Force-on-Force Training: Why you Need It 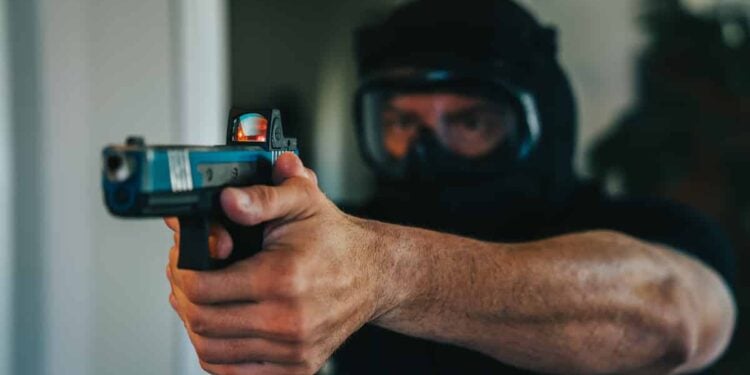 The concept of training for violence is hardly new, although it may still be as misguided as ever in most professional capacities. Training has always had a tendency to become dogmatic. I have heard from many a combat vet from Vietnam that their marksmanship training was preoccupied with qualifying at 200 yards with their rifles. Yet, their first combat experience consisted of shooting at attacking enemies in the dense jungle within 20 yards. We can find many such examples of ill-suited training practices in law enforcement as well. And, assuredly, the most common fallacy we find in the world of civilian concealed carry training is a preoccupation with casual square range shooting. Plinking at static paper targets is a needed part of skills development and maintenance, but it is only one part of skills development, and it is certainly not training to fight.

A form of firearms training that has come on the scene to a greater extent in the past decade is force-on-force. This refers to scenario-based training in which the participants work against live role-playing opponents. In its best form, this force-on-force is conducted with simunition guns, which are modified firearms that fire a high-speed but non-lethal paint bullet that inflicts some pain and requires the use of protective gear. Such force-on-force training is the most realistic we can make the training experience short of an actual gunfight. Good force-on-force training is hard to come by, but it is one of the most worthwhile activities the serious self-defender can participate in, and it simply has no substitute. There are three lessons that you will learn in such training that is difficult to acquire elsewhere:

#1. The Human Adversary is Fast and Unpredictable

The first benefit of force-on-force is that it teaches the participant how fast and unpredictable a human adversary is. Shooting at paper targets when an instructor yells “threat!” might help to ingrain fundamental skills, but it in no way prepares you to deal with a human adversary. Such reliance on only static targets in training leads to a significant disconnect between such square range mentality and the reality of conflict. Once we get used to shooting at targets, we get conditioned to a non-reacting, stationary threat, which is not at all life-like. The paper target provides no movement and no interaction. Most people have a true epiphany when they do force-on-force for the first time and realize how fast a human opponent moves, and how unpredictable and potentially frightening it can be.

When done well, force-on-force adversaries will emulate all of the deception and malice of the criminal element. Good scenarios will not only focus on shooting and fighting but decision making as well. After doing several such scenarios, you will realize that a human being can be exceedingly unpredictable. A situation can instantly morph from one in which there is no legal right to use deadly force, to one in which force is immediately required. Good scenarios will also expose those times where you might find yourself too fast to use force, only to realize after the fact that had this been for real, you would have significant legal problems.

In force-on-force, you will also find that a human being can move faster than you ever realized. A focus on the hands is of utmost importance, as the hands of the human are the danger. Those hands can produce a firearm or other weapon seemingly instantly. And, if separated by what may seem like a comfortable distance, the adversary’s feet can carry him to you in an instant, making contact weapons such as knives or impact tools more deadly than you previously realized. Such human speed and unpredictability can only be experienced when squaring off against a person. It can never be learned when shooting paper.

#2. Tunnel Vision is a Real Thing

It is the norm to get fixated on what you perceive to be a threat. In our daily lives, we don’t often encounter such things, so participating in force-on-force will expose you to the fixation and tunnel vision that occurs when focused on an individual that manifests themselves as a threat. After scenarios play out in such training, participants are often surprised by what they did not see, such as a present weapon that goes unnoticed or additional adversaries emerging on scene that escape detection. The human tendency to intently focus on the single known threat is difficult to break out of, and force-on-force training will illuminate this instinct.

Techniques that you can integrate into training, such as forcing yourself to scan the environment for further threats so as to have a trained mechanism for breaking out of tunnel vision, can be of great benefit when dealing with such scenarios. Participating in force-on-force will put you in a situation where you can experience this focus lock first hand so that you can better prepare for it in your routine training.

#3. Gun Handling and Shooting Must be Second Nature

When functioning under the dynamic circumstances of a violent encounter, even one that is simulated in force-on-force training, you will quickly realize that your shooting and gun handling must be trained to the point of second nature, or you will not be able to use the gun to its potential. In fact, many realize that they not only fail to make hits during such scenarios, but they also fail to get the gun deployed or induce malfunctions due to poor grip or other user-induced obstruction.

The most common form of training that we do as shooters is square range drills on paper targets. Such practice allows one to focus all mental energy on the actual mechanics of shooting. When put under duress, the brain does not have the capacity to focus on the shooting as it is occupied with observing and reacting to the threat. If shooting and gun handling skills are anything less than trained to reflex, those skills will fail under many dynamic scenarios that require your concentration to be on the opponent.

While force-on-force scenario training is certainly harder to come by than most other forms of firearms training, it is absolutely worth the commitment. Seek it out.

[UPDATED] At Least 7 Dead Including Shooter at Milwaukee Molson Coors