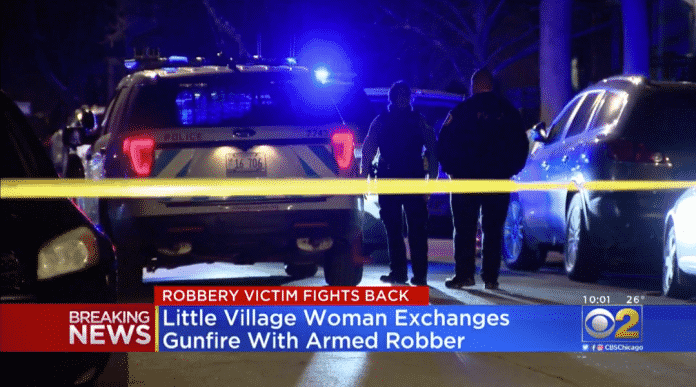 We don’t have a whole lot of details on this one, but there are a few things we can take away and make us think.

Yesterday evening, a 33-year-old woman was outside of her home when a man with a gun attempted to rob her. She was having none of this and pulled out her own gun. Both of them fired shots, but no one was hit, and the suspect ran off.

The woman does have a Firearm Owners Identification Card and an Illinois Concealed Carry License.

So first off, you can find numerous articles online that state that women with guns don’t make them safer. Well, it seems like that worked out pretty well for the women in this incident. Who knows what would have happened if she didn’t have a gun to protect herself. Maybe the suspect would have just robbed her and ran off. Perhaps something more tragic would have happened. But luckily, she took steps to protect herself and her property by not only getting a concealed carry permit but actually having it on her.

And this brings me to the next takeaway. I’ve said it before, but you always need to be carrying. You never know when bad guys will do bad things, so make sure you are always prepared, even if you are just hanging out in front of your house.

And lastly, we should touch on drawing against the drop AKA drawing when the bad guy has a gun drawn on you. Again, we don’t have many details on this incident, and it worked out great for the woman involved. But there are numerous videos online of incidents that show why it is generally a bad idea to draw against the drop. I think the situation would play a big part in this as well. Is the bad guy just trying to rob you of your wallet at gunpoint? It might be a better idea just to fork over your wallet.

Again, these are just things for us to think about. It is good practice to run scenarios in our head and go over how you would respond to these types of encounters. The more you do this, the more you’ll be prepared if you find yourself in this situation.