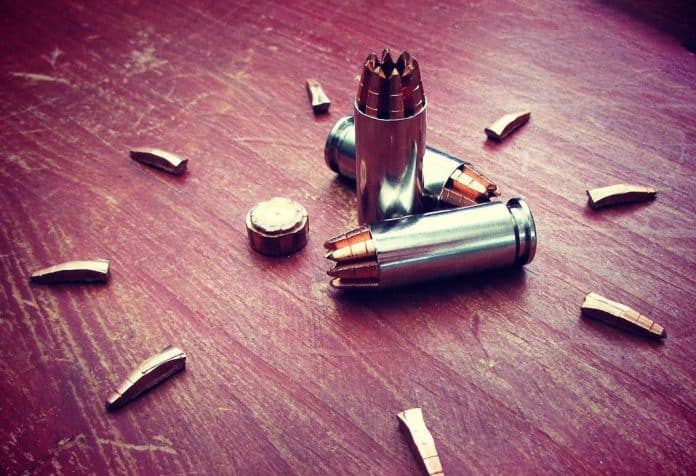 Some people are concerned about possible over-penetration in the home environment and start using frangible ammunition or fragmenting ammunition. Several frangible hollow points are available at the moment, intended for use as self-defense ammunition.

You can find boxes/brands billed for this purpose like Liberty Civil Defense, Federal SynTech Defense, and G2 Research’s RIP and Telos rounds and so on.

Are they a better solution for self-defense than traditional jacketed hollow points? You might be onto something. Is this type of ammunition desirable as a carry load?

Balancing Out The Equation

Non-target ammunition is made to balance a number of attributes toward a specific goal.

For instance, a hunting round like Remington Core-Lokt, Nosler Partition, Swift A-Frame or Scirocco, has to be accurate. When the bullet arrives, it has to penetrate deeply and expand, but in a controlled fashion. Big game hunting means the bullet has to have adequate crushing power to get through bone to other vital structures, so it has to retain the lion’s share of its weight and only partially mushroom.

A hollow point for use in pistols usually is designed to favor expansion or penetration while hopefully doing both. Some strive for both, but most tend to lean to one side or another. Brands/boxes like Speer Gold Dot, Federal HST, and Winchester PDX tend to favor expansion.

The problem, of course, is what the potential downsides are.

A bullet that doesn’t expand reliably will just go through the target, which is not what self-defense ammunition is supposed to do. A bullet that expands too much and loses petals and the jacket and so on doesn’t get to sufficient depth to damage vital structures. That’s why typical JHP rounds usually are designed for something like a 60/40 split. Most modern JHP rounds favor dramatic expansion over penetration.

What Fragmenting Hollow Points Do

The way it works is that the nose fragments upon going into the target, sending several fragments into the body. The core of the bullet continues going.

Typically, the core will penetrate to what would be considered sufficient depth in gel testing (at least 12 inches, per the FBI’s 12- to 18-inch standard) but come to a stop. Since half the bullet is fragmented, much of the projectile’s kinetic energy has been dumped into the target, and the core will reliably stop.

Another benefit is that many of these rounds are lead-free, reducing exposure during shooting sessions but also – if you happen to shoot outdoors – reducing environmental impact in the bargain (ask waterfowlers; duck and geese hunters are often forbidden from using lead shot) in case you happen to care about that sort of thing.

On paper, this type of ammunition has a lot of advantages. But does that mean it’s a better type of carry ammunition than a jacketed hollow point?

It can be. But there are a few things you should be aware of.

The nose cone peeling away into several pieces (such as G2’s “trocars” of the RIP rounds) won’t necessarily amount to much. Yes, they can punch holes in arteries and organs, but that doesn’t actually buy you much from a handgun. For that to matter, you need a sudden and catastrophic drop in blood pressure. This requires a large permanent wound cavity, which requires a rifle or shotgun.

A 12-gauge slug will do that trick nicely. A little ole’ 9mm? Not so much. The core will still penetrate to sufficient depth, but it does need to be placed correctly.

Another thing to be aware of is that not all ammunition manufacturers test their ammunition to the same standards. Some, such as Honor Defense and Federal, subject all defensive ammunition to the FBI protocols. While the FBI’s ammo test isn’t perfect, it has been proven to be a reasonably reliable predictor (not guarantor, just a predictor) of real-world performance.

To sum up, frangible or fragmenting ammunition is a worthy choice of carry ammunition…if you buy the right kind.