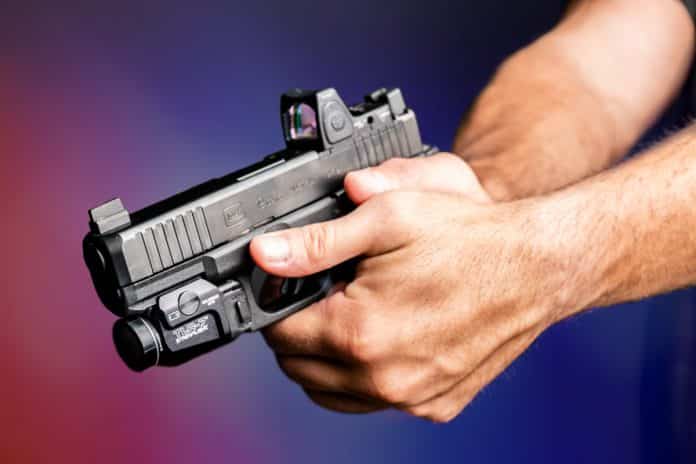 In the past couple of years, we have witnessed several high profile examples of civilians getting killed by responding police officers in the aftermath of a defensive gun use. In these tragic incidents, these folks have been a legitimate self-defender or an individual who has defended another innocent party but ended up killed by responding law enforcement. Depending on where such a defensive gun use takes place, the possibility of a fairly quick police response is high. We often discuss the need to be able to protect one’s self because the police can’t be there fast enough. But there are locations and times where law enforcement may be right in the vicinity. This being the case, anticipating a police response following a shooting, or even the display of a gun in a defensive manner, needs to be part of the armed citizen’s mindset.

When a police officer responds to a call for a shooting, or simply a person with a gun, upon arrival, the officer has no clear idea of what the situation actually is. The officer is looking for a threat with a gun in hand when getting to the scene. When the police arrive, you are in a very dangerous situation if you are the person with a gun in hand. How would you presume the responding officers will view you? They don’t know the whole situation. Acknowledge that the responding officers are concerned for their safety and the safety of others in the vicinity. Now is the time to think through how you would handle the police response.

Keep the Gun Holstered Unless Needed

Before delving into handling responding officers consider the chaos of a situation proceeding the potential need to draw your gun. If you are in a public location and you hear gunshots but don’t see a threat in the immediate vicinity, keep your gun holstered. The idea of drawing your handgun and running towards the sound of gunfire opens you up to all sorts of potentially deadly complications. This is not a discussion on whether or not you should escape or respond to a threat, but a call to be mindful of your surroundings. If the gun comes out before it is immediately needed, you risk being engaged by a fellow armed citizen, or, of course, responding police officers. When an armed citizen or a police officer hears gunfire, they will be looking for the threat, and the threat is a person with a gun in hand.

Similarly, consider the moment after the use of force. If you must draw and use a firearm to stop a deadly threat, what happens next? We certainly don’t want to put the gun away if the threat is still active, or if there is the possibility of other threats in the area. However, if the immediate threat has been neutralized getting the gun re-holstered is the safest thing to do to avoid being engaged by responding police. And neutralized can mean the attacker is immobilized or has fled the area.

As soon as you are able, you should call 911 after a defensive gun use, even if you did not need to shoot. Following a defensive gun use, the eyes of the justice system often see the first caller to 911 in a more favorable light. It is not uncommon for criminal actors to call and report a self-defender who deployed a gun in a defensive manner. Once speaking with the operator, briefly explain what just happened (I was attacked, I defended myself, send help) but tell the operator what you look like.

This description may make it to the responding officers, and that description may go a long way in making the police response safer for yourself. If police spot the reported self-defender based on the description, they may be less likely to quickly engage the individual that at first appearance is deemed the threat. Still, having the gun out of hand is best practice.

Now we delve into a possible, but exceedingly dangerous, circumstance. The need to hold an individual at gunpoint until police arrive has played out many times in the real world. Upon encountering armed resistance, many criminals will comply, even if no one has fired shots. This puts the self-defender in a precarious position. Keeping the gun in hand may prove the best way of maintaining safety, as the intimidation of the drawn weapon may keep the criminal actor in line and compliant. However, a responding law enforcement officer may see only what is obvious at first glance: one dude pointing a gun at another dude. Always bear in mind what the responders might see from their perspective.

If at all possible, getting some distance from the threat that has surrendered and getting behind some cover is the best strategy that can provide more options. If you have some distance and cover, you may be in a position that allows you to get the gun holstered, even if your hand is still on it. This puts you in a better position to receive the responding law enforcement, as the gun is no longer in hand, and the situation will be much less tense.

Re-holstering Not an Option?

What if you can’t get the gun re-holstered for some reason? Or perhaps you utilized a gun that you took from somebody else. Maybe you grabbed a gun from a downed police officer, another citizen, or a downed criminal actor (it has happened many times). Then you will need to use another strategy. One option is to set the gun on a counter, or table, or somewhere that you can keep it immediately close, yet get it out of your hand. Again, the possibility of the threat re-animating, or another threat emerging, may outweigh the danger of the police response. But, if the threat is neutralized or has surrendered and complied to commands, the responding officers may pose the greatest threat to you.

When officers arrive, comply with their commands. If you have re-holstered your gun, do not make any sudden or apparently threatening moves with your hands. Keep your hands in the air and visible. When the officers approach, calmly tell them you are armed and tell them where on your body the weapon is. Do not reach for it. If they cuff you, comply, do not resist. Remember that the officers probably don’t know what has just happened. And their main priority is to secure the scene and render any possible threats safe.

The moments after a defensive gun use in which police officers are responding can be very hazardous for the self-defender. Think through your response well beforehand.