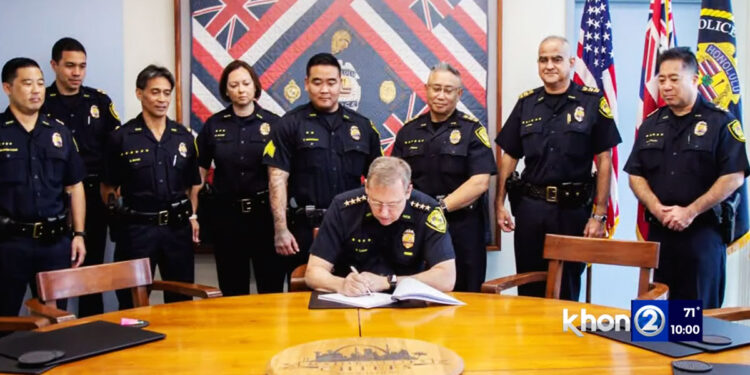 Hawaii concealed carry permits were the hardest in the nation to obtain, with fewer than ten being issued in the last 20 years. However, the NYSRPA v. Bruen decision has changed the landscape, resulting in the first permit to be issued in Oahu in years being granted by the chief of the Honolulu Police Department.

While certainly progress, there are still looming concerns about the future of concealed carry in Hawaii and elsewhere in the United States.

The chief of the Honolulu Police Department, according to Hawaii News Now, has just approved the first concealed carry permit for the county of Oahu since the Bruen decision.

The approval of a single concealed carry permit is otherwise not newsworthy in much of the United States but most certainly is in Hawaii, which has notoriously been the single hardest state to obtain a carry license from.

As of August, per Hawaii Public Radio, only one permit had been issued in the wake of the ruling, meaning that so far, only up to two have been granted.

However, two permits in the last five months is blistering compared to the Aloha State’s previous pace of issuance. It was previously reported (as well as mentioned in court documents) that none were granted from 2013 to 2019, and state data shows that only six had been issued since 2001.

Hawaii concealed carry permits are valid only within the county they are issued; the permit issued recently is for the county of Honolulu. Technically there are five, but Kalawao county – population: 90 – is a judicial district of Maui county.

Honolulu county and Maui county are the only ones to have made public-facing changes to their concealed carry permit issuance policies as the state now comes to grips with reversing decades of operating almost as a no-issue state.

Along with having to consider permit applications more seriously, Hawaii’s police departments require proof of proficiency and training as well as a background check. While only a few thousand applications have been received, the state is anticipating upwards of 60,000 to come based on how many permit holders relative to the population there are in other US states.

However, Hawaii has also enacted a “sensitive locations” law, much like New York and New Jersey, limiting where permit holders may carry.

Progress In Hawaii Concealed Carry…But Uphill Battles Are To Come

While Bruen was a godsend for those who recognize the right to bear arms as being an actual right, there are a number of serious fights in the years to come.

Along with pressure from the White House and select Democrats in the legislative branch, several states are planning to do whatever they can to limit what guns you can own, magazine capacity, where you can carry as well as state pre-emption.

In the days following the decision, New York, New Jersey, California, and Hawaii announced and passed laws further restricting where one can carry a gun.

Oregon and Washington state have passed magazine restrictions, Oregon has enacted the toughest permit-to-purchase law in the nation, and Washington state’s governor and attorney general have announced their desire to ban “assault rifles” if not all semi-automatic firearms.

It’s outstanding to see progress, but there are some incredibly tough battles in the coming months to preserve the Second Amendment as we know it.

Intoxicated Man Gets Shot By Homeowner After Entering the Wrong Apartment