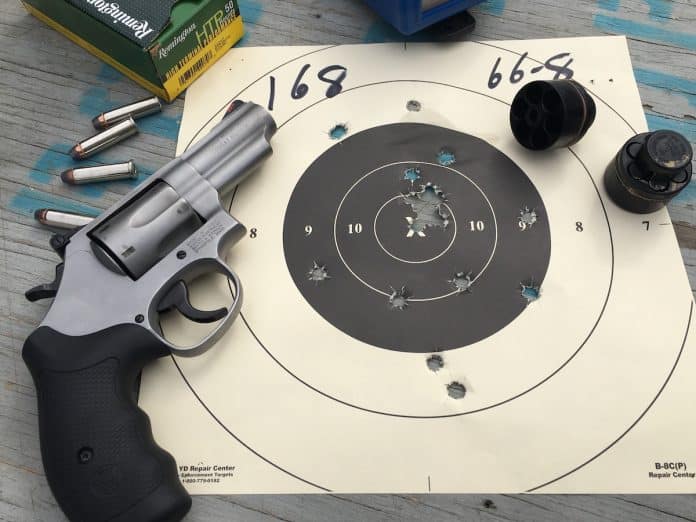 Quite a few people are familiar with the Test (alternatively called the 10-10-10) that was created by Ken Hackathorn. The guys at Hardwired Tactical Shooting (HiTS), Daryl Bolke and Wayne Dobbs, came up with the Super Test. It is an adaptation of Ken Hackathorn’s Test and adds two additional strings of fire to round the drill out a bit. The normal Super Test, calls for additional 10 round strings at 15 yards and 5 yards with their own respective par times. It adds some layers to the original version of the Test. I outline the course of fire below.

While the time standards may seem generous to the more ambitious shooters out there, when coupled with the accuracy standard required in the drill, I think there will be few perfect scores. Certainly, very few perfect scores shot on demand, without any warm up. As I discovered on my first string, it is easy to focus too much on the accuracy component and miss the PAR time. You should use an NRA B-8 repair center for this drill. There are printable versions of that target available too if you google “printable B-8 repair center”.

Scoring for this drill uses an actual point value. So the 9 ring is 9 points, and the 8 ring is 8 points. Some people also keep up with the X count (number of hits in the X ring). Honestly, for my purposes, I just track the score per string. Once I get good enough to have less variance in my scores per string, then perhaps tracking the hits in the X ring will be of more value. If using the drill for competitive purposes, use the X count as a tie breaker if two shooters end up with identical scores.

There is one problem with the Super Test. It relies on 10 round strings of fire. And many of the guns that people carry daily do not hold ten rounds. Until the P365 came around, a gun in that size category with a 10 round magazine was not all that common. Fortunately, the HiTS guys realize this, and there are two other versions of the Super Test, the Revolver Super Test, and the Snubby Super Test.

The Revolver Super Test is useful not just for revolvers, but also for guns like the Ruger LCP, Glock 43 or 42, S&W Shield, et al. It is the version that most of the smaller autos can be shot on and not have to worry about getting reloads into a par time.

If anyone out there is still shooting a J-frame, the Hardwired guys also have their Snubby Super Test. They acknowledge that with J-frames and the like that shooting with the level of accuracy required by the B-8 target that is at 15 yards might be a bit of a stretch, so they reduce the distances in the snubby version.

Suggestings for Shooting the Super Test

For the normal Super Test, I would recommend using a clean target for each string of fire. It makes scoring much easier. For the revolver and snubby versions, I think a single target is doable since the total round count is significantly less. To pass, you must score 90% of the possible points. For the normal version of the drill that means we need 270 or better to pass, for the revolver version, 162 to pass, and for the snubby version 135 to pass. If we don’t think any of these tests are difficult enough shooting from a ready position, we can turn them into the Advanced Super Test by shooting them from a holster under concealment. That eats up a second or two and effectively reduces the PAR times and that is how I shot the test in the included video.

I enjoy shooting these tests. They are a good measure of a person’s ability to really manage the gun and be very deliberate in their shooting while still applying some measure of speed. Since there are a few different versions, it is also applicable to pretty much any gun that is out there and worth carrying. If you give the drill a try, be sure to let us know how you did in the comments.

what kind of times for a single action .22?