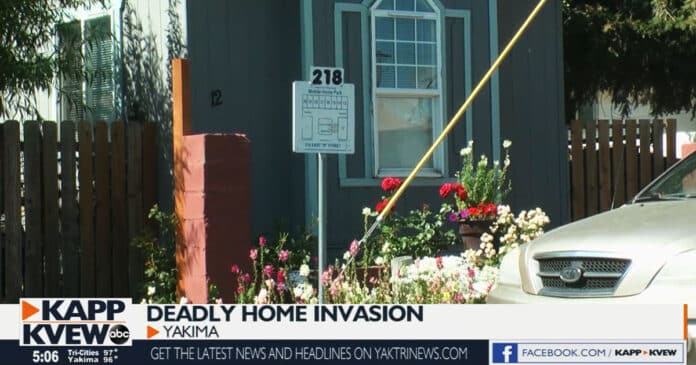 A 34-year-old man in Yakima, WA, arrived at his home in the Almost Sunshine RV Park with his girlfriend and six children aged 7-14. The father found a man in his daughter’s bedroom, who he then would shoot and kill.

“The daughter went into her bedroom and found that there was a man in her bedroom,” Capt. Jay Seely of the Yakima PD said.

The mother grabbed her child and called 911 as the father grabbed a pistol and confronted the intruder. Over the phone with emergency services is when gunshots were heard, and arriving officers found the family outside their home unharmed and the suspect dead on the scene with gunshot wounds to his chest.

The intruder, 38-year-old Joe Mendoza, was actually a next door neighbor to the 34-year-old and their family.

“We do know that he forced his way into their house,” Capt. Seely said. “He pushed an air conditioning unit out of the bedroom window and climbed into the bedroom.”

The neighbors spoke more on the intruder, saying Mendoza was odd and that they would make sure their kids were not out when he was, as he was prone to looking through others’ windows. Ironically they did not suspect he was worrisome enough to burglarize a home.

According to Seely, Yakima County Prosecuting Attorney Joseph Brusic will not be filing charges , “unless the investigation determines that there is some other information that we weren’t aware of and at that point they can change course and file charges.”

What was said during the confrontation is still to be found out, but the homeowner had every right to eliminate this threat, especially one standing in his daughter’s room. Fortunately for the gun owner, and rather obvious, he has not and hopefully will not be charged.

Also, with the neighborhood speaking of the oddness of Mendoza, it would be enough for any gun owner to be on high alert. It is questionable still to think that they were even surprised he committed burglary.

Besides arming yourself and implementing proper self-defense skills, a useful yet overlooked mechanic of safety is making it a habit to check your home when you arrive back. As cliche as it sounds, you can never be too safe. It is the simple things that when all put together, makes sure you and/or your loved ones are safe and prepared for danger.

one for the good guys