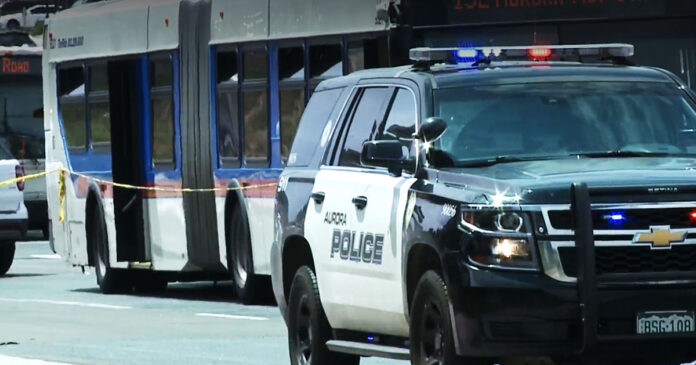 A 23-year-old man was riding a bus in Aurora, CO with his wife and 18-month-old daughter. In a nearby seat, a teen was vaping which is not allowed on public transportation. At first, the vaping teen ignored the couple but after the third time they asked him to stop he stood up, cursed all three of them, and then started swinging at the wife and baby.

The husband, who is also a bounty hunter, threw himself between the attacker and his family and did his best to ward off the attack but the teen got him on the floor of the bus between a couple of seats.

The man later testified, “I tried my best to defend myself before I used a weapon, and, in the end, I had to shoot him. I was losing consciousness, the man was on top of me beating me senseless and he said, ‘I’m going to kill you.’ And I told myself, ‘If you lose consciousness, he’s going to follow through with that threat.”

So the husband drew his gun and shot the teen once in the chest. The teen then walked off the bus and lay down on the ground.

According to police, the bus security video backs up the husband’s account and the husband will not be facing any charges though he has lost his gun to the prosecutor’s office as evidence until the case is concluded.

This one is pretty textbook. The husband meets an initial unarmed attack with unarmed physical force to defend his wife and young daughter. It was only after the attack against him turned potentially deadly, in other words, he was losing the physical fight, that he resorted to deadly force. And even then he only fired just the one round to end the attack.

His actions showed that he restrained himself from going to his gun until he felt he had no other option and when he did he still only used just enough force to stop the attack. A very major bonus was that the entire incident was recorded on the bus video.

Note that he is without his gun for an indeterminate amount of time. Some firearms trainers will comment that having an identical backup gun will allow you to continue to defend yourself should your primary gun end up in an evidence locker for whatever reason.

Take the serial number and photos of the gun and give it back to the victim. What kind of logic says to disarm the victim for an indeterminate amount of time, by taking his defensive ability away?

Logic has no place in the government