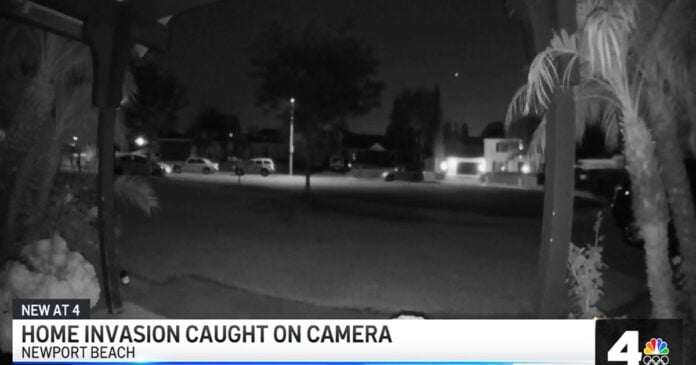 A man who broke through the front door of a California home was shot and killed by one of the residents.

“Around 4:15 or 4:20 a.m. there was extreme banging, it sounded like it was in our backyard,” Amy Lee of Newport Beach told the Orange County Register. Others heard a man swearing.

Neighbors and officers responding to the scene then heard the sound of gun fire. The unidentified intruder was found by the Newport Beach Police Department dead inside a home.

“He’d been around the house for like 20 minutes then came around to the front and broke the front door down, that’s when he entered the house,” neighbor Bill Finster told KNBC.

Police say the fatally shot intruder might have been mentally ill or intoxicated as the investigation remains ongoing.

Whatever state the intruder had been in, we must always stay vigilant and self-aware as much as possible around our homes of those potentially looking to cause harm.

With the break-in occurring early in the morning, of course, most people are likely not awake, but that does not mean we should not have a home defense plan readily available.

With that being said, we should consider the accessibility of our home defense gun. Are they stored in a quick-access safe or is it in arms reach of your bed? Home security systems are also something to think about, but not everyone can afford the highest end of them. Still, something like an inexpensive camera can help with evidence or as a possible deterrent for the potential of a self-defense shooting.

Again, home defense plans require the best amount of vigilance and situational awareness so that we are better served if/when a self-defense shooting occurs.