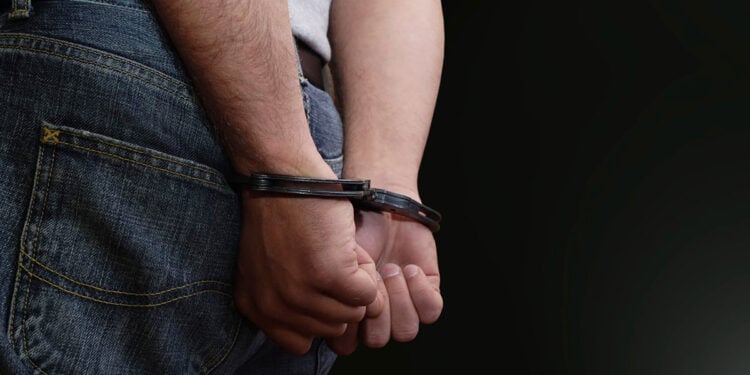 I usually steer clear of putting my personal opinion on politics, but enough of that on this one. Illinois is trying to make felons out of hundreds of thousands of law-abiding gun owners. HB 5471 was just signed into law, and you would have thought after the royal screw-up of the SAFE-T Act that went into effect on January 1st, they would have learned a lesson, but I guess not.

The most recent law enacted by the State of Illinois is really causing an uproar, and it is developing into somewhat of a state civil war in less than two days. The state legislature may have voted HB5471 into law, but most of the state’s sheriffs are pushing back, and they consider it to be unconstitutional. When the SAFE-T Act passed, they said they COULD NOT enforce measures in it because of how it was written. This time they are saying they WILL NOT enforce HB5471, which is a big difference that should be a big red flag for every law-abiding gun owner. This law is not just about what people think are scary assault rifles but about limiting handgun options too.

This was so well thought out that one gun listed was the “UMAREX UZI rifle.” I wonder if it is the 22 LR or the BB-gun version. Airsoft guys, beware; you are possibly about to become felons too.

Here is a great map of all counties that have said they will not enforce the ban as of the time of this article. Remember, this is ONLY 24 hours after Pritzker signed it into law, and the majority of the county sheriffs have already joined in. 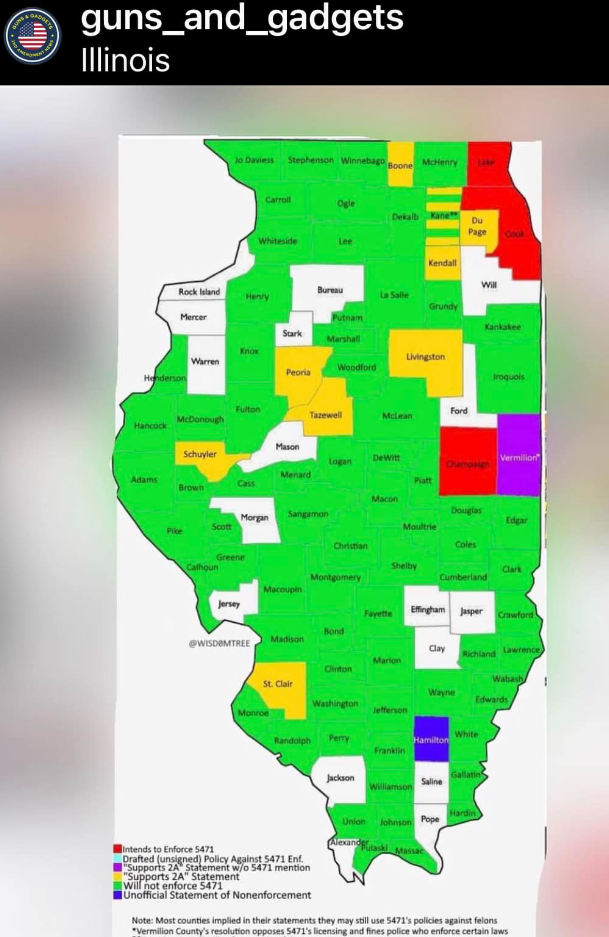 Most county sheriffs have released statements saying they believe the bill is unconstitutional.

“As your Sheriff, I wanted to give the citizens of Franklin County an update on the recent passage of HB 5471, also known as the Protect Illinois Communities Act.

As your duly elected Sheriff, my job and my office are sworn, in fact, to protect the citizens of Franklin County. This is a job and responsibility that I take with the utmost seriousness. Part of the duties that I accepted upon being sworn into office was to protect the rights provided to all of us in the Constitution. One of those enumerated rights is the right of the people to keep and bear arms provided under the 2nd Amendment.

The right to keep and bear arms for defense of life, liberty, and property is regarded as an inalienable right by the people. I, among many others, believe that HB 5471 is a clear violation of the 2nd Amendment to the US Constitution.

Therefore, as custodian of the jail and chief law enforcement official of Franklin County, neither myself nor my office will be checking to ensure that lawful gun owners register their weapons with the state, nor will we be arresting or housing law-abiding individuals that have been charged solely with non-compliance of this Act.” 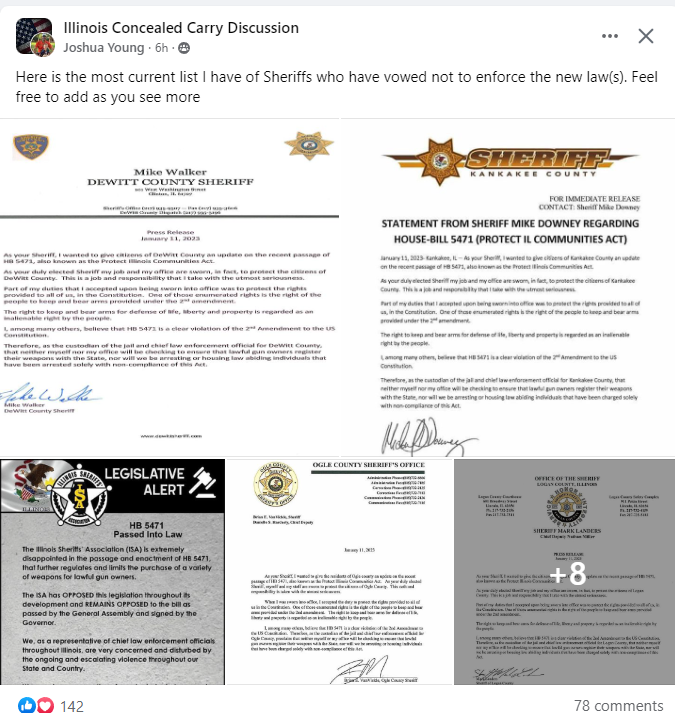 The state’s attorneys have also started in. 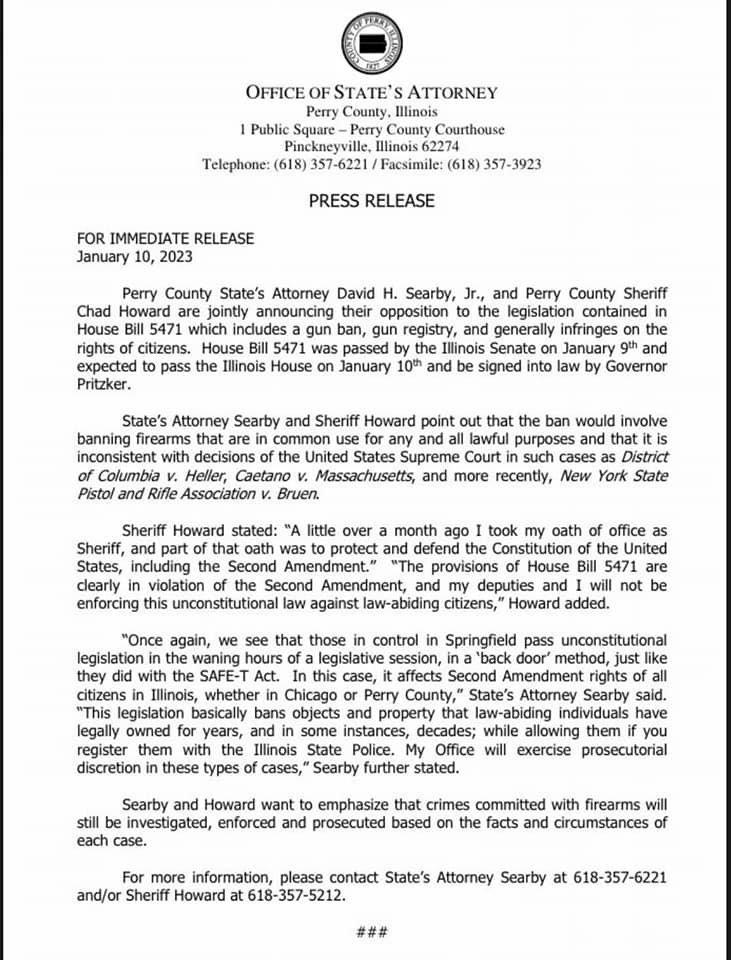 Governor Pritzker said this during his press conference in response to the members of law enforcement that have said they will not enforce it, “As are all law enforcement all across our state, and they will, in fact, do their job, or they won’t be in their job.” Someone might want to explain to him that it will not happen because we elect sheriff’s officials, and they are not on his payroll. 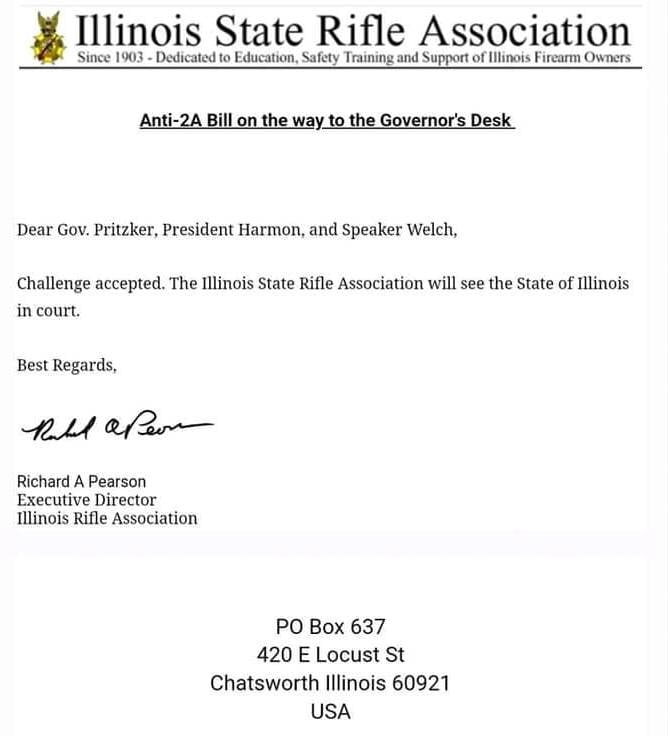 State Rep. Blaine Wilhour, among others, made his feelings on it clear: “We will not comply, and you’re not going to do a darn thing about it because the law, the Constitution, and the founding principles are on our side.”

I reached out to John Boch from Guns Save Life, a gun rights advocacy group out of Illinois, to see what he had to say. “Gun control like this bill disarms victims, not criminals.  And it’s unAmerican. They’re banning America’s favorite rifle, the AR-15, and millions more like it.  They’re banning the hottest-selling self-defense firearms.  For a while there, before the initial proposals were watered down, it almost looked like the legislation should have been titled “Make Revolvers Great Again.”  The Illinois General Assembly has nothing but compassion for violent criminals and nothing but contempt for our state’s law-abiding gun owners. The governor said that we don’t get to pick and choose which laws we’re going to obey.  That’s pretty rich from a guy who ignores federal immigration laws on a daily basis.”

I agree that violent crime in this state is out of control, but most of it is in Chicago, not the rest of the state. Do the politicians really think that coming down on law-abiding citizens and making them criminals, even worse, felons overnight, is the solution? They also need to look at the facts published by the FBI that say only 2.6% of homicides are committed with rifles, while 4.3% of homicides are committed by someone using their hands, feet, fists, etc.

This Twitter user probably sums it up the best. 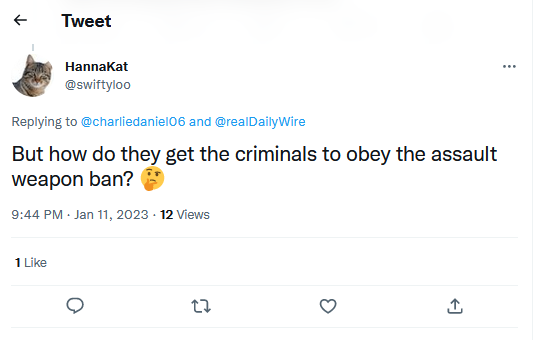 I’M SO GLAD TO SEE THAT MOST OFFICERS REALIZE THAT IF THEY LISTEN TO THAT BUFFOON IN THE GOVERNORS OFFICE THAT WOULD HAVE THEM VIOLATING THEIR OATH OF OFFICE. NOW WE NEED TO IMPEACH THAT GOVERNOR AND MAKE AN EXAMPLE OUT OF HIM.RUN THAT BANTY ROOSTER WITH HIS CHEST ALL PUFFED UP WHEN HE PROUDLY ANNOUNCED HE WOULD BE RUINING HIS CAREER. RUIN HIM FROM EVER HOLDING ANY KIND OF OFFICE