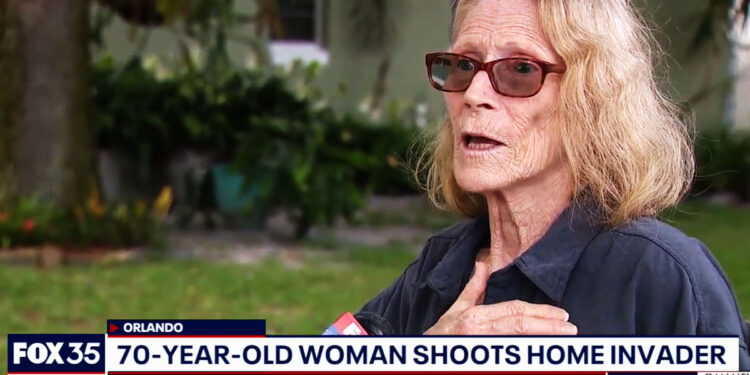 A grandmother shoots a man after getting cornered in her backyard by a home invader. She not only warned him while they were inside her home, but she attempted to retreat out her back door.

On Sunday, a stranger walked into a 70-year-old grandmother’s home in Orlando, FL. A 38-year-old male entered through her unlocked front door. She hit him two times in the face with a broom, and the guy just had a blank stare.

“I heard the door handle kind of rattle. And then the door opened, and the guy stepped in my house,”

She told her 80-year-old male partner to get his gun and said, “Charlie shoot him, call 911” Charlie shot into the ground, but the intruder followed the woman into the fenced-in backyard.

“I didn’t know what he was going to do, but I knew I was going to protect myself. I’m a fighter. I’m going to defend myself. I have feelings. I have God in my life. That’s my main thing, wondering if God’s going to forgive me for taking a life. It bothers me.”

People often forget about the mental aspect of surviving a confrontation and focus their training on physical skills. Firing a warning shot is never a good idea, and this couple both did it. She may not have shot him initially because she didn’t want to take his life, and that’s understandable. On the other hand, the home invader may have tried to kill her and the man of the house.

“I had to do what I had to do to protect myself and Charlie” Hopefully, she remembers that as she reflects back on what happened.

There’s nothing wrong with defending yourself. You not only helped protect your home but also yourselves and your community.

Where did her first shot (warning shot) go? Warning shots are dangerous.

They never said where either one went or if they fired into the air or into the ground. Either way, you are correct not an intelligent decision

What the heck was he thinking he can just walk right into someone house. Must have been crazy I would protect myself to and who ever else is in the house. But there wouldn’t be a warning shot, I sick the dog on him. Then shot if he didn’t leave, my house get out. Self defense!!!!!