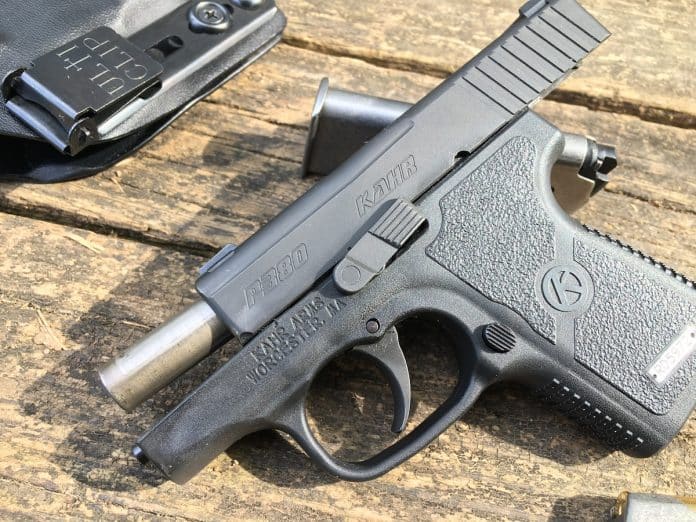 Pocket guns intrigue me. Probably for the same reason revolvers do. Even though they are often touted as the easiest guns to carry, so everyone buys one, they are really expert guns. The reason they are expert guns is that they are generally pretty difficult to shoot well by any objective standard. I like doing things in hard mode, I guess—this time, with the Kahr P380.

Kahr firearms have a reputation of being hit and miss, so keep in mind this is a sample of one and that automatically comes with a few limitations. If you are not familiar with the P380, it is Kahr’s higher-priced stab at the small .380 market. They have a lower cost .380 in the CW380 that is nearly the exact same gun. For the most part, the differences are rather minor. Mostly in the sights, the P380 having all-steel sights, some of the engravings on the slide, and the type of rifling in the barrel. Functionally, and in practice, the guns are essentially the same.

The P380 is a svelte 6+1 single stack, striker-fired handgun. Even though the Kahr is striker-fired, the trigger mechanism has a short double-action feel to it. The trigger press is very smooth, without a clearly recognizable “wall” just before the shot breaks. Instead, the trigger rolls through the break with relatively constant pressure. Personally, this is to my taste and is why I tend to be a fan of Kahrs (this isn’t my first one). Relative to other pocket guns, it is a nice trigger. It isn’t the super light, glass rod type trigger that most people seem to like these days, though.

What It Does Well

The P380, for a pocket gun, has acceptable sights. They are a bit short but certainly usable. The handgun is available with night sights as well, or with standard i-dot sights, which is what is on this particular sample. Perhaps more important than coming with decent sights is that there are high-quality aftermarket sights available as well. Just like how we all change the fantastic plastic sights on our Glocks, we can also do that with the P380. Dawson Precision makes sights that are compatible with the P380 for those wanting to go that route. While I have not specifically used Dawson’s sights on the P380, they are my go-to for every other handgun I have, so I am confident they would be a step up. 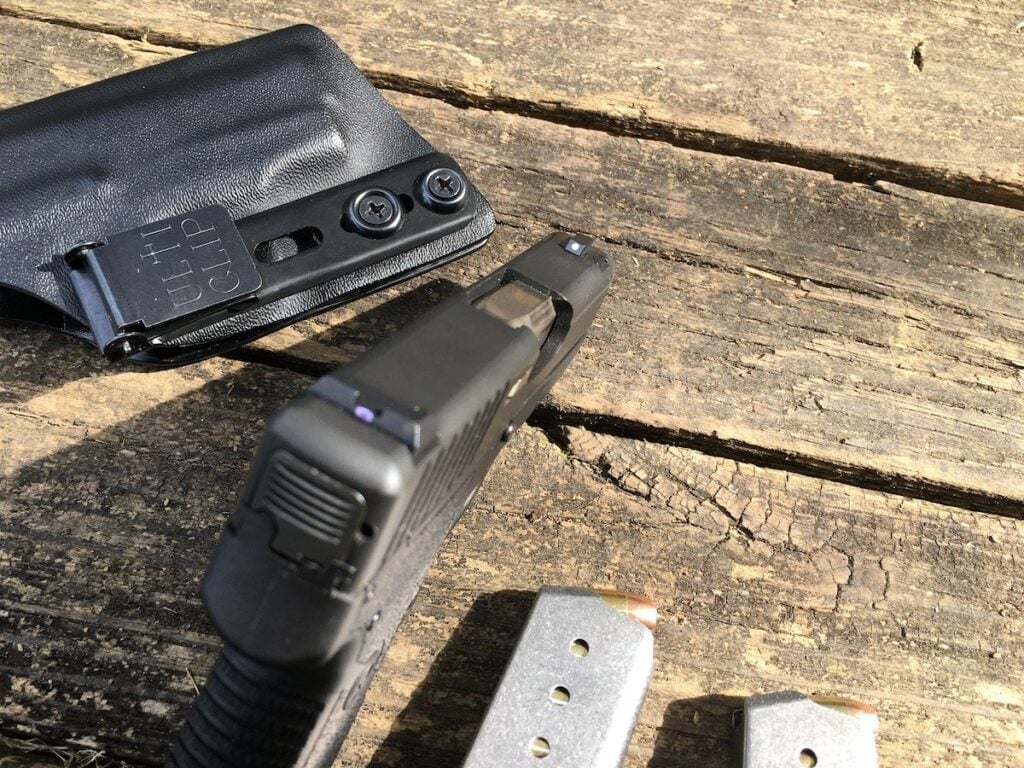 As with most small .380’s, the P380 carries easily. For purposes of comparison, it is essentially the same size as a Ruger LCP, except with better sights and a better trigger. There are plenty of pocket holsters available for the P380. If the intent is to carry the gun on the belt, the list is quite a bit shorter, but there are still some options out there.

Shooting the P380 and Reliability

With my particular P380, I did not experience any function issues using standard quality brass cased ammunition. Past experience told me that Kahr’s don’t like steel-cased ammunition, so I didn’t really try. The accuracy of the handgun in factory configuration is sufficient, but I think better sights would help more. As with any ultra-small handgun, getting acceptable levels of accuracy at extended distances can be difficult. With such a short sight radius, any small deviation in the sight alignment has a massive effect on the target. My limit for what I would consider “acceptable” accuracy (hits on 8” circle) with the P380 is just a touch over 25 yards. Obviously, shooter skill plays a part, so someone could stretch it further, I think. 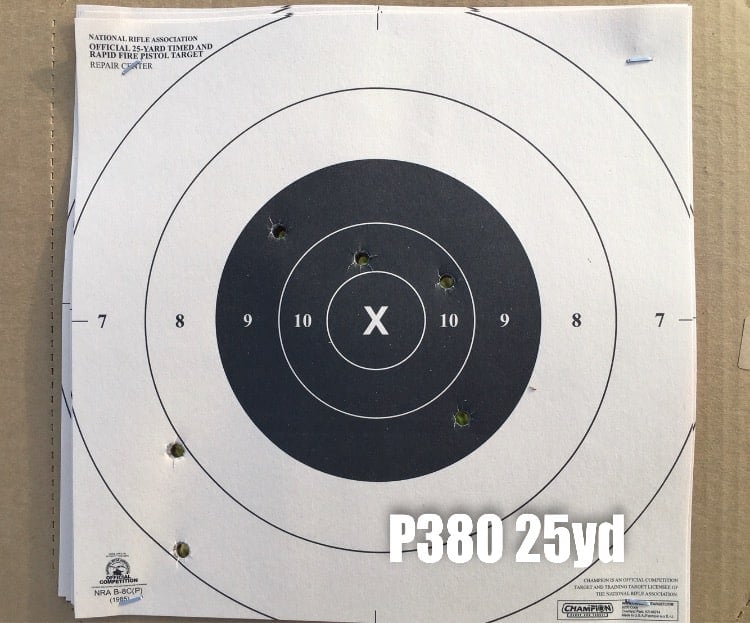 The recoil is stout, as compared to a compact 9mm or another normal-sized handgun. Compared to other backup gun sized .380’s I would call it better than average. It is more manageable with the extended 7 round magazines. A dedicated shooter could probably run 200-300 rounds through the gun without it being too fatiguing. A really adventurous type might even try to pull off a one or two day class with it, but they would have to be really adventurous.

Probably one of the best features of the P380 really has nothing to do with the gun itself at all. Being able to source spare parts can sometimes be a challenge with smaller pocket guns. In a sense, I guess the manufacturers almost consider them disposable. It doesn’t seem to be the case with the P380. Kahr supports the gun very well, making nearly every part available for purchase on their website when they are in stock.

As far as pocket guns go, I would put the Kahr P380 near the top of my list. It still isn’t as good as a compact or sub-compact 9mm handgun in terms of shooting performance, but I would take it over an LCP and a bunch of other itty-bitty blasters that are out there. It brings some features to the table usually only found on its bigger siblings, like decent sights or aftermarket sight options, a nice trigger, last round slide hold open, and good manufacturer support. If the pocket pistol size category is all you can manage, the P380 is worth more than a double-take.

My EDC is Kahr’s slightly larger (yet remarkably similar) big brother to the P380, the ‘premium’ Kahr PM9. I shot several sub/compact 9mm, plus a handful of popular .380 ACP handguns before deciding on the PM9. It’s still small enough to be a “pocket” gun for me, but is more manageable (and accurate) than ANY of the tiny .380 ACP ones I shot (including Glock’s 42), despite using the larger 9mm ammunition. Price did play a factor, as I didn’t pay Kahr’s ‘premium’ price, scoring a MA-compliant (PM9193 w/LCI + thumb safety) PM9, complete with hard case and included 3 mags, pre-owned at a local gun shop for 40% of Kahr’s MSRP. Plus, being pre-owned, it was already ‘broke in’ (as Kahr’s recommends).
If I had to buy ‘new’, I may have opted for their more price-conscious CM9. I love my Kahr handgun, but also know people who loathe them. I will say that it can be a bear to rack the slide if I get out of practice, due to the aggressive slide serrations and stiff recoil spring. The checkered stippling on the front of the grip can also feel rough if I’m not using it regularly. Overall, solid handguns that helped invent the single stack market.
Good, honest review of the Kahr P380 – thanks for the info!

Last edited 10 months ago by B K Roberts
0
Reply

I’ll stick with my Glock G27, thank you very much. The G26 and G27 were the original “pocket-rockets”.

There’s always that proviso, “ my gun”…Plenty of other owners speak of multiple failures and returns to Kahn even after the 200 round break in period.

Plus this gun is not available in a more “tactical” caliber like 9mm, .40S&W, or .357SIG. Yet another reason to go with the Glock over this pistol.

I had the karh p380. Constant failure to feed issues and you can find many similar complaints on various sites and forums. I got the karh pm9 and it has been flawless. Over 5000 rounds through it. It takes all types of ammo, not one malfunction.
The karh p380 does better with round tip ball ammo.however, most people want defense ammo in a 380.
The pm9 was designed first. If you look at how the 9mm sits in the pm9, in relationship to the feeding ramp, you can clearly see the problem with p380.
The 9 is tilted more vertically and sits higher on the feeding ramp.
The 380 is tilted more horizontally and sits lower on the feeding ramp.
This is why there are so many failure to feed issues with the karh p380.
They took the design of the pm9 and used it for the 380 without customizing the specs effectively for the 380 round.
I’m a karh fan. I wish they would take this feedback. The p380 has the potential to be a great gun.
I can’t imagine that the adjustments I mentioned would be hard to implement for a gun manufacturer like karh.
As it stands now, the p380 is terrible
Alfred-