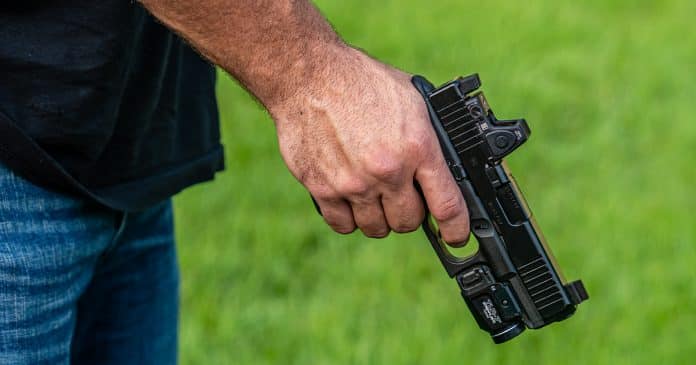 Warning shots are universally considered a very bad idea. The justice system can define them as a “miss” rather than a warning and calling them a warning is essentially admitting that the threat was not imminent otherwise there wouldn’t be time for a “warning”. And if the warning was fired into the air that bullet has to fall somewhere and the shooter would be responsible for any damage or injury it may cause.

Still, it’s easy to see why one would want to fire a warning. No normal person wants to shoot anyone so the reasoning likely goes something like, “Maybe if I fire a warning I’ll get the attacker’s attention and they’ll know I have a gun and they’ll decide to stop and maybe even run away”. However, the courts don’t look at it that way.

In this case, though, the shooter may get away with one.

Near midnight in the Bay Area, three male suspects showed up at the home of a young woman and enticed her to come out of the home on the pretext of talking to her father. Once out of the home, she was confronted by her ex-boyfriend. Her father and brother were also present.

The ex tried to get her into the car while holding a handgun. A witness told of hearing shouts of “get into the car”. A male resident heard what was happening, saw the woman in distress, and fired a round into the ground. This caused the ex to let go of the woman and the three men fled.

An officer responding to the call spotted a speeding sedan and conducted a traffic stop and then determined that he had the suspects. All three were booked on kidnapping charges.

This one smells like a family attempting to do some sort of “rescue” or “intervention” rather than a straight-up kidnapping but then again maybe it was the woman fleeing a bad family situation. Whatever it was, it seems unlikely that the courts will look at it any other way than a kidnapping.  Especially when attempting to force someone into a car when armed.

As for the man firing the warning shot, it’s important to remember that deadly force can only be used to stop an imminent deadly force threat. Kidnapping is certainly that but his action of firing the warning shows that he didn’t believe the threat against the woman was imminent. Had he fired at the kidnappers, assuming he had a clean shot, that would have shown that he subjectively believed the threat was imminent and that he no other option.

That the incident was ended with no one being injured may work in his favor. What role the family dynamic will play in all of this is anyone’s guess.