by Christian Xaypanya
in Articles
0 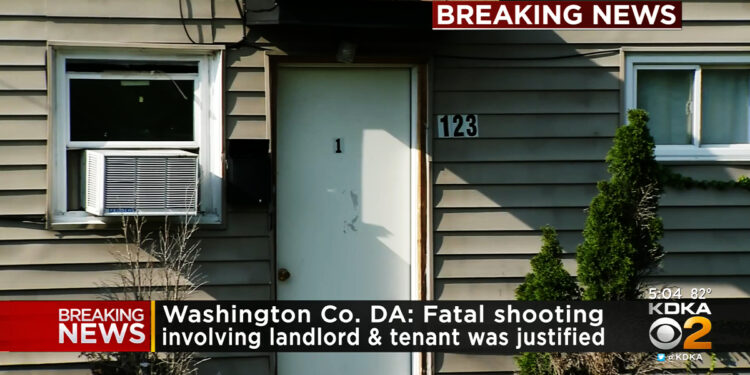 A landlord in Washington County, PA, who fatally shot his tenant will not face charges as the district attorney has determined he was justified in doing so.

According to authorities, Williams then threw the notice on the ground and followed the landlord to his vehicle while fighting and threatening him.

Williams also tried to get into the landlord’s vehicle, and the fight continued over a struggle for control over the driver’s door. The landlord, who has a valid concealed carry license, then shot Williams, saying he feared for his life.

District Attorney Jason Walsh stated that evidence showed Williams was the aggressor, proving the landlord’s gunfire was justifiable self-defense. Walsh also states that no charges will be filed as this was a justified homicide under Pennsylvania law.

The evidence here just about supports every action of justifiable self-defense. The landlord was doing his job firstly and attempted to leave the scene as it became hostile.

It is clear who the aggressor was here with the evidence present, and the landlord used his firearm in valid fear for his life.

With regards to concealed carry, the landlord also made sure or at least tried to create distance between himself and the imminent threat. It can only be imagined how much worse this situation could have gotten for him if Williams had gotten his hands on him.

It is important to note that this was a justifiable homicide, according to the district attorney under Pennsylvania law. This does not apply to every other state, so it must be remembered to stay updated with your state laws as much as possible to avoid charges for seemingly defending yourself.

Emergency Preparedness and Planning For Self-Defense

Emergency Preparedness and Planning For Self-Defense