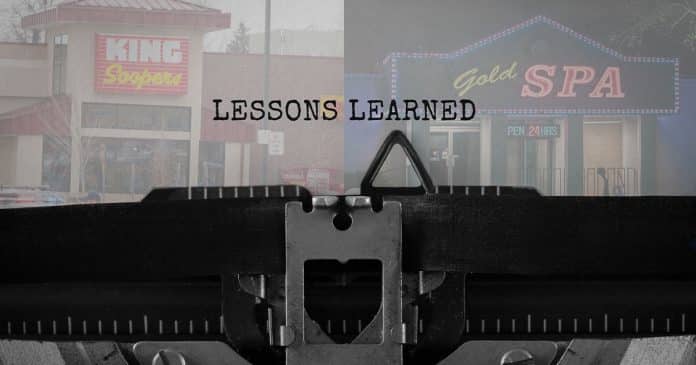 Well, if you thought that a change in political administration would mean that “hate” would vanish from our society and everyone would now be singing kumbaya, you were evidently wrong. This past week we witnessed two mass murder events, both of which may have been motivated by “hate,” for whatever that is worth. The problem I have with the entire hate crime discussion is that last time I checked, homicide is homicide regardless of the victim or perpetrator’s ethnicity or ideology. I consider the murder of another human being to be a very hateful act regardless of the supposed reasons for that hatred.

Rather than focus on such unproductive nonsense (we can leave that to the media), concealed carriers should focus on the real lessons to come from these horrific and tragic events. Concerning ourselves with what social factors may or may not breed hate in unstable individuals is a fool’s errand. Whether motivated by bigotry towards other ethnicities or religions, hate-filled people have been present since the inception of mankind. The notion that society as a whole can somehow change so as not to trigger this small minority of violent actors is asinine. Violent predators are ever-present, and sometimes these true monsters emerge.

It is exceedingly common now for a mass attack to follow within weeks, or even days, of another, and we have seen this over and over again. Sickos inspire other sickos. The most influential of mass killings have remained on the minds of all aspiring mass murderers out there. When a new incident happens, it appears to be all that is needed to push the next lunatic over the edge to do what he has long considered doing.

I would propose that it is not unreasonable to run on a heightened sense of alert, awareness, and preparedness in the wake of any one of these mass killings that unfolds as we are more likely to see another play out within a short time frame somewhere else in the nation. Don’t go to soft target areas (typically places where firearms are prohibited or places inhabited by a population that is all but guaranteed to be unarmed). Keep your head on a swivel.

You Are on Your Own

These incidents happen too fast for there to be any hope of first responders making it in time to save lives. If you find yourself at ground zero, you are the first responder. The incident that transpired in the beauty salons illustrates this: have you considered what you would do if you were sitting in such an establishment and a lunatic walked in and immediately started shooting people? Killing half a dozen people takes, literally, just a few seconds. What good will your 911 call accomplish? A solid draw stroke to a first-round hit is what is needed. That is the remedy; that is the cure.

The second incident to transpire this past week saw ten people killed in a grocery store, and the first police to make entry into the store took over half-an-hour to do so. If you want to condemn the police for their prolonged response time in this circumstance, I remind you, the first heroic officer that made entry died doing so. Entering a structure with an active killer is no small matter and is exceedingly dangerous. Many police officers have been killed or wounded throughout the years responding to such incidents.

Would you want to find yourself cowering in a hiding place, hoping not to be found by the monster while you wait that long for someone else to save you? The Pulse Night Club mass murder from several years ago witnessed people hiding for hours while first responders negotiated with the killer. When law enforcement settles these incidents, they are often long and drawn-out events. When an armed citizen who is present settles such incidents, it is often done so almost immediately.

The best way to negotiate with a mass murderer who in the process of hurting people is to send him multiple cease-and-desist orders, moving at 1200 feet-per-second.

Are Your Skills and Gear Up to the Task?

The second killer this past week was wearing armor and had a rifle, at least that is what I have heard, according to reports. Can you make that headshot at 25 yards? Can you do it quickly? Speed is a thing when somebody will be shooting back with a rifle. Can you do that with your 380 pocket pistol that is so easy to carry or your J-Frame revolver?

Now is the time to be carrying a real fighting gun. This is the golden age of carry guns, and some of the very small 9mm pistols that have a capacity of 10+ rounds are very tiny yet quite shootable. If you can swing it, why not go bigger yet and carry a true double-stack compact or full-size pistol? While less convenient, consider what you would want to be holding if you faced such a circumstance.

So, that is my thinking on the matter. Carry your handgun, carry it all the time, and carry a handgun that you can really fight with. Be consistently practicing so you can shoot with surgical precision quickly, as that is what may be needed if a monster shows up. Carry emergency medical supplies, and have that skill set as well. When such a horror show appears in your life, you are the only one that you and your loved ones can count on. Hopefully, if you find yourself in such a terrible situation, everyone will be reading a very different headline.

The officer in Boulder may have had armor, but most departments issue soft armor that is usually only rated to handle pistol rounds. .556 or .223 will blow right thru most of that, so he knowingly died trying to save innocents.
Even if the assailant is armored, shoot anyway – the pain will be distracting, if nor disabling, then when he’s down, fire until the threat is neutralized.

It’s totally amazing at how these active shooter episodes always pop up at just the right time when Democrats need verification for their ignorant gun grab rethoric …very suspicious that the FBI knew of this person all along but did nothing to apprehend him before this shooting…just as though they wanted it to happen…gun grab with all its false narriatives.