We Live In A Different World, And It’s Time For The Casual Carrier To Commit 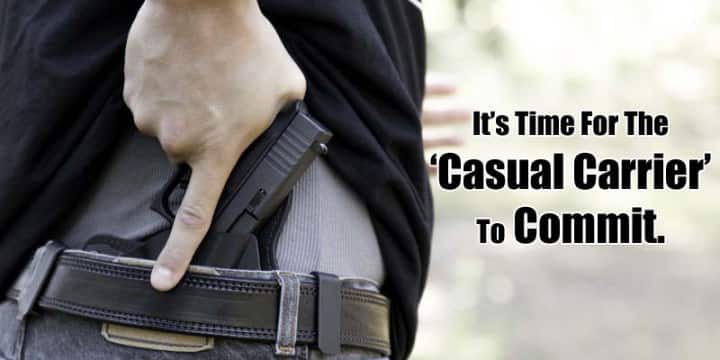 I’m breaking my silence on the ‘casual carrier’.

The casual carrier is a person who carries their firearm at a time when they feel they’d need it most. Say they’re going to a bad part of town or they’re going to the bank with a large cash deposit. These circumstances make them strap on their firearm so that they’re prepared. But what about the other hours of the day in between?

Now, more than ever, I advocate for the casual carrier to commit to carrying their firearm.

The events that happened in San Bernardino on Wednesday that left 14 dead and 21 injured can happen anywhere in the country. This attack taught us two very important things, the first of which is that the bad people are our neighbors. The couple behind the attack seemed to have lived a double life that not even their families were aware of. There was no indication that anything was out of place, and at least one was able to legally purchase firearms by passing the required background checks.

The second important thing to take away from this is the real potential that terror cells are already among us in the United States. While the feds are currently probing any possible links and will not yet officially tie terrorism to what occurred, the LA Times reports that “[The Suspect] was in contact with a small number of suspected extremists. There are also indications that the 28-year-old gunman communicated with at least one person who is currently being monitored as a potential terror suspect,…”

The Christian Science Monitor has also reported on these claims, saying that “[The Suspect] had been in contact with known Islamic extremists on social media.”

It’s a new age with new threats, and these threats can be anywhere.

I never promote or push fear as the agenda. It’s not right or healthy to live in constant fear. What I do promote is preparedness, and for most of you reading this article, part of your preparedness –to some extent– is having a firearm for self-defense.

For the causal carrier, consider this: If you knew when violence was going to come your way, you wouldn’t need to carry a firearm in the first place. You’d simply avoid the violence based on your abilities to see into the future. There’s a hint of sarcasm in there, but it’s a valid point.

I plead with you, right here and now; Practice with your firearm and carry that firearm with you wherever you go. This includes being inside your own home. The whole idea behind this is not to fend off terrorists, although that is the main point for this article. The much more broad idea is to be prepared for the thousands of self-defense incidents that happen in this country on a daily basis.

Right now, as that extra push for the casual carrier, you have even more of an obligation to commit to concealed carry in the face of a very real threat that could live in your community.

For the person coming into concealed carry, embrace this new commitment that you’ve taken on and be as prepared as you can be.