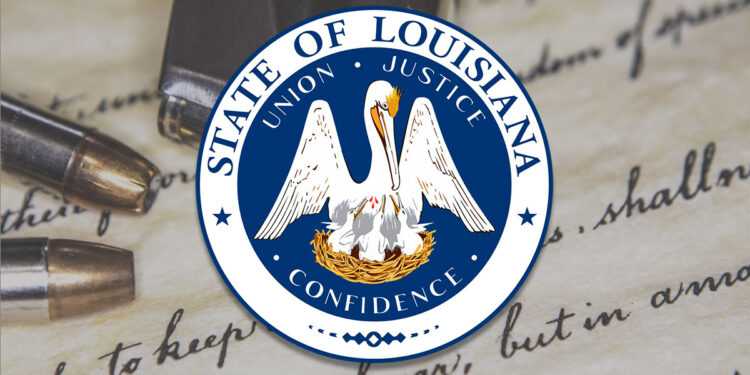 I am happy to report that Constitutional Carry bill HB37 and Louisiana Firearm Protection Act HB43 both passed out of their respective Senate committees. At this point, the next step for both of these bills should be a vote by the entire Senate in order to send them to the Governor’s desk, but instead, HB37 and HB43 are being unnecessarily delayed.

Both HB47 and HB43 have been removed from the Senate calendar, with HB37 being sent to the Senate Revenue and Fiscal Affairs Committee and HB43 to the Legislative Bureau.

The reason that these delays are significant is that currently the major obstacle for these bills becoming law this session is timing.

Both of these bills passed out the House and out of their respective committees with overwhelming support, and it is almost certain that both of these bills will be passed by the Senate and sent to Governor Edwards.

Last session the Governor vetoed Constitutional Carry and has stated he would veto it again this year. If the legislature is going to have a chance to override the Governor’s veto before the session ends (which will be their best opportunity for doing so), they will need to pass HB37 and HB43 and have it on the Governor’s desk before Saturday, May 28th.

Under the Louisiana Constitution the Governor has 10 days to either sign or veto a bill while the legislature is in session. If the Governor receives a bill with less than 10 days remaining in the session, he can wait until the session ends and then veto it. Once the session ends, the only way to override the Governor’s veto would be in a veto session. (The current session ends June 6th, which means that HB37 and HB43 must make it the Governor no later than Saturday, May 28th.)

Veto sessions are extremely rare (there have only been two since 1975) and with the lack of support the House and Senate leadership have shown for Constitutional Carry and the Louisiana Firearm Protection Act, it is unlikely that Speaker Schexnayder or President Cortez would push for a veto session.

This lack of support by the leadership is further highlighted by this unnecessary delay in bringing HB37 and HB43 for a vote by the entire Senate. If HB37 and HB43 were a priority for Speaker Cortez, he would bring both of them up for a vote as soon as possible!

That is why I need you to take action as soon as you can to urge your State Senator to VOTE YES on HB37 and HB43 and also to let them know just how important it is that these votes take place as soon as possible!

Once you have emailed your State Senator, PLEASE CALL Senate President Cortez ((225) 342-9990) and ask that he bring HB37 and HB43 for a vote by the Senate as soon as possible to make sure these bills reach the Governor’s desk before Saturday, May 28th.

P.S. Please distribute this alert to your pro-gun family and friends and urge them to take action. To renew your GOA membership or to join for the first time, please click here.

I have written State Senators and Congress before. All that happens is that they send you back a form letter stating their current opinion of the specific matter and clearly will not budge. It’s a waste of time.