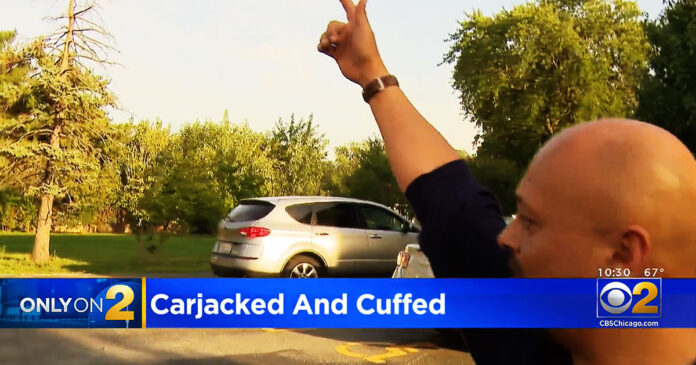 About a month ago, Naser Zaghlol was making a delivery for Door Dash when two people jumped into his Nissan. As they were about to drive off, he swung open the passenger door. Fortunately for Naser, the criminal missed the shot intended for him.

“They jumped in my car. I ran to them. I open the door before they put in drive,” Zaghlol said. “The other guy next to him shot at me. Luckily, they didn’t kill me.”

The Police found his damaged Nissan days later, but the thieves had his key fob. Worse yet, they knew where he lived. Personally, if it were my vehicle, I would have installed new locks upon return.

A couple of days ago, a car was stolen from a Southwest suburb of Chicago Tinley Park. Guess what, it was Naser’s.

Tuesday night, Naser’s son called him and said, ‘What’s going on, Dad?’ as the family’s vehicle was flying away in front of their apartment. Naser ran outside with his registered gun and fired three shots into the air.

“I don’t think about my money, my car, nothing. I was just worried about my kids between criminals.” Naser said.

Soon after, the Police arrived, and instead of arresting the carjackers who were long gone, they arrested Naser. He was charged with reckless discharge of a weapon and spent 24 hours in jail. In Illinois, reckless discharge is a Class 4 felony, and a conviction could land you in prison for 1 to 3 years.

When he was released from jail, a reporter from CBS spoke with him. A firestorm of comments on social media began. Some people thought the wrong person was arrested. Others concentrated on the fact he fired shots into the air.

One person wrote, “the victim gets arrested, and the thieves are out running the streets!” “I didn’t think they needed to arrest him after all, he’s the victim here!!”

He may be the victim, but that does not mean he can break the law. And in Illinois, you cannot use deadly force in defense of property. He said he was worried about his “kids between the criminals,” and if he was in fear for their lives, shooting at the criminal might be justified, but warning shots are a terrible idea.

Warning Shots in Self Defense: Considerations and Consequences

I read the comment, “If you have to pull, be sure your life is in danger and unload on those carjackers, no warning shots.”

When you pull your gun, you better intend to use it. In Illinois, you must believe “deadly force is necessary to prevent imminent death or serious bodily harm to yourself or another person.” The bottom line is you are going to have to justify your actions.

Kevin Coyne, Founder of Safe Suburbs USA, said, “Incidents, such as this recent firearm discharge in Tinley Park, are going to happen with increased frequency as repeat violent offenders try to prey on people that turn out to be armed.”

His comment got me thinking as violence across the country rises, will people be more inclined to make a wrong decision? Think of it this way. Will “Am I next because it happened to so many others?” be in the back of your mind? A couple of days ago, there was an unbelievable shoot-out between two cars that sounded like a scene from the game Grand Theft Auto, and it went on for blocks. If these news stories are constantly reported, will that impact your decision when you only have a split second to decide what to do? The law is the law, and just because you only had a split second, that does not make it a justified shooting. As an instructor, I stress the importance of mindset. Mindset is preparing yourself mentally as well as practicing your physical skills. People often get so hung up on physical skills that the mindset gets left behind.

I am sure his adrenaline was running high, and he was infuriated. Who wouldn’t be, especially since it also happened a few weeks ago? There are implications for your actions. They have serious consequences that you may pay for long after the confrontation. Do not forget how important mindset is because Naser will learn so many lessons the hard way.

Oh, and the criminals are STILL on the loose to try again.