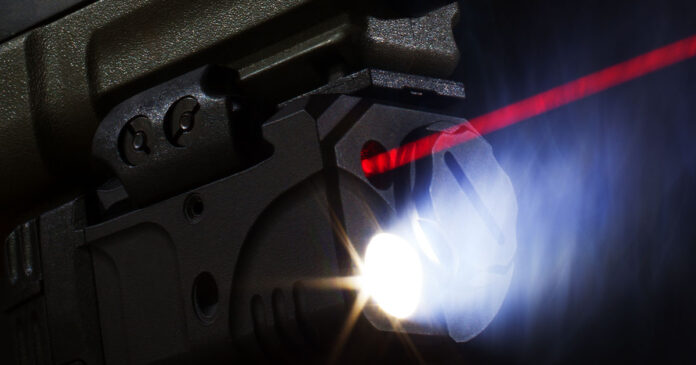 26-year-old Akele Spencer was arrested after having pointed his handgun-mounted laser at a plane as well as at a Northwestern University police officer.

Initially, a pilot of United Airlines reported to the FAA around 2 A.M. that a laser was shining into his cockpit over Clark Street Beach, according to Evanston Police Cmdr. Ryan Glew.

Evanston and Northwestern University Police Department both responded, and upon arrival, Spencer was pointing the laser mounted on his loaded handgun at a female NUPD officer.

Spencer, who has a concealed carry permit, was arrested and charged with felony aggravated unlawful use of a weapon for having it on a beach containing signs prohibiting firearms. Other charges include misdemeanor disorderly conduct for the use of the laser pointer.

You would think or at the very least hope someone with a concealed carry permit would know better than to commit an idiotic act like this. We can hand this person the irresponsible gun owner of the day award.

These kinds of actions only put a bad rap on the rest of the responsible gun owners doing their part in making sure they can protect themselves and any other innocent lives.

This irresponsible gun owner should be fortunate nothing worse happened to him as he pointed, let alone the laser, but the gun as well at a police officer.

As responsible gun owners, we cannot take the fundamentals of firearm safety lightly.

Here is some minimum safe distance data regarding even “safe” LASER pointers and LASER sights. Even a “low power” LASER pointer or sight can cause permanent damage to a person’s vision that cannot be fixed by glasses, medicines or surgery. Even a beam reflected off a bright or especially a shiny surface can cause damage. Note that the higher the number on the label the more dangerous the LASER.

However, keep in mind that labeling on LASERs from China has been found to be imprecise and a “3A” or “iiia” device (up to 5mW) may actually be as powerful as a 3B device (up to 500mW) and poses a MUCH higher risk of eye damage even at distances farther than 52 feet.

Also keep in mind that some non-red LASERs (again, have been found in devices from China) actually emit beams in TWO wavelengths; the beam you can see (e.g. green, blue, etc) and one you can’t in Infra-Red (IR). This happens when to save money the device is built without an IR filter or the filter is damaged or not installed properly. With these types of LASERs, wearing safety glasses designed for the visible beam wavelength may not protect a person from the invisible IR beam.

What is there to say here. This idiot is very fortunate to be alive. Point something that looks like a gun at police and not get shot speaks to the restraint police officers normally have today. This doesn’t fit the narrative so the 98% of the times the cop doesn’t pull the trigger isn’t normally reported.