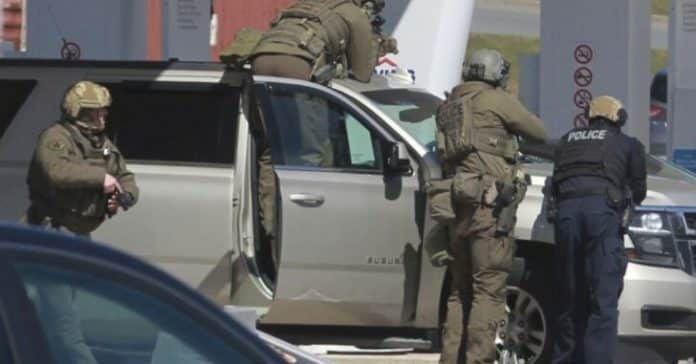 Things got real crazy late Saturday night about 60 miles north of Halifax, Nova Scotia when a man impersonating a police officer in uniform drove around the rural town of Portapique and shot and killed 16 including one police officer. Several of the victims were found in and out of one single home.

Police said that most of the victims did not know the shooter implying that some may have. Any possible motive for the attacks is unknown at this time.

Police attempted to arrest the shooter at a gas station near Halifax but he was killed in an exchange of gunfire with police. It is not known how the shooter obtained his weapon(s) or even exactly what he used.

Given the level of effort it takes to legally obtain a handgun or any semi-auto in Canada, let me speculate that he either managed to fool everyone to pass all the qualifications and checks or he simply obtained it illegally. Also given that he obtained a police uniform (or at least something close enough to trick his victims), this must have been something that he was planning for some time.

It’s almost like gun control laws can’t stop crazy or something. Think about it. Impersonating a police officer is illegal. Murder is certainly illegal. If someone has already decided to do those two what’s the big deal about getting a weapon to do it.

Two other quotes are interesting. A resident in the area said:

“ It’s nerve-wracking because you don’t know if somebody has lost their mind and is going to beat in your front door. VIA APNEWS

I would imagine so especially when you are not allowed to own the best tool available to defend yourself. Could some of the victims have survived if they had been allowed to own a gun for self-defense? We’ll never know.

Another quote from a lawmaker in the area said:

This is just an absolutely wonderful, peaceful quiet community and the idea that this could happen in our community is unbelievable.

The idea that your town is immune from this sort of thing because it’s such a quiet place can be dangerous. People let their guard down and fail to prepare to protect themselves from evil because they don’t believe it can happen where they live.