What would you do if you were the victim of a beating like this? Better yet, what would you do if you were a bystander? CWB Chicago once again highlighted the out-of-control violence in Chicago. This type of incident has been caught on video multiple times over the past year, so it is not like it is an isolated case. This is all the footage I can find, and we do not know what led to the point where this video starts. Regardless, the victim gets beat up pretty badly, and there is no doubt he was not a threat to his attackers. The video starts with the victim stepping backward and attempting to get away. Be aware that the language in the video is not for kids, and it is violent.

So, what's up with the viral video that shows a man being beaten, kicked, and slammed into a CTA track support beam in the Loop?https://t.co/2bYQOYuW5k

The video starts with the victim in the yellow jacket backing up as the guy in the gray shirt moves toward him with what looks like a sign. The attacker throws the sign at the victim and knocks him down. Once on the ground, the attacker continually kicks and hits the man. The second attacker, wearing the black jacket, pulls the victim off the street and onto the sidewalk by his leg. The attacker in the gray shirt does not stop and kicks the victim so hard that he spins him around on the sidewalk. As if that were not enough, the attacker picks the victim up by the belt loop and the back of his collar, then rams his head into the beam that supports the train tracks above. Keep in mind that this is a busy street right in downtown Chicago, with most likely plenty of people around.

So back to my original questions. What would you do if you were the victim of a beating like this?

I am a concealed carry instructor in Illinois, and we discuss the disparity of force in every class. From what I am seeing, this would probably qualify. The attackers were not armed with what you would typically think of as a deadly weapon, like a knife or a gun. Masood Ayoub is a well-known expert in the use of force and has said, “At what point does someone’s fist become that deadly weapon?” Would he have been justified in using his gun in self-defense?

What would you do if you were a bystander?

How about if you were a bystander or with a group of bystanders? In this case, at least three decent-sized adult men just stood there and watched. They appeared to do nothing and didn’t even pick up a phone to call 911. Did they think this was a WWE match for their viewing pleasure? It’s possible the situation could have escalated if someone intervened, but for everybody to stand by and do nothing kind of makes you wonder. The two attackers could have been armed, but the bystanders just stood by and watched. Had someone stepped in and drawn a weapon, who knows where this would have ended up? These are all factors to consider in what you would do. 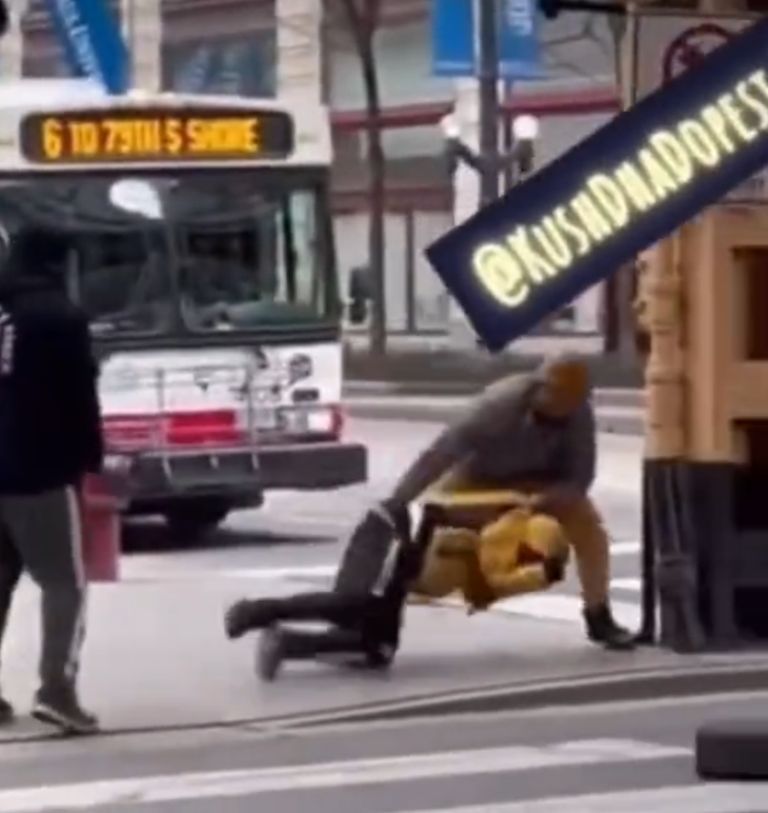 What if you went to help, but other people standing there did not step up and take action with you?

Would your response have been different if it was a friend or a loved one?

If it were someone you did not know, you probably would not be as likely to get involved, but I think most of us would be more proactive if it was a friend or loved one.

What if you were alone and there was no one around to help you?

To further open the discussion, let’s assume there were no other bystanders that could have assisted you if you decided to go to the man’s aid. Had there been no video and it went before a jury, the prosecuting attorney could again easily say it was two against two.

What would you do if you were a bystander?

Maybe someone could have stepped up, tried to rally the troops, and helped the guy out. There were probably more than enough people there to have stopped the attack. Then again, weapons could have come out, and the situation could have worsened.

Unfortunately, this shows an example where you may be left alone to defend yourself even if there is a large group of people. All the questions above are things to consider before you find yourself in the middle of a melee.

I am disappointed that everyone stood around and did nothing, especially considering the number of bystanders. This was about 10 am on a Saturday morning in a typically busy area with lots of people. As far as the lady taking the video, the evidence is good, but maybe next time, think about calling 911 and not just yelling obscenities. She felt safe enough to stand there and film it all, so perhaps she could have yelled at them to “stop.”

There is one more plot twist in the story. CWB reported that the man getting beat up might have been trying to carjack a vehicle. The thing is, the two guys dishing out the beating left the scene on foot and not in a vehicle, so someone will need to explain that one. We may never know the entire story, but it is an excellent example of why you should think about when you can use deadly force to protect your own life or someone else’s life.