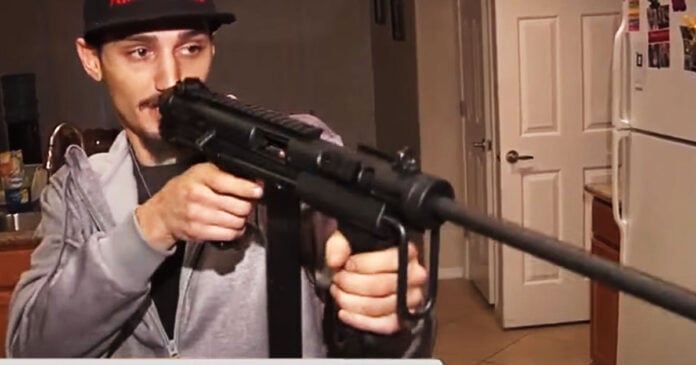 This home invasion shows everything you should not do if someone breaks in. The resident’s name is Joey Imereti, and he gave an interview to KTNV Las Vegas. In the video, Imerti explains to a reporter what happened the night of the break-in. Last month the newscast went viral on Facebook with almost 3 million views. I thought the video might have been a hoax because it was so far out there I didn’t see how it could happen. I finally found out it was from 2016, and it barely made the news.

Imerti’s first mistake was giving an interview without an attorney. He is waving his gun at the cameraman and reporter for the entire time she is asking questions. Why they even allowed him to have a gun around is beyond me!

Imerti tells the reporter that as a man broke into his home, he yelled, “Freeze, don’t move,” and fired a warning shot. If he had time to do both, he must not have been in “imminent danger” and would have trouble proving he was in fear for his life. With that missing, the circumstances did not meet the criteria to use deadly force or discharge his weapon.

A good investigator would question another statement he made. “I didn’t shoot to kill” “That’s why I aimed down, but if my gun didn’t jam, I definitely would have hit him.” How could he have shot the intruder if he was pointing the gun down? If it was a warning shot, as he claims, why would he say, “I definitely would have hit him,” suggesting he would have shot the guy? He contradicts himself, and those comments can cast suspicion on if he made the right decision. These types of statements are why you should have your attorney present whenever you talk to someone about what happened when you defend yourself.

This guy also broke many firearm safety rules, and it was so bad you might consider it reckless endangerment.

During the interview, you can see the gun with a loaded magazine and the chamber back. If I were part of the news crew, I would have had a heart attack, but I think most people would not have let it go that far. The news crew is lucky to be alive after having a loaded gun pointed at them by a man with a total disregard for safety.

Towards the end of the interview, the reporter asks, “Are you still anxious tonight?” and Imerti replies, “I actually went out and got another gun today.” Before this individual gets another gun, he needs some training, so he doesn’t end up hurting himself or someone else. Someone like this makes responsible gun owners look bad and does nothing but give people a reason to push for more gun laws.

What a boob. I don’t believe a word of his story. I’d bet he knows who he was shooting at and what they were after. His choice of a weapon reflects his very little knowledge of firearms and how to use it effectively. Trying to use a range toy for serious self defense shows very poor judgment. If you’re not willing to kill who your shooting at, you shouldn’t be shooting at them to begin with. I think he fired a couple of rounds to scare the intruder off and claimed his gun “Jamed”. It would be interesting to see what the police investigation turns up.

So the writer is a “Concealed Carry and Firearms Instructor” but doesn’t know the difference between a bolt and a chamber?!? — And he has the nerve to talk about anyone needing training!