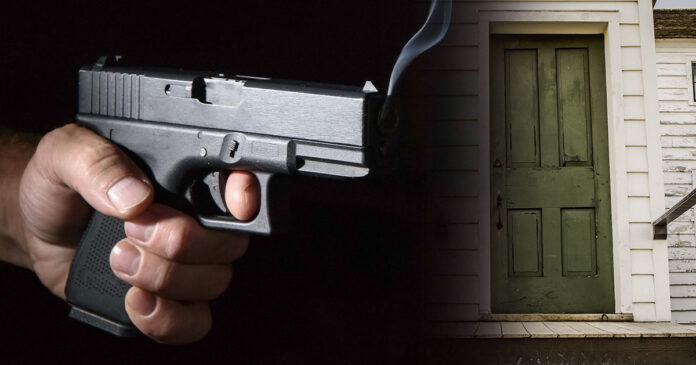 We cover a lot of stories here where homeowners go outside to inspect a noise or confront a suspect. This is something we never recommend. That is NOT what this homeowner did.

An elderly California man came home this past Tuesday and noticed one of his firearms and some tools were missing. This was obviously concerning and put the man on edge. Later that evening, around 9 PM, the homeowner noticed headlights in his driveway.

Being that he was already robbed earlier in the day, he armed himself with a handgun, and instead of confronting the suspects outside, he stayed inside. If the suspects left, great. If they decided to break in, he was prepared. And that’s exactly what happened.

The two suspects broke into the house, and the homeowner shot both of them. When the police arrived, they found a male suspect dead and a wounded female suspect who was taken to the hospital.

One thing I have to say is to secure your firearms. Get a safe big enough to hold all the firearms you own. When I am home, all of my firearms are locked up other than my concealed carry gun. If I’m taking guns out to review or use in photos or videos, they go right back to the safe when I’m done. Luckily for this homeowner, the burglars only stole one of his firearms and leaving him with at least one more to defend himself with.

If the two intruders that were shot were the same ones that robbed him earlier in the day, I bet they’re thinking that it was a pretty dumb decision to go back into a house that you knew the homeowner could still be armed. Well, at least one of them might be. The other one? Not so much.

He should have called 911 before thy broke in, if they broke in after he called at least he made an effort to notify authorities instead of what’s going to appear to be an ambush. Most likely no time, and loss or suspension of carry permit, Just going off prior knowledge.

This story is missing some important context and details.

An intruder breaking into or entering your house unlawfully is not reason enough by itself to justify shooting them.

The old man must establish that he felt his life was in danger, of being killed or seriously harmed.

Absent that, he would have to know it was the same person who broke in earlier and had one of his firearms, to which he could reasonably say he came back to use it on him.

Not unless he knew for sure of that fact or if they threatened his life or well being, can you just shoot someone because they entered your house without permission.