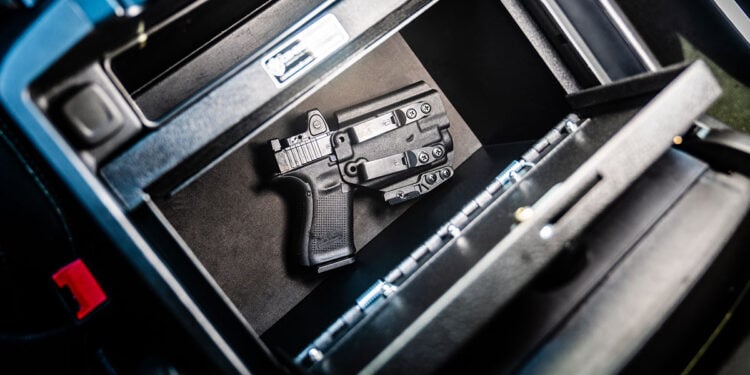 The statistics are clear, firearm theft from unoccupied vehicles is an ever-increasing problem. Realistically, this comes as little surprise as the number of people carrying guns has increased by order of magnitude over the past several years and these many gun owners often leave guns in their cars. Criminals know this. Thus, guns are a primary target of theft from vehicles.

The best advice for avoiding having your gun stolen from your car is, of course, to not leave guns in your car. While this is sound advice, it is simply not possible for everyone all the time. One should strive to minimize how often they leave a gun in the vehicle, and certainly don’t leave a gun permanently in the car so that it is subject to theft, even from your own driveway. However, many of us must enter prohibited areas occasionally, and to do so, we may well be forced to take the gun off and leave it in the vehicle.

A gun left in a car is susceptible to theft, but there are measures we can take to make it much less likely. First of all, minimize how often you do this. There is, quite frankly, little reason to leave a gun always in your car when you are at home. Cars get broken into even when parked right in front of the home. Why leave a gun in the car overnight or during the day when you are at home? Avoiding theft of the firearm is best accomplished by not leaving the gun in the vehicle any time we can avoid doing so.

However, if we simply have no choice and must occasionally leave our carry gun in the car, how can we do so to the safest possible extent?

The first consideration when it comes to mitigating the risk of theft is not to draw attention to your vehicle. As tempted as you may be to advertise to the world that you love Glock pistols, putting that Glock sticker on your bumper lets criminals know that there is a heightened chance of scoring a gun should they break into your car.

Further, consider any kind of adornment that advertises your firearms lifestyle. This may be things other than specific gun stickers. A “come and take it” flag on your antenna is a pretty clear indication of where you stand on guns, and you tip your hat to the possibility of there being a gun in your car. Likewise, hunting signage, NRA stickers, and any number of indicators can draw the attention of criminals. Avoid any such advertisement that suggests that there is a higher-than-usual possibility of there being a gun in the car.

While a determined and prepared thief can ultimately get a gun out of a car no matter how secure we make it, the much more likely smash-and-grab thief can be deterred from walking away with the gun if we make it difficult to obtain. In most circumstances, time is of the essence for a thief who breaks into a car. Suppose the vehicle is parked in a parking garage, in your driveway, or in a parking lot that has passers-by present. In that case, time is a factor, and most criminals who break into the vehicle want to be able to grab what is available for the taking and quickly flee the scene. This more common criminal element can be thwarted, perhaps not from breaking into the car but from getting the gun if it is secured properly.

The best way to retain the gun in the event of a smash-and-grab break-in is to have it secured in a safe of some kind that is fastened to the vehicle’s frame in some capacity. For a pistol, a workable solution will be a small hand safe that can be placed under the seat or somewhere else that is not visible. We certainly do not want any sort of gun safe in view from the outside observable through the windows. Placed under a seat or in the trunk, these types of safes can be attached to the seat frame or other point of contact via a Kensington cable. Granted, the cable can be cut with a set of bolt cutters, but we come back to the point that most smash-and-grab opportunists are not carrying such tools.

Better than a hand safe that can fasten via a cable is a safe that can actually be anchored to the vehicle’s frame with bolts. Such a safe can’t simply be cut free with a bolt cutter but would require intense prying with a crowbar. A pry bar would be needed to either get the safe itself off the bolts or to get into the safe. A ruggedly designed hand safe, or a rugged long gun safe, placed in the trunk or under a seat that is actually fastened to the vehicle’s frame will thwart most attempts where the criminal is pressed for time. Again, it is ultimately possible for a thief to obtain the gun inside the safe or walk away with the safe. However, since time is usually a critical factor, most circumstances will not permit the thief the time necessary to get such a safe free from the frame.

Beyond avoiding nefarious theft, another reason to keep a firearm secured in a dedicated safe of some sort is to avoid unauthorized access by children or other people who are legally in your vehicle. It becomes easy to forget that a gun is in a particular compartment of the vehicle, especially if you are an individual that most often carries the gun but might need to secure it in the vehicle when entering a restricted area. In the event that you leave children unattended in the car and forget that you have a handgun sitting in the glove box or center console, you could experience a life-altering event. Not good. Making it a habit to only place a firearm in a designated car safe when you must leave the gun in the vehicle is a sound practice that will avoid a tragedy.

In closing, I urge you to avoid leaving guns in your vehicle for prolonged periods of time if not necessary. However, if you must do so at certain times, secure it against theft and unauthorized access to the best of your ability.

Buffalo Shooting Witness: “More people should be armed. It’s not the gun, it’s the person with the gun.”

Buffalo Shooting Witness: "More people should be armed. It's not the gun, it's the person with the gun."