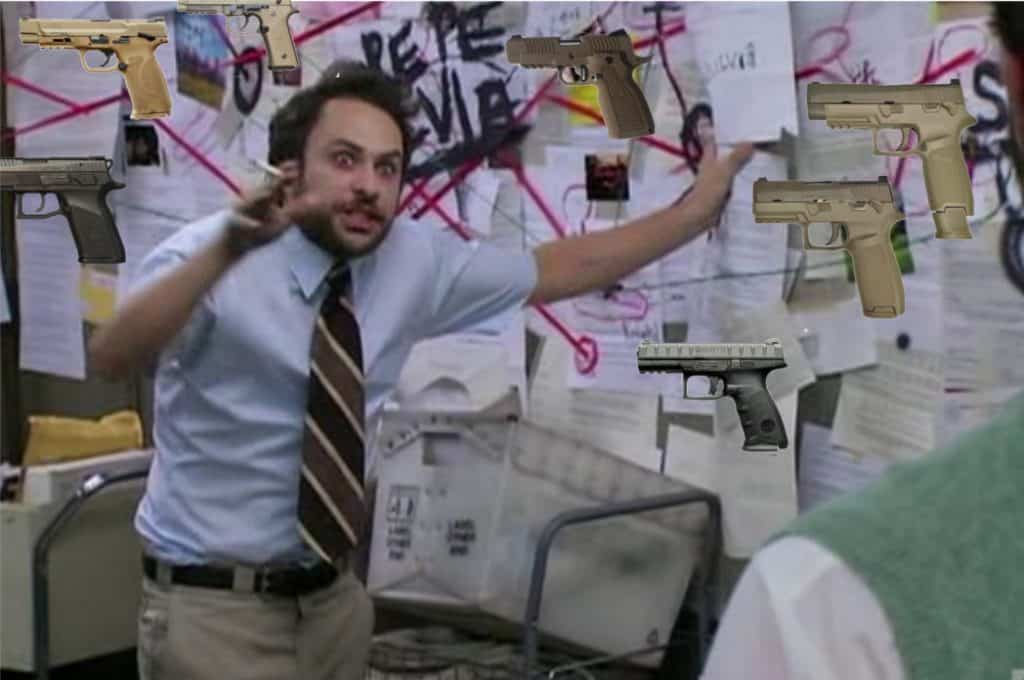 This past October, I could tell gun sales were down, and the Modular Handgun System contract was finalized. How could I, a lowly consumer, determine this bit of data without ever cracking a newspaper? The gun stores were littered with nearly identical looking, predominantly striker-fired pistols in a wide range of Flat Dark Earth tones.

And they were all “on sale.”

That’s what I love. I love it when gun stores hold big sales that aren’t actually sales. As a consumer, it’s almost impossible for me to know the value of a gun on the market. If I waited about a month and a half, I could have made it to the Christmas Season and see what the actual sales price should be.

But back in October, when I saw the Beretta APX, FN 509, CZ P-07 all sitting next to each other in the ‘Used’ section, my mind began to reel.

And I know I’m going to catch soo much internet hate for this but — they all mostly look and feel the same. And it shouldn’t be a surprise. They all competed for the U.S. Army’s MHS contract. They all had stringent requirements to meet. The U.S. Army has a lot of money. They push out hundreds of millions of dollars, and I spend probably – at most – $700 a year on new pistol purchases.

In a battle between consumers and the Army, the Army wins. And if the Army wants an ugly looking striker fire pistol, by crikey, they’ll get one.

That’s essentially my takeaway from the whole U.S. Army MHS contract for the XM17. It was a Battle Royale to see who can make the ugliest gun that does everything the Army wants it to do.

One by one, each gun fell away from the MHS contract until the U.S. Army was left with three guns. Which ones? I don’t know. But the Army went with Sig’s P320. The rest is history.

Well, until all the competing gun companies had designs for the next Army handgun and nowhere to go.

And all the price tags are pretty much the same as the Sig Sauer P320.

Now, that’s not to say that each doesn’t have awesome characteristics and, in no way shape or form, am I saying the Sig P320 is superior to these guns. The U.S. Army chooses based upon what the U.S. Army thinks is important. I choose a gun based on what I think is important.

I’ve personally fired the CZ P-07, Glock 19 Gen 5, Sig P320, and the Beretta APX. I actually think the Beretta APX is an excellent pistol. And it’s probably more than a bit cruel to say they all look and feel the same. There are notable differences. However, I’m astounded by how similar each pistol looks to the next. The exception being the Sphinx SDP — which I’ve only seen one in a store, and it certainly looked unique.

If you’ve ever glanced or held a Steyr M1A1, you’ve likely remarked that it feels different. The sights are different. The grip is dynamically different from almost any pistol I’ve ever used. Steyr has a unique striker fire pistol. As a consumer, I appreciate that.

There’s nothing that magically stands out between one MHS candidate gun and the other.

The Army has taken the joy out of striker fire pistols.

As it turns out, I ended up purchasing an FNX-9 precisely because I missed the SA/DA feel and unique look of, in this case, FN. I got it used but the pistol shows no significant signs of wear, and since taking it to the range, I have yet to run into a hiccup with it.

Ironically, I think Sig’s P320 is probably the most innovative of the lot of MHS pistols. I don’t think that because they won the contract. I think that because I like how I can transform the pistol into pretty much any caliber or any grip configuration. I feel that’s where the Beretta Storm wanted to go and never quite got there. It’s where pistol manufacturers should have gone earlier and didn’t.

Striker fire pistols should be utility pistols. They should be configurable and have pieces you can swap out as the operator. It makes sense. An SA/DA classic pistol — like a CZ-75 or P226 — is a whole organism. It must be appreciated on its own. That’s just my personal philosophy as a consumer.

Needless to say, I really hope after this year’s SHOT Show that the gun manufacturers have something uniquely new to offer the market. Sig pretty much won the modularity award. If I want a modular pistol that I can adapt to nearly any situation, I’ll get a P320.

Fun article. I have to say the Sphinx SDP is a very cool pistol, and I would love the opportunity to shoot one.

One thing I never seem to hear when someone mentions they want to buy a pistol, is whether or not it points naturally for you. That should be the very first thing to consider, especially if you plan to use it as a carry gun. Chances are, you’ve already decided the caliber, capacity and relative size of the pistol, before you have even stepped into a gun shop. You probably have even decided upon a certain make and model. All that means absolutely nothing, when you finally get to pick it up and see how it feels in your hand, and it does not point for you.
Some guns point for me, and some don’t. Unless your hands will magically morph to fit any pistol you pick up, you have the same problem as I. Any pistol I pick up from the gun shop’s counter, has to be able to do one thing, before I even try the trigger – point. When I pick that gun up, I am standing in my shooting stance. When I bring the gun up, that front sight has to be visible in the middle of the notch on the rear sights. If it doesn’t point for me there, it won’t point for me at the shooting range.
I am always seeing posts of those who worship at the altar of Glock. No pre-gen 4 Glock will fit my hand. When I pick one up, the front sight is obscured because it is sitting directly behind the left post of the rear sight. That means I have to shift the pistol in my hand to line up the sights. Yes, older Glocks are quite wonderful if they fit your hand, but they do not fit mine. A Walther PPS M2 will point for me, as will a Sig 320 with the right grip. I can say the same for the S&W M&Ps. The Taurus PT111 Gen2, points for me, like it was made for my hand.
After you have proved that the gun points for you, then try the trigger. Don’t be shy about asking if they have another gun of that type in the back room. I have seen where the trigger on one gun is better than the trigger of its twin. Sometimes an after market trigger, such as an Apex, is available for that gun.
If the gun points, has a decent trigger, has the qualities you are looking for, and has a reputation for reliability, then you found the gun you need.