How to Mitigate Pre-ignition Push 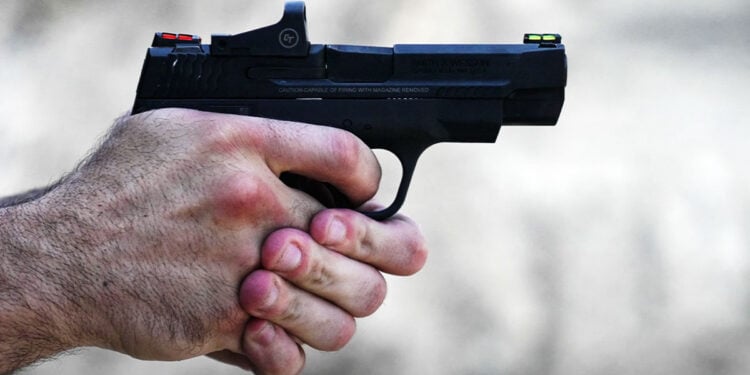 Shooters frequently talk about grip, sight alignment, sight picture, and trigger manipulation. Working the trigger gets the lion’s share of discussion, and such quips as “jerking the trigger” are common, although that phrase does not accurately reflect what ails many shooters. In terms of defensive handgun shooting, a well-developed grip technique and well-practiced trigger manipulation are the most important skills for success. Still, one issue that plagues most shooters to some extent or other, and is harder to deal with, is “pre-ignition push.” Fixing pre-ignition push is more mental than physical in nature, thus making it challenging.

To begin with, let me clarify the terms: pre-ignition push is often confused with “flinching.”

The two are not truly the same. A “flinch” tends to be a fear reaction in which a shooter is afraid of the blast and recoil. Give a new shooter a 44 Magnum revolver and let them shoot a few cylinders, and you will see a real flinch develop very quickly. Rather, pre-ignition push is something that almost all shooters deal with at certain times. It is the inevitable anticipation of the body to react to the recoil. It is almost impossible to get rid of. But it becomes an issue for the shooter when it becomes a problem with timing. If the body begins to push on the gun to control recoil before the bullet has left the barrel, the results are shots off target.

Almost all shooters suffer from pre-ignition push as it is all but impossible to truly get rid of. Understanding the fact that it is an ever-present challenge for most is the first step in understanding how to mitigate this phenomenon’s effects on your shooting. Pre-ignition push can be witnessed in an especially manifest way in new shooters. I have taken many brand new gun owners to the range for the first time, and, after extensive dry practice before any live fire, they are pressing the trigger well, and the first few live rounds go where they should. Within five or six shots, the hits start drifting low and left. This is often attributed to “jerking the trigger,” but it is really a result of pre-ignition push.

The reason that a new shooter gets the first few rounds off well then starts to pull shots is that the brain takes a few rounds to realize that the object in hand goes bang and pushes back when the trigger is pulled. Subconsciously, the brain clamps down on the gun, and if it does so right as the shot is breaking, we see the result on target. So, understand that this push is not necessarily a flinch, which is more pronounced and is a product of being scared to fire the gun. A flinch is a fear reaction, and it usually occurs when a newer shooter is actually afraid to fire the gun due to excessive recoil or blast. The best way to avoid a flinch is to not develop one by shooting heavy recoiling guns as an inexperienced shooter. However, the pre-ignition push is an issue that most shooters, even the best ones, deal with, and this issue can be more pronounced at certain times.

An Issue of Timing

The pre-ignition pcan’tan’t truly be eliminated, but it can be mitigated to the point where it will not throw accuracy off to a great extent.

Mitigating the push is actually a matter of timing. The brain will consistently attempt to clamp down on the gun in order to counteract the recoil impulse, so the timing of the push is what becomes important. If the push occurs prior to the round being fired, the impact of the shot will, obviously, be affected. If the push happens after the round has fired, then the bullet’s impact will not be affected by the push. Mitigating this push, then, is truly a matter of getting the timing right.

How can we get the pre-ignition push under control?

A key to successfully mitigating pre-ignition push is to do a lot of dry practice. When we dry fire the gun, we are executing all of the mechanics of firing the shot. In dry practice, watch your sights, and if your sights are remaining still when the shot is fired, it means your trigger press is not moving the gun. If, however, your shots go low during live-fire, it is a good indication that the trigger press is not the issue, but the pre-ignition push is.

A second and very important means of fighting pre-ignition push is to do ball and dummy drills. A ball and dummy drill involves firing live ammo at the range intermixed with snap caps. The idea of this drill is that you will not know when the gun will go bang or just click. This being the case, you will be able to witness exactly what your pre-ignition push looks like.

To do ball and dummy in an auto loading pistol, intermix several snap caps with live ammunition, and load them all into a magazine, not paying attention to where each round sits. When firing the magazine, you will have no way of knowing where the dummy rounds are and when you hit the dummy round, you are likely to witness a significant dip in the gun’s sights. This results in your pre-ignition push, which is seen because your brain is anticipating a round being fired.

A second way to easily do some ball and dummy work at the range is to load a magazine into your pistol and chamber a round, then remove the magazine. Then, fire two shots at the target. The gun will fire once and click the second time. On the click, watch what the sights are telling you. You can do this drill often during live fire to work on mitigating the push.

Doing ball and dummy drills often will allow you to work on mitigating the push as you will consciously be aware of it, and you will work on minimizing your natural reaction to the fired round.

Accept that you are probably like the majority of other shooters, and pre-ignition push will be an ever-present challenge. However, by incorporating these mitigating practices into your training, you can deal with this inevitable yet manageable physiological challenge to your performance.

I don’t necessarily agree with the timing comment. This results in shooters thinking about staging the trigger to just before the shot breaks. Then tighten their grip to control recoil. This is not good for defensive shooting. However, I do agree with the comments on dry fire and ball and dummy practice. Those are essential for accurate shooting of any kind. Whether you call it flinching, pre-ignition push, or jerking the trigger, I believe that understanding the principles of grip and trigger control, and using the correct grip and trigger control, will eliminate these kinds of issues. If a shooter practices the proper grip and trigger control they will be successful in placing accurate shots on target.