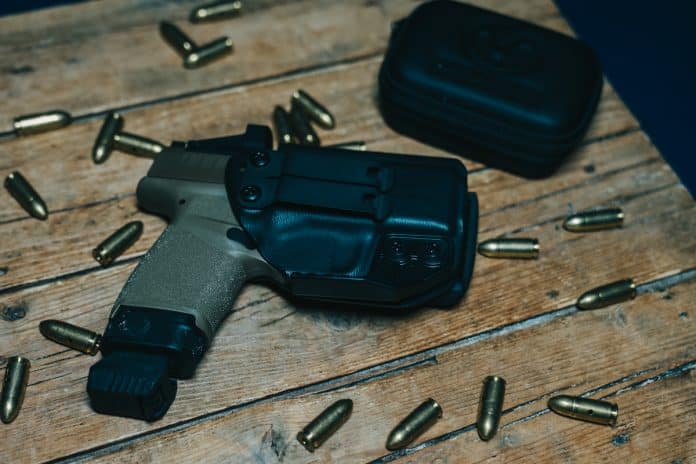 We are in the midst of COVID 19 reality, and even for those who are back to work we are generally doing far less in our normal routine. One thing that many shooters are finding diminished or absent is live fire training with their handgun. While shooting ammunition through your gun regularly is an essential part of skills development, a great way to offset the diminishment of your skillset is to embrace a daily routine of dry fire. Dry fire is actually just as critical in training as is live fire, and most contemporary top-shelf competitive shooters spend more time dry firing than live firing their gun.

Both live fire and dry fire practice are essential, but years of proof from top shooters has demonstrated that a daily dry fire training routine leads to huge gains in performance. In fact, most of the elements of gun handling and marksmanship can be practiced dry. Live fire proves essential in confirming the proper execution of these developed skills, and live fire is how we develop the skills involved in recoil mitigation. Short of this, however, most aspects of handling and shooting a defensive handgun can be practiced with no ammunition. During this time of ammo shortage and limited range access, how can we continue to maintain, and perhaps gain, skill through dry fire?

Dry fire must be done safely or you can end up with, at best, an unanticipated loud noise in your home, or at worst, a tragedy. When conducting dry fire you must strictly adhere to safety procedures. It is best to designate a particular place in the home as the dedicated location for dry fire. Unload your gun entirely before entering that area, and triple-check that the gun is unloaded. Have no live ammo in that area. Also, be sure that you dry fire towards a location with a secure backstop, such as into a concrete foundation, or towards something that bullets will not penetrate.

Refine your Grip and Trigger Press

Dry fire actually proves superior to live fire for working on certain skills because it is often hard to judge exactly what is happening when a handgun explodes and recoils in front of your face. It proves difficult to diagnose deficiencies in the mechanics of your grip and trigger press only in live fire. A great exercise to do in dry fire is to slowly and methodically aim the gun at a blank wall so that you can see the sights clearly against the background. Pay attention to your grip, being sure you have a high-tang, thumbs-forward proper grip, and press the trigger directly to the rear. During the press, notice what your sights do. The movement of the front sight will indicate if you have a tendency to jerk the gun downwards when firing, or if you tend to push the gun to one side or another when firing.

The truth is, our grip on the handgun has as much or more to do with the movement of the gun than does the trigger press. The human hand tends to move in sympathetic motion along with any single digit, so pressing a trigger in isolation is actually a very unnatural skill that takes a great deal of repetition to hone. Movement in the sights can indicate problems with your grip. If you find that the front sight moves towards your support hand, then adding more pressure with your support hand thumb can offset this tendency. Firing the gun without inducing movement is a matter of making your grip and trigger finger work together effectively. There are certain principles that are rather universal in doing this correctly, but since we all have different hands, finding the exact formula that works for you is quite individual, and requires some experimentation and a lot of practice.

Work on the Draw and Presentation

If we can refine down to the single most important skill involved in defensive pistol craft it is the ability to deploy the gun quickly to an accurate first hit. This is a skill that can absolutely be refined with dry fire. The ability to control the gun in recoil for fast follow-up shots relies heavily on live fire practice, but the skill involved in a fast and efficient draw from the holster to first hit can be obtained in your own home without a shot being fired.

All of the mechanics of the draw stroke can be analyzed and drilled in dry fire: focus on clearing the cover garment and obtaining a good grip, focus on the draw and meeting of the hands, and focus on building a solid two-handed grip as you press out towards the target. Be mindful of your presentation, so that you build the skill to have the sights of the gun already aligned once you come on target, rather than needing to fix your sight alignment as a separate step at the end of the extension. This skill will make your first shot from concealment much faster, but it takes a significant amount of repetition to build this automatic alignment on presentation.

Editor’s Note: You can use a Mantis X10 to analyze your draw stroke and it has other drills that will help you get better in the quiet of your own home. Check out the Mantis X10 today!

Dry fire is a perfect time to work on reloading skills. This can be accomplished with the use of snap caps, which are inert training cartridges. You can start with a gun that is locked to the rear and practice ejecting the magazine, retrieving your spare magazine that is loaded with a snap cap, and reloading the gun. While reloads are very rare, indeed almost non-existent, in defensive gun use in the civilian world, knowing how to reload your handgun efficiently is a fundamental skill.

A skill that is critical, and indeed more often needed in defensive gun use, is the ability to quickly clear a malfunction. Using snap caps, practice quickly clearing the four typical malfunctions that an auto loading pistol can experience. Practice a tap-rack clearance to clear a failure to feed or fire, an out of battery, or a stove pipe, and practice remedial clearance for a failure to extract or a double-feed.

How Much, How Often?

It is not uncommon for world-class shooters to spend several hours a day in dry-fire practice. For those interested in self-defense with their handgun, but not driven to be a top competitor, such a commitment is not likely, nor necessary. More is better, certainly, but many find dry fire quite boring. Short but frequent sessions, however, are better than long durations less often. Spending 10 minutes every day is more productive than spending an hour just once a week. Spending 10-15 minutes even three times a week will put you ahead of the vast majority of people who have, or even carry, a handgun.

Consider some of these suggestions in your own dry fire routine to build and maintain skill during the ammo drought, which might last a while into our future.

Do you have any input as to what is really safe for the gun?

J B
Reply to  Susan Lithcomb

Snap Caps or a barrel block should do you good. From the research I have done, in order to damage the striker it would take thousands of rounds of dry fire without snap caps or something else used. So most people even if they didn’t use snap caps probably would not do any damage to their pistol, granted it isn’t an antique and isn’t a 22lr.

Here is what I use and recommend:

That first shot is definitely important, but so are the follow-up shots. Anything to train the trigger press and control of subsequent shots without racking the slide?