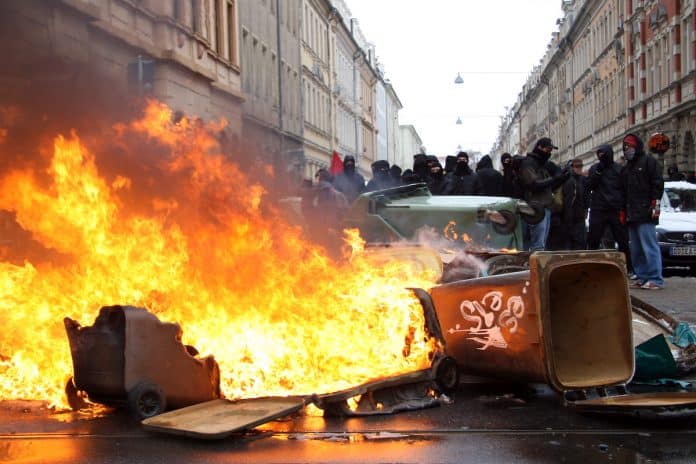 We are living in interesting times, politically. Certain factions of the American political spectrum now consider mob tactics and intimidation appropriate behavior against those who disagree with them on political issues. As a citizen, how does this factor into your self-defense plan? Should it change anything? If so, what should you re-consider?

The truth is, the principles of self-defense remain in play and defending yourself and others against mob violence does not necessarily change under the law. Force is justified only when facing an imminent danger, as perceived by a reasonable person. Response to such danger must be proportional to the danger.

Somebody throwing water in your face or knocking your hat off your head does not constitute a deadly threat, so shooting is not an appropriate response. But, such simple assaults may very well warrant a less-lethal response.

However, a mob that surrounds your vehicle, beats on it with clubs, and tries to open the door, very well may constitute a deadly threat. Responding with appropriate force, like using your vehicle as a two-ton battering ram in order to escape, may be justified if it is your only recourse for safety. So, let us discuss a few concerns related directly to such mob violence:

Prevention is the Best Medicine

Very often, such civil unrest is entirely avoidable. My advice is to avoid demonstrations at all times possible. Do not go to resist protesters at a given demonstration; you will only encourage more violence. Whenever possible, avoid being caught up in such events. Keep an ear on the local news to ensure that you know what is happening in and around your environment. When protests are scheduled, avoid the location. Be familiar with alternate routes to travel to and from work, or other locations, should demonstrations erupt within your vicinity. Be willing to add some time to your commute to avoid traveling through any area that has a scheduled event. The mentality that you are not willing to allow such nonsense to interfere with your routine is understandable, but reason must prevail here. Potentially dangerous situations should be avoided.

Even if you are caught by relative surprise, be willing to make a U-turn to avoid being surrounded by protesters. If you see a demonstration ahead of you, slowing down traffic, turn back and take a longer route. As armed and capable citizens it is our responsibility to de-escalate bad situations. If a potential confrontation is avoidable, take the opportunity.

I have been a proponent of carrying a less-lethal tool for a long time, and I think the mob violence that we have seen of late makes this case even stronger. Most of the confrontations that have occurred thus far have not warranted a lethal response. For those of you proclaiming that you will just shoot aggressive activists in the face when they come to your neighborhood, spare me. Shooting people who are not posing a clear and imminent threat will land you in prison quite readily. A lethal response is reasonable for a lethal threat, and if surrounded by multiple people who launch a violent assault, you will be justified in protecting yourself accordingly. However, most of these occurrences have not justified a lethal response.

There have been numerous examples, however, of people being harassed, screamed at, spit on, or intimidated in other ways, and this is where a less-lethal response is often justified. Pepper spray is the obvious choice here. Other tools such as batons or saps, illegal in most states, by the way, may constitute a higher level of force than permissible. Articulating the need to use a spray, however, is usually quite legitimate if you are in fear of simple assault by one or more people.

Don’t spray someone just for insulting you. There must be a reasonable fear of assault. Pepper spray proves a great tool for breaking contact with aggressive people when their actions are hostile, but not deadly. We have seen instances of politicians and every-day citizens alike being intimidated in public places. When somebody steps in your way to bar your exit from a restaurant, for example, a dose of strong pepper spray to the face is a great defensive alternative.

Many mob demonstrations occur on the street, and we are seeing the trend of streets quickly and unexpectedly shut down. If you find yourself in a situation where you are quickly surrounded, and you simply can’t avoid it, then consider the circumstances carefully.

Is the mob simply marching and not assaulting anyone? If so, just keep your doors locked and wait. You are not justified in running over peaceful protesters.

However, if the mob attacks your vehicle and is violently hitting the car and trying to open the doors, you have no reasonable expectation that you will be treated with new-found kindness should they get you out of the car. Such a situation can become a potentially lethal assault.

If your vehicle can move, under such a circumstance, do not get out. If the mob is indeed trying to breach your car, or flip it over, drive out. You don’t need to speed away and plow everyone over, but a two-ton vehicle can be used to push everyone right out of the way efficiently. Again, this is going to hurt or kill people potentially, and the only justification for doing so is that you were in legitimate fear for your life.

In terms of self-defense against a violent mob, the gun is likely the last resort. Civil unrest can most often be avoided. If taken by surprise by a group of harassers, leave the situation if possible. Most encounters are not lethal in nature, so a less-lethal response may be necessary, but nothing further. However, if all other measures fail and you find yourself under attack by a violent group of people, and you cannot safely remove yourself, the concealed carry handgun remains the option of lethal response, if justified, as it does in any other self-defense situation.