Guns in schools is a touchy subject, and even some gun owners and 2nd amendment supporters are surprisingly against guns in schools. We'd have to disagree. 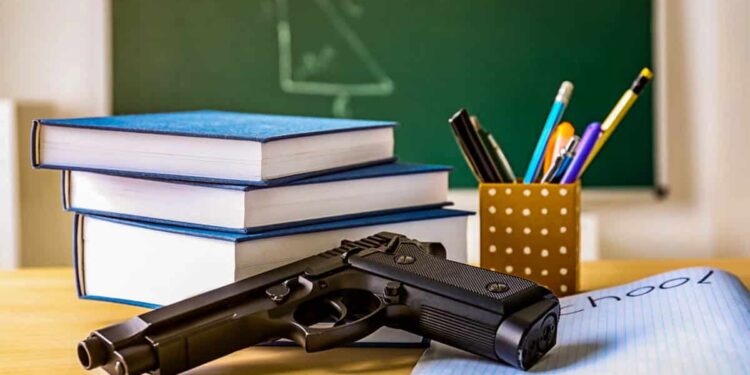 In the past few years, we’ve had our share of horrific shooting events that have marred the front headlines. Perhaps no dire and unpredictable the results, though, than that of a school shooting. In the vast majority of states, it is illegal for a civilian to carry a concealed handgun onto the campuses of elementary and high schools. For the most part, this was justified as the idea that a “gun-free zone” would somehow scare potential criminals into obeying the law. Stricter punishments, harder responses — these are things that only scare the law-abiding citizen.

Thankfully, many legislators have realized that the response time between an active shooter on school grounds and police response can be inadequate. That’s why one Oklahoma school system specially trained six teachers and administration to act as designated concealed carriers.

Each state has its own nuances in terms of existing gun laws and “gun-free zones.”  For example, in 2015, California passed measures to reverse their decision to allow concealed carry on campus.  This predominantly applies to universities and colleges but goes to show some states are actually in the process of further restricting 2nd Amendment rights for concealed carriers on school grounds.

Other states, like Wisconsin, expanded their definition of who was authorized to carry a concealed firearm onto school grounds — expanding it to include honorably retired law enforcement. This doesn’t seem like a particular giant leap forward, but it does illustrate the time consuming and bureaucratic process of changing laws once they’re implemented. And, in Illinois’ case, fully implementing new laws governing concealed carry in the first place.

Schools have often been the nervous middle ground where staunch gun supporters and anti-gun activists often meet.  On the one hand, no one wants to think about his or her child facing a dangerous threat while in school. School is supposed to be safe, right?

But that idea: schools are safe — how is that enforceable? Do we send a patrol of police officers constantly around the building looking for suspicious people with illegally obtained firearms? What about for parents who may have a pistol on their person for their own self-defense? A lot of questions come up during this process of determining exactly who should and who shouldn’t have access to firearms while on school grounds.

And believe it or not — that decision is being determined as we speak through court cases determining the constitutionality of the matter. One landmark case in Michigan determined that a school board did not have the authority to stop a man from picking up his child from school because he was openly carrying a pistol.

Taking a step back from that, we also see incidences of children taking firearms to school and using them against other children. Are teachers, faculty, and administrators prepared, willing, and able to use lethal force to protect another child’s life?

And let’s not forget the absolute stone-cold truth that violent criminal gangs are operating within our institutions of public education. They are free to roam, fight, skirmish for territory, and even carry out assassinations against other children.

Let’s be honest — this world is not getting any easier. An armed teacher or faculty member is going to be placed in some very hard positions. Does that mean we shouldn’t allow teachers and faculty to be armed? No. I think it means we need to have an honest discussion about the state of our country, our education system, and what steps are necessary to protect those we wish to protect.