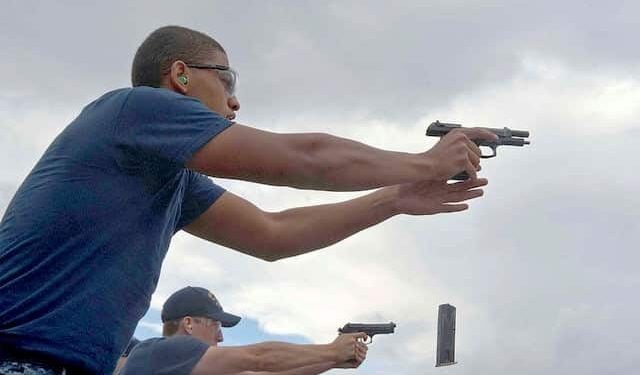 You can use several two-handed shooting stances or positions when shooting a handgun. Most shooters use two hands to shoot a handgun because it helps with stability by controlling movement, allows a speedier recover from the recoil, and helps with accuracy. Of the many, the Isosceles, Weaver, and Modified Weaver or Chapman Stances are most known and emphasized, like by the NRA. Of course, there is a great deal of controversy regarding the “best stance,” and really there is no ONE best stance, but the one that works for you and your purpose. Even one-handed stances and bench rest positions are used for competitions and certain training. Some claim that the Weaver stance is the best “combat-gunfighting” self-defense stance because it offers superior control of the handgun through its push-pull tension and “blading” (or slightly turning your body to the side) to present a smaller target for the bad guys. Others claim that the Isosceles Stance is being used more successfully in actual self-defense situations and by the military and law enforcement at close ranges up to 7 yards because it is more natural to assume it, easy to rotate sideways with it, and absorbs recoil bettter through the arms for more accuracy. Of course, all these claims by the various shooting stance advocates are highly debateable and “it depends.” The application is critical to personal success, and there are many, different hybrid techniques and applications. 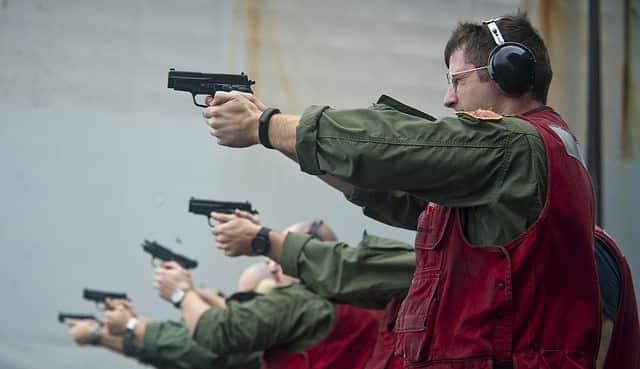 So, there are many variables for one to consider in making their own shooting stance decision. I know I was taught the Isosceles Stance early in my military career about 40 years ago, but since have used the Weaver and now have settled on a hybrid stance. Competitive shooters Rob Leatham and Brian Enos popularized the Modern (or Modified) Isosceles (MI) stance in their shooting matches over the last few years. The Army Special Operations training points out that the MI is the natural position people will adopt when startled by a perceived threat, even when trained in the Weaver or other stances. The MI stance is similar to the “Fighter’s Stance” which aims to keep you in balance and to react quickly and move in any direction easily.

Just take this Boxer’s Stance and imagine the boxer-shooter holding a gun in his hands. That is the basis of the MI Stance. It is easy and natural to assume it. Proponents of the MI stance point out that you don’t have to think about it and immediately go into the position… that you can utilize your body’s NATURAL position instincts to defend yourself. Again, the best stance is highly debatable and all stances have pros and cons to consider for deciding on YOUR stance. There are many variations of even the MI. One should strive to discover the particular stance that works best for themselves and then ingrain that into their training and practice, so muscle memory will automatically resort to that optimum stance for consistency and effectiveness. I have learned myself that Consistency does equal Accuracy when dealing with one’s shooting position.

It is essential to understand what the Modern or Modified Isosceles (MI) stance consists of. Remember, there are hybrid variations. The shooter keeps the feet apart about shoulder width and positions the SUPPORTING or weak foot AHEAD (about 6″ or so) of the other (like with the Weaver or Chapman stances.) In the MI the shooter LEANS Forward on the balls of his/her feet for better balance and recoil absorption. Moreso than in other Stances. The center of gravity is shifted forward, towards the balls of the feet. The MI encourages the shooter to put more pressure on the forward areas of the feet to keep from becoming flat-footed and losing balance. In the MI stance, the shoulders are Forward of the hips, and the hips are forward of the knee and lower legs. It is an AGGRESSIVE position.. remember you’re a boxer. Like the regular Isosceles stance, the upper body is generally more SQUARED to the target (but not squared entirely) and not excessively bladed (but slightly bladed) or turned to the side like in the Weaver or Chapman stances.

So, the upper body position is similar (but not identical) to the regular Isosceles stance. Both arms are braced STRAIGHT behind the handgun with the elbows at a natural extension and locked or VERY slightly bent like a boxer, depending on personal preference. This also allows two pivot points at both shoulders so you can rotate at the waist and cover the widest area left and right of 12 o’clock, comparable to a tank’s turret that naturally turns side to side. Shoulders are relaxed and down, not hunched upward. Some make this mistake which deviates from a true MI position. Again, what works best for you. To enhance recoil control, the gun is centered and close to the midline of the body. Recoil is absorbed passively by the body through STRAIGHT alignment of both wrists and through both arms. This is unlike the Weaver and Chapman stances that rely on the dynamic push-pull isometric tension technique to actively control recoil. The MI stance relies instead on a natural, static contraction of the hands, arms, and wrists, passively absorbing recoil through the straightened arms, wrists, and body, rather than with the hands and wrists as in the Weaver. I know for me the recovery time between shots is faster with the Modern Isosceles and muzzle flip is decidedly less since the arms, wrists, and body weight are actively involved in absorbing recoil, along with an enhanced firm shooting grip.

Recognize that when the upper body is mostly squared to the target, your peripheral vision is better with the MI stance. Note that the Weaver or Chapman positions naturally limit the peripheral vision of your weak, non-firing side, especially for those that tilt their head to the side to align their sights. I notice that since I am right-handed and aim with my head tilted a little to the right, there is a blind spot on my support side (left.) If you are left-handed, there would be a blind spot on your right. So, the MI position itself allows you to have the greatest extent of wide-field, peripheral vision possible. This is one of the reasons, along with better recoil control, that I switched from the Weaver to the MI Stance. Test it by having a fellow shooter walk 180 degrees around you from about 15 feet away to see how well you can see them when you are aiming. So (at least for me and most), the MI position initially allows me to more easily shoot and swivel especially to my weak side when moving and shooting.

With the MI stance, the knees are slightly bent, and the shooter aggressively LEANS forward with his upper body in an aggressive combat manner toward the target. The MI position primarily varies from the Isosceles because you tilt your upper body forward more with the MI. The muscles and tendons of both forearms, the elbow joints, wrists, and hands are set in a medium to firm static contraction, depending on the amount of recoil and gun you’re shooting. The rest of the body is more or less relaxed, based on individual preference. The axis of recoil is roughly through the centerline of your body. Stability is achieved by shifting the center of gravity forward and keeping the hands close to the same height as the shoulders to prevent the arms from pivoting up in recoil. Note that if the shooter is wearing body armor, then the full body armor is mostly exposed to the bad guy with the MI stance enhancing the shooter’s safety, rather than with the Weaver or Chapman that exposes the weaker armpit area of the shooter’s side that is uncovered by the armor when the body is bladed more to the side. Again, there are application variations and hybrids that affect this.

With the MI and its position of the hands, the shooting grip places the heel of the support hand very close to boreline, which decreases the leverage the gun has in recoil as well as placing the tendons of the support hand and wrist in a straight line. This inherent placement in the MI results in a stronger grip in which both wrists are locked, and both arms are straight or just slightly bent.

So because of the many advantages and natural nature of the MI Stance, does this mean that the Weaver and Chapman stances are not worth using. Definitely NOT! There are a high number of shooters and competitors who have trained with the Weaver and Chapman and successfully apply them and prefer them for various great reasons and purposes. For several years, I used the Weaver and Isosceles Stances and was moderately successful with them. I changed to the Modern Isosceles and have found I am now comfortable with it and it has helped my accuracy and flexibility. I still must practice regularly and have a way to go for improvement. Recognize that each and every one of the above advantages of the MI stance has counterpoints to consider and that all stances have pros and cons. Try the MI and other stances for yourself to decide which is best for YOU. Continued success!

A “Survival Item” to Store with Your Gun

Shooting with Eyes Open or Closed?

Col. Ben is retired with 30 years service in the U.S. Air Force, with joint services weapons training, Special Ops duty at various bases, and is Air Force qualified as “Expert” in small arms. He is a Vietnam-era veteran and serves on the Board of Directors for the Florida Veterans Foundation of the Florida Department of Veterans Affairs and for the Veterans Memorial Park Foundation. Ben is an experienced NRA-Certified Pistol Instructor, NRA Range Safety Officer, and FL Concealed Carry License Instructor. His doctorate is in business and education and he has served as director of legal affairs for an organization and taught university business law. He is a graduate of two law enforcement academies for civilians. Ben wrote the book “Concealed Carry and Handgun Essentials for Personal Protection” (second printing) with 57 comprehensive Chapters about concealed carry and handgun principles, techniques, and tips for both experienced and new shooters. His reference book is endorsed by several organizations and is available on his website at FloridaHandgunsTraining.com. Contact him at ColBFF@gmail.com.

Shooting with Eyes Open or Closed?