Modlite Handheld PLHv2 Review: The New King Of The Jungle? 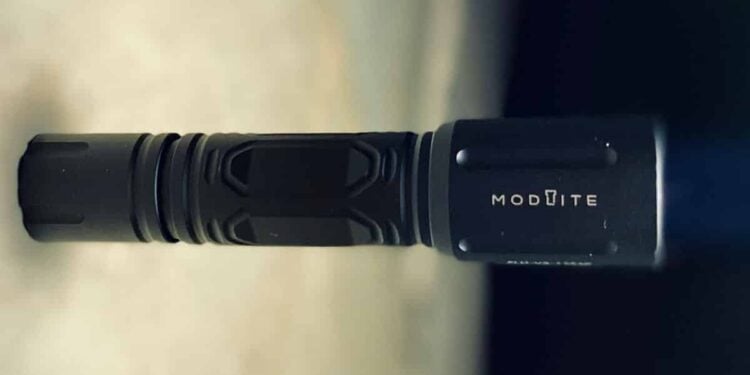 The “lumen wars” are alive and well in the gun universe. It seems like every few months someone is making a new light better than everyone else’s. For a long time, Surefire was considered top of the heap for “tactical” lights, with a price tag that matched that status. There are a few new players in the game though, and Modlite is punching above their weight class as a relative new comer to market. They first put lights on the market about the middle of 2019, and already their lights are what all the cool guys are raving about on the internet (myself included, although I don’t have “cool guy” status).

Modlite started off as a guy wanting a light better suited for use on rifles. That means he needed lights with the candela to push the beam further downrange. If you aren’t familiar with the terms, lumens are the total amount of light output. A light can have a really high lumen rating, but the beam is fairly short range. See Surefire’s Max Vision lights, and most other lights with really high lumen ratings. Candela is the measurement that tells us how far a beam will go, and is basically independent of lumens. That is why an old 180 lumen X300 will still throw a decent, albeit more narrowly focused beam.

Since throw is what a rifle light needs, that is where Modlite decided to up the ante. After the rifle lights were a success, a handheld version followed. Surefire’s powerhouse handheld, the Fury DFT, has a candela rating just under 25,000. Modlite’s PLHv2 handheld pumps over 50,000 candela downrange. This gives the Modlite PLHv2 significant reach, far outclassing anything else currently available. It isn’t just about reach though. All that candela helps the light push through photonic barriers too. Things like smoke, fog, windows, and other light sources. Being able to see through things can be just as valuable as being able to see things far away.

Most things in life are a tradeoff though, and Modlite hasn’t escaped that rule either. The wizardry that has allowed Modlite to have a 1,300 lumen handheld sized light with mega throw, and not have such a focused beam that the spill is useless, comes at a price. A touch over $300 to be exact. Just like the candela rating outclasses most other options, so does the price. It is a significant barrier to entry, unquestionably.

How It Shows Up

That $300 gets you the light, either the 18650 or smaller 18350 version. One battery (spares are easy to find online), and the charger. The runtime on the 18650 version is about 1.5 hours. The smaller battery only makes it about a half-hour. Their runtime estimate seems about right for the 18650. I did not test a 18350 version of the light. I could usually get the light to make it 3-4 weeks before needing a fresh charge. 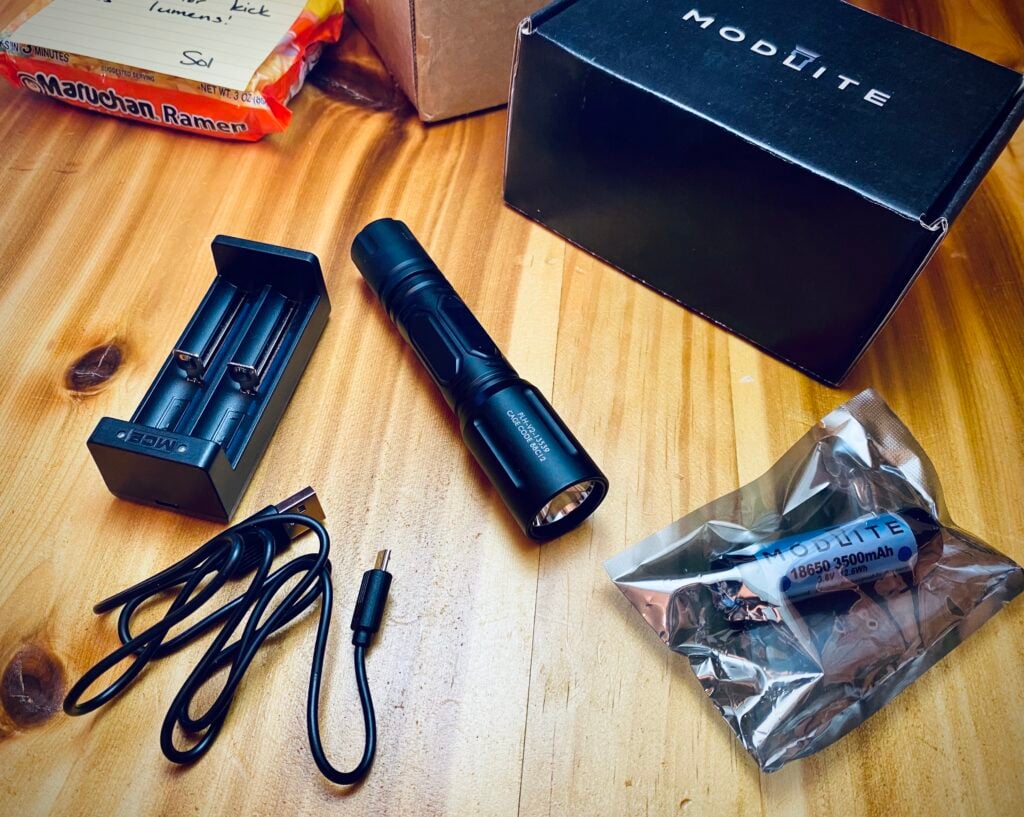 It doesn’t come with a pocket clip, which I think is annoying, but not the end of the world. There are some decent options out there for adding a clip to the light. Depending on where someone orders the light from, they might even recommend a bundle with a clip when the light is ordered.

There is a “low battery” indicator. The light will flash, and then reduce output when the battery is nearing the end of its charge. Don’t freak out like I did and think that there is something wrong with your light. It is just a friendly reminder that the battery is getting low. It will still function for a bit at the lower output to get someone by, but it is not longer the powerhouse that it is with a better charge on the battery.

The tail cap switch is a basic click style switch. Push in a little for momentary-on, push until it clicks for constant-on. This is fairly common on “tactical” lights. It does leave the light a little short for EDC use in my opinion though. Quite honestly, for the most menial task that our EDC lights get used for, the PLHv2 is overpowered. It isn’t well suited to any close-up task where only direct lighting can be used. Those menial sorts of things we do with EDC lights like dig around under car seats or fiddle in the engine compartment because something doesn’t sound right.

Who are we kidding though? The designed purpose for the light is singular, and the execution reflects that. When the chips are down and you need all the horsepower you can get, I think the PLHv2 is unrivaled (for now). If you want something a bit more well-rounded, I wouldn’t look here. Think of it like a race car. They generally don’t do well cruising around on the street, that isn’t their purpose. They are built for the racetrack. The same is true of the Modlite. It runs with the gas pedal smashed into the firewall, and that is all it does.

The light is undoubtedly good. Excellent actually. Build quality is top of the line. The size is reasonable. Everything does exactly what it is advertised to do and does it well. The question becomes whether or not it is worth the $300 price tag? There is some personal decision making that has to go on to get a real answer to that question. Since I am not you, I leave it to you to decide. What sold it for me, is that this light does something no other light in the “EDC” category can do.