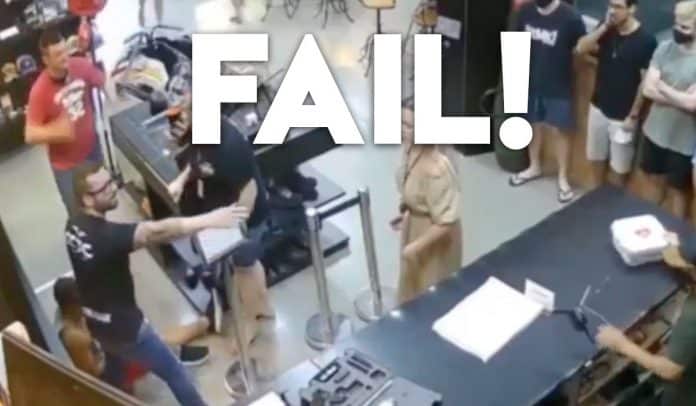 The internet has an abundance of videos showing people doing careless things with guns but I can’t say I’ve ever seen one like this where all of the safety rules are violated in one incident.

The video starts out with two guys at a gun counter examining a semi-auto handgun. The larger man in the red shirt seems to be struggling to open and lock the slide back on the gun they are looking at. While doing this he muzzles both his friend and himself before fairly quickly giving up and putting it down with the muzzle pointing at his friend on his right. The friend notices this and turns the gun away from him.

Frankly, I’ve seen a lot of this at gun stores with new buyers who have no idea how to properly handle a gun. But this is where the first real safety fail occurs. The employee behind the counter is distracted by other customers and is not immediately supervising these guys. Presumably, he showed the pair that the gun they were examining was clear as is normal practice at any gun counter but he fails to stay in control of the situation.

Major fail number two occurs when the man in red unholsters his loaded gun at the counter. While this guy should have known better this one falls on the employee behind the counter for not seeing this move and immediately ordering him to reholster. (And then ushering him out of the store for that move)

The guy then removes the magazine and operates the slide a couple of times but does not appear to pull it all the way back and for sure doesn’t lock it open. He then appears to place a single round on the counter but again he doesn’t lock the slide back and doesn’t show his friend an empty chamber. In fact, it doesn’t appear like he ever looked himself beyond maybe a quick peek. Fail number three with no employee paying attention to what’s happening.

It’s apparent that he thinks his gun is clear so he starts to show his friend some feature. He then starts working the slide but again he appears to have trouble locking it open. At this point, it is obvious that his finger is on the trigger as he’s attempting to work the slide. Major fail number four.

Then, you guessed it, he muzzles his friend again while he’s doing this. Fail number five. The gun counter employee is six feet or so away from this totally engaged with other customers and not watching or apparently even noticing that this is going on. We have to give the employee another fail (number six) for not catching on to what’s happening.

It’s during this moment that the gun goes off and the friend catches a bullet in the abdomen. Fail number seven of course but this one has serious consequences. The red shirt guy is totally shocked of course. Other employees immediately come to assess the situation and call for what appears to be a medical kit which the guy behind the counter is able to retrieve. Counter guy though stands there apparently clueless until told to get the medkit. Fail number eight falls on store management for not properly training this guy in the first place.

The extent of the injuries and whether or not the victim recovers is unknown. Comments say this happened in Brazil so it may be tough to learn the outcome.

By my count, there were eight opportunities (maybe you can find some more) to prevent this negligent discharge. Some may want to call it an accident and that would be true to the extent that red shirt guy didn’t intend to shoot his friend and he did appear to attempt to clear his gun but not following the universal safety rules multiple times makes this negligence.

While there were a whole string of failures that led to this “accident”, I see two that are the most prominent. First, a loaded gun never comes out of the holster in public unless someone is facing a deadly force threat and is fully justified to use it to protect life. Gun stays in holster, no one gets hurt.

Second, red shirt guy cannot safely operate his slide or the one on the first gun they were looking at either. During his struggle to run the slide, his trigger finger slips in and when the slide drops the gun goes bang and his friend is shot. Had he locked the slide open right after pulling the magazine, there likely would have been a much better chance that he finds that round in the chamber. As it was, it looks like he assumed the round he placed on the counter was the one that came out of the chamber. What exactly happened there I do not know but one is never to assume anything regarding the safety rules. Visually check the chamber to confirm that it is indeed clear and no one gets hurt.

I’ve seen this on the range. Someone either doesn’t have the physical strength, the proper technique, or the coordination to push up the slide release button while pulling the slide all the way back. They get so focused on working the slide that they completely lose track of what they are doing with the muzzle. Red shirt guy points the first gun’s muzzle at himself while trying to run the slide. If you can’t safely run your slide then you need some training help, maybe physical training to improve your strength or you just have the wrong gun for you.

This is one of the first things that everyone should do when shopping for a handgun. That is, determine if you can pull the slide back and lock it open while maintaining muzzle control. If you can’t do this with reasonable effort then move on to the next one in the store case until you find one that works for you. And read the instruction manual. Know how your gun works. Be safe!

Firearms ownership is NOT for everyone. If you’re a retard, stick to video games. Please! For everyone’s safety.

Looking at the video – notice the round from the chamber is gone from the table. It seems for some reason the guy in the red shirt put it back into the gun… Weird,,, also video skips – looks to be edited right before that moment.

ABOUT US
USA Carry has provided essential concealed carry resources since 2007, such as our Concealed Carry Maps, Concealed Carry Info by State, Firearm Forums as well as Concealed Carry and Firearm-Related articles, reviews, news and more.
FOLLOW US
© © 2020 i156 LLC. All Rights Reserved.
wpDiscuz
3
0
Would love your thoughts, please comment.x
()
x
| Reply
You are going to send email to
Move Comment