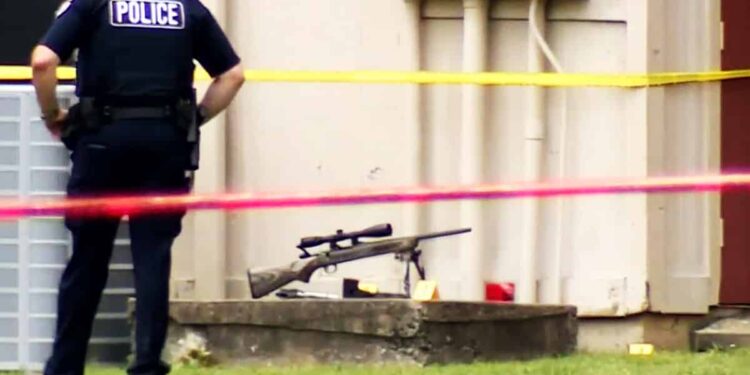 Zachary Arnold, 26, was shot dead by an armed neighbor after he was yelling and attempting to lure the fellow residents of his apartment complex out to shoot them.

Two neighbors came out, one of which went back inside without locking their door. This was when Arnold entered the residence of Lois Hicks, 87, where he shot and killed her with his semi-automatic rifle. Arnold and Hicks also lived in the same complex.

“He was yelling and screaming, “You guys get out here, come out here, everyone get out of this building right now,” says Janey Peugh, a resident of the apartment complex.

The rest of the neighbors, except for one resident, took cover while Arnold continued to shoot into the residences. That one resident obtained his hunting rifle, shooting and killing Arnold.

“If he didn’t do that, who knows how much worse it could have gotten,” said Amber Lane, another resident of the complex.

The investigation is still ongoing, but Arnold’s family said he was a veteran and suffered from PTSD, and had a gun “because he was an avid hunter.” They also say it was a random incident.

Those aiming for gun control from law-abiding citizens are quick to denounce guns until they are in danger themselves. Had there not been the one armed neighbor, one could only truly wonder how things would have turned out. Those opposing guns can question why people follow the 2nd Amendment so avidly, but the fact of the matter is that when things go down, those unarmed will look and hope for someone to eliminate an immediate threat with appropriate force.

Regarding Arnold, he was rather a young sufferer of PTSD, but it does not excuse the crime he committed at all, as for any similar case. Again, the gun is not the issue here. The state of one’s mental health is an overlying factor as to why these incidents occur. Those suffering from PTSD or any similar conflict should seek help from professionals or even a peer. One could only imagine what Arnold’s thought process was as he tried to pick apart his complex.

With the topic of self-defense weapons, the neighbor showed that ultimately whether pistol or (hunting) rifle, as long as you have that tool and you feel you are most proficient with it, you are already giving yourself the ability to counter another deadly force.

The Basics of Shotgun Dry Fire