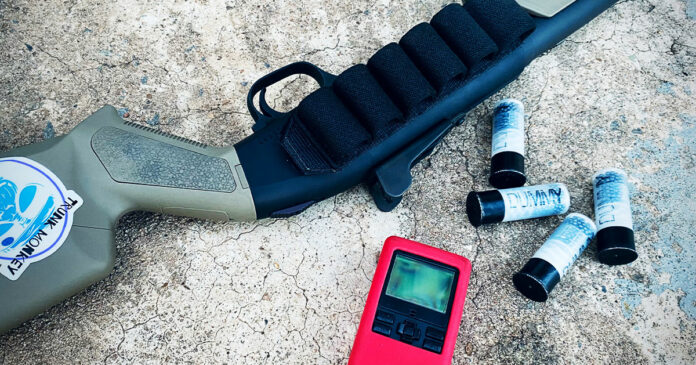 Everyone who is clued in on trying to shoot better knows what dry fire is. Most of us probably use dry practice with our pistols on a fairly regular basis. Especially now that pistol ammo cost about 50 cents per round in most places. How do we apply the same concepts we use for dry practice with the pistol to the shotgun used for home defense? Here are my thoughts.

First, we need the right equipment—namely, dummy rounds. You can get by without having dummy rounds for dry practice with a pistol or rifle. I think they are pretty much mandatory with a shotgun, though, especially a pump shotgun where the shooter is responsible for cycling the action. Obviously, we need them to practice loading the gun. That pretty much goes without saying. However, we also need something in the gun that allows it to mimic actual function when the ammo is live.

If you have run a pump gun without ammunition and then run the same gun on the range with live ammunition, you will know it feels different with ammunition in the gun. The action is not quite as fast with ammo in the gun, almost like it bogs down just a touch. I would assume because of the weight of the shell being run through the mechanism of the gun. Good dummy rounds replicate a loaded shell’s weight and cause the gun to run the same as it does with live ammo in it. Minus the recoil, of course.

Dummy rounds also keep us honest. One of the oft-spoken about issues with pump guns specifically is short stroking. Not running the action completely to the rear when cycling to the next shot. This will eject the shell just fired but won’t load a new shell into the chamber. If we short-stroke the gun with dummy rounds, we will find out when we cycle the action again, and nothing is ejected out of the gun, or if we check the chamber and it is empty.

Other than dummy rounds, there isn’t much else we need other than a safe backstop. A timer is nice but not required. Now we can focus on what skills to develop with our dry fire. The first shot is always the most important, so it should get due focus. We should work this from whatever ready positions we intend to use. We can combine this with other handling characteristics of the shotgun to start building good habits. Some specific things to include in our shotgun practice that we don’t have to with other guns we dry fire with are safety manipulation, cycling the gun aggressively without any delay, and topping the gun off after each shot or string of shots.

The Most Basic First

The thing about shotguns is that if I manage my ammunition correctly, the gun never runs dry as long as I have ammunition somewhere within reach. I don’t have to wait for the gun to be empty to put more ammunition in it, and a shotgun with one round on board is still a loaded gun. Done correctly, time and circumstances permitting, I should never have an empty shotgun. The general rule is, whatever you shoot gets put back in the gun as soon as practicable.

The dry fire drill would look something like this.

Repping the drill that way, we are actually practicing many things that aren’t just shooting the gun and programming in good habits. This maximizes our dry fire and should translate to the range pretty well.

Being Ready for When it Goes Wrong

Another skill worth working on that is not included in that sequence is emergency loading or port loading the shotgun. This is how you fix actually having a completely empty shotgun. There are a couple of different ways to port load a shotgun. I won’t get into the technique’s nuances; maybe another day, pick a way and stick with it.

We would start from ready again for this drill, and the sequence would look something like this.

Working the drill in that order, we are again building good habits, setting ourselves up to end with a loaded gun, and repeating the drill.

Enjoy, and work those shotguns.