31 States (In White) have banned Corporal Punishment in schools

19 States (in red) have laws permitting Corporal Punishment in schools

According to the top ten Google results (listed below), NY has banned Corporal Punishment:

What does this question have to do with personal protection laws?

Good question. It has to do with it more than you think. Did you know that New York State, by law, is in fact a Corporal Punishment State? In fact, only by the policy of public schools is it not one. The law provides 100% legal right for not just public schools, but private schools, daycare centers, licensed babysitters, church Sunday schools, and yes, even parents, to paddle their children as a disciplinary measure. It is simply the lack of exercise of corporal punishment that has created the belief it is illegal, but that is just an incorrect conclusion. Let’s look at what the laws and the NYS Department of Education says…

Here is a screenshot of the NYS Department of Education’s public website showing their assumption that Corporal Punishment might be used (as it is lawful) and the policy for handling not the incidents of when it happens but simply the complaints of its use. 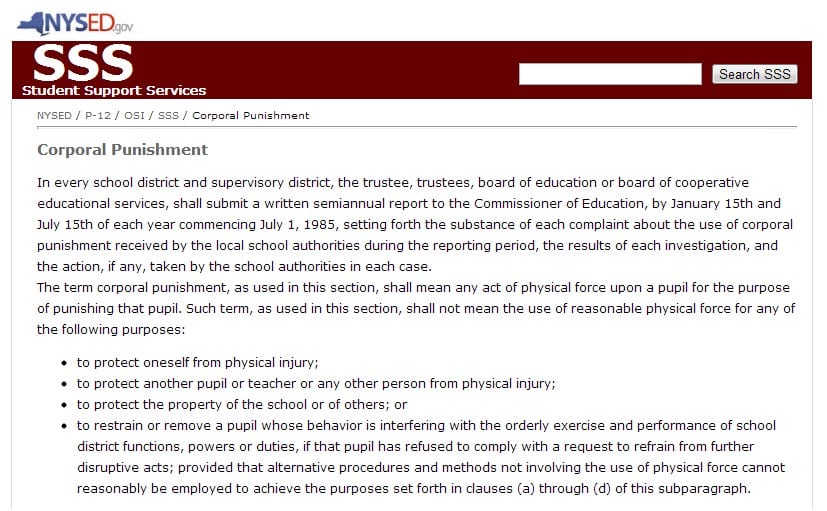 The point being made here is that much like spanking, hearsay has contributed more to people’s false confidence in, or to the contrary, their unnecessary fear of, the legal right to use a gun to protect oneself or their family. True confidence in the use of a gun comes not only from your developed skill and determination to act, but from the correct knowledge of the laws put in place to protect oneself from any criminal charge whatsoever.

This outline is nothing more than just that, and does not presume to provide all of the necessary knowledge to make an informed decision regarding every possible circumstance that comes to one’s self. It will however hopefully dispel some myths regarding New York’s support of the use of a gun, or any other tool, for protection of life, limb, and property. So let’s get to it.

Castle Doctrine is a legal treatise that formulates around the philosophy that a “man’s home is his castle.” It provides legal presumption of an intruder’s intent to inflict serious bodily harm or death to the homeowners simply by their unlawful entrance into said home. Castle Doctrine relieves the homeowner from their duty to abandon their home or their obligation to announce their intentions to use deadly force when defending themselves and/or their property.

With Castle Doctrine, someone unlawfully entering your property will legally provide proof of your intruder’s intent, but it still leaves the burden of proving their ability and opportunity to do serious physical injury on you. This is normally a very important and essential key to someone’s justification of their use of deadly force in self-defense because in most states your legal defense will consist of having to provide evidence of your attacker’s Ability, Opportunity, and Intent to do serious physical injury to you (or someone else), otherwise known as an Affirmative Defense. We say normally, because while most states put the burden of proving such things on the defendant, New York does not!

Most states consider the use of deadly force in self-defense an Affirmative Defense – not so with New York:

“THE RIGHT TO DEFEND ONESELF OR ANOTHER WAS EARLY CODIFIED IN THIS STATE AS AN INTEGRAL PART OF THE MURDER STATUTES, AND THIS COURT HAS LONG HELD THE PEOPLE HAVE THE BURDEN OF DISPROVING BEYOND A REASONABLE DOUBT A DEFENDANT’S CLAIM THAT HE WAS ACTING IN THE EXERCISE OF THAT RIGHT. ACCORDINGLY, JUSTIFICATION UNDER THE PENAL LAW IS AN ORDINARY DEFENSE RATHER THAN AN AFFIRMATIVE ONE. AS SUCH, WHENEVER JUSTIFICATION IS SUFFICIENTLY INTERPOSED BY THE DEFENDANT, THE PEOPLE MUST PROVE ITS ABSENCE TO THE SAME DEGREE AS ANY ELEMENT OF THE CRIME CHARGED.” PEOPLE V. MCMANUS, 67 N.Y. 2D 541 (1986)

1) When a “defense,” other than an “affirmative defense,” defined by statute is raised at a trial, the people have the burden of disproving such defense beyond a reasonable doubt.

2) When a defense declared by statute to be an “affirmative defense” is raised at a trial, the defendant has the burden of establishing such defense by a preponderance of the evidence.

This means that where most states require the defendant to prove they were innocent, New York leaves the burden on The People (through the discretion of law enforcement and the justice system) to prove that it was wrong for the “victim” to defend themselves with deadly force. The advantage to this however is that it is procedurally more in line with Fifth Amendment protections and its justification is generally more flexible in decree.

“JUSTIFICATION DOES NOT MAKE A CRIMINAL USE OF FORCE LAWFUL; IF THE USE OF FORCE IS JUSTIFIED, IT CANNOT BE CRIMINAL AT ALL. …THE DEFENSE DOES NOT OPERATE TO EXCUSE A CRIMINAL ACT, NOR DOES IT NEGATE A PARTICULAR ELEMENT OF A CRIME. RATHER, BY RECOGNIZING THE USE OF FORCE TO BE PRIVILEGED UNDER CERTAIN CIRCUMSTANCES, IT RENDERS SUCH CONDUCT ENTIRELY LAWFUL.” PEOPLE V. MCMANUS, 67 N.Y. 2D 541 (1986)

(i) in his or her dwelling and not the initial aggressor;

A person in possession or control of any premises, or a person licensed or privileged to be thereon or therein, …may use deadly physical force in order to prevent or terminate the commission or attempted commission of arson (as defined in Article 150), or

A person in possession or control of, or licensed or privileged to be in, a dwelling or an occupied building, who reasonably believes that another person is committing or attempting to commit a burglary of such dwelling or building, may use deadly physical force upon such other person when he or she reasonably believes such to be necessary to prevent or terminate the commission or attempted commission of such burglary (as defined in article 140).

So while there is a “no duty to retreat when in your home” and the legal protection afforded against “burglary” it is not the same as actual Castle Doctrine and the incorrect interpretation of them has contributed to the myth that New York is a Castle Doctrine state.

Is New York a Stand Your Ground State?

Much like Castle Doctrine, Stand Your Ground Laws are based on the legal treatise which generally relieves any duty or other requirement to abandon a place they have a legal right to be, or give up ground to an assailant, and can use deadly force to uphold it. The main difference between Castle Doctrine and Stand Your Ground is whether the lethal confrontation takes place in one’s home or not.

While this sounds like a “catch-all” for the legal use of a gun in self-defense, it still does not provide the legal presumption of the attacker’s intent to do serious physical injury to the “victim.” Just ask George Zimmerman. What is important to consider however is that Stand Your Ground Laws have a significant deterrence factor, but generally requires a very large amount of responsibility, patience, ability to act cool under pressure, and level-headedness on the part of the gun owner. Remember, there are three ways to deal with a potentially lethal encounter:

And again, because New York State is not an Affirmative Defense State, there is no legal way to provide for Stand Your Ground Laws. In addition you are under the legal obligation to retreat when not in your own home and it’s safe to do so (for yourself and others).

So the real question is, “What do we do with this information?”

America, Do We have Rights or Privileges?

Johnathan is a NRA certified firearms instructor currently serving the Northern Finger Lakes Region of New York State. He is qualified to teach the entire PISTOL discipline of the NRA shooting courses: Basic, F.I.R.S.T. Steps, Home Firearm Safety, Personal Protection Inside the Home, Personal Protection Outside the Home, Advanced Personal Protection, and is also certified by the DCJS to teach NYS self-defense and use-of-force laws. He became familiar with firearms through professional instruction and had to learn like most of his students - from the ground, up. Contact Johnathan today to learn what many do not, that, "Knowing when to shoot is just as important as knowing how."

America, Do We have Rights or Privileges?