Night Sights versus Fiber Optics: Which is Right for You?

Two of the most popular types of replacement sights for handguns are night sights, and fiber optics and both have a devoted following. The truth is, each excels in a different role and deciding which is best for you should depend on the intended use of the particular gun. 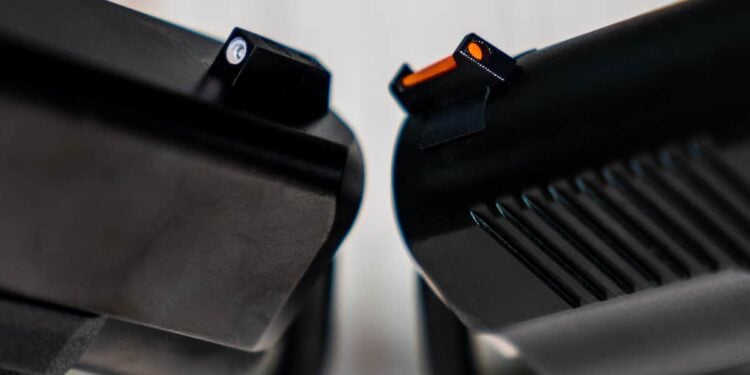 There is no end to the debate between different gear preferences in the gun world. Glock or Smith and Wesson? Revolver or auto? 9mm or 45acp? Many of these arguments are rather juvenile, worth little more than entertainment value. Occasionally we come across a debate that does warrant some consideration. One gear choice that does deserve some thought for any discerning shooter is sight selection.

Two of the most common styles of sights that come on factory guns, and indeed the two most common after-market options, are night sights and fiber optics. Each sight style has a devoted fan base who will argue the merits of their chosen technology. The fact is, however, that each of these sighting systems accomplishes a specific task better than the other and the argument over “which is better” is not an argument at all. The choice should be “what is the primary role of my specific handgun that I am looking to upgrade?” This is the only way to determine what style of sights you want on the specific firearm.

What are Night Sights Good For?

Night sights rely on the use of small vials of radioactive chemicals that glow in the dark. Seriously. These vials usually glow brightly for quite a few years. The benefit to night sights should be obvious enough: they allow you to see your sights when it is dark. The usefulness of night sights is a topic of debate, but I find that the debate is often framed in a misunderstanding of what the night sight actually does.

Some people say that night sights are worthless. After all, why should anyone shoot in total darkness? We need to use a light to identify our target as shooting at unidentified targets is a prescription for disaster. When shooting in conjunction with a light, the night sights typically wash out and do not display their glow anyway. Therefore, since low-light shooting requires the use of a light, why use night sights? This argument misses the actual benefit of night sights. I have found that it is essentially true that night sights serve no advantage when shooting with a light, but that is not what they are useful for; rather, night sights prove to be a huge advantage if you are in complete darkness, yet your target is in the light.

Illuminated Threat While You Are in the Dark

Imagine the need to engage a threat that is standing in front of a vehicle at night, but the threat is illuminated clearly by the headlights. You have retreated to the rear of the vehicle, and you are in complete darkness. Or, perhaps you are in a dark room looking beyond a doorway into an illuminated room where you can clearly see the threat. You can see the target, but if you have conventional handgun sights, they will be invisible to you. If you can already see the target, turning on a flashlight only to illuminate your own sights is a huge disadvantage.

However, when you are in darkness and the threat is already illuminated, night sights allow you to make accurate hits. They glow brightly, allowing you to align the sights on the visible target. The niche role that night sights are useful for is limited, but they are very effective in this role.

What are Fiber Optic Sights Good For?

Fiber optics remain usable in any conditions of adequate light, but they do not work nearly as well in-doors or in reduced light as they do in bright sunlight. Even when using them at an indoor range the fibers will not be nearly as bright and visible as when shooting outdoors in daylight. They can be used in conjunction with a hand-held flashlight, though they offer no significant advantage over standard sights as the illumination from the flashlight will not usually make them light up the way sunlight does.

Which One is Right for Me?

I will say right from the beginning that I have night sights on all of my self-defense handguns. I find that they offer an advantage on a defensive firearm that other sight styles do not. Also, I admit that fiber optics allow me to shoot better when shooting in bright daylight. As you can see, my choice is based on my anticipated role of the gun rather than on what gives me the best performance at the shooting range.

Most defensive gun uses occur during hours of, or in environments of, low-light. However, in the civilian world, rarely do they occur in conditions of no-light. There is a difference. Criminals prefer to operate in reduced light, but they rely on ambient lighting from the environment, they are not vampires. Like you, they need some light to navigate. Civilian defensive gun use rarely involves the use of a flashlight. Crime happens in places like parking lots, almost all of which have ambient light from street lamps and other illumination.

In such environments, night sights offer little advantage over fiber optics, or even conventional sights, for that matter. However, fiber optics also offer no substantial advantage in low-light conditions. Therefore, in the most likely light conditions of defensive shooting, neither sighting system offers a substantial advantage. But, night sights offer the advantage discussed earlier, allowing you to shoot if you are in complete darkness, but the threat is illuminated. This is a circumstance that is uncommon, but possible. Therefore, night sights are my choice.

If you are equipping a handgun for target shooting, completion, or strictly range work, I would suggest that fiber optics are the way to go. However, if you are upgrading the sights on a carry gun, I think night sights deserve some consideration. In the end, there are a myriad of other details that probably matter more. But choose according to the intended role of the gun. The devil is in the details, and the details might matter one day.