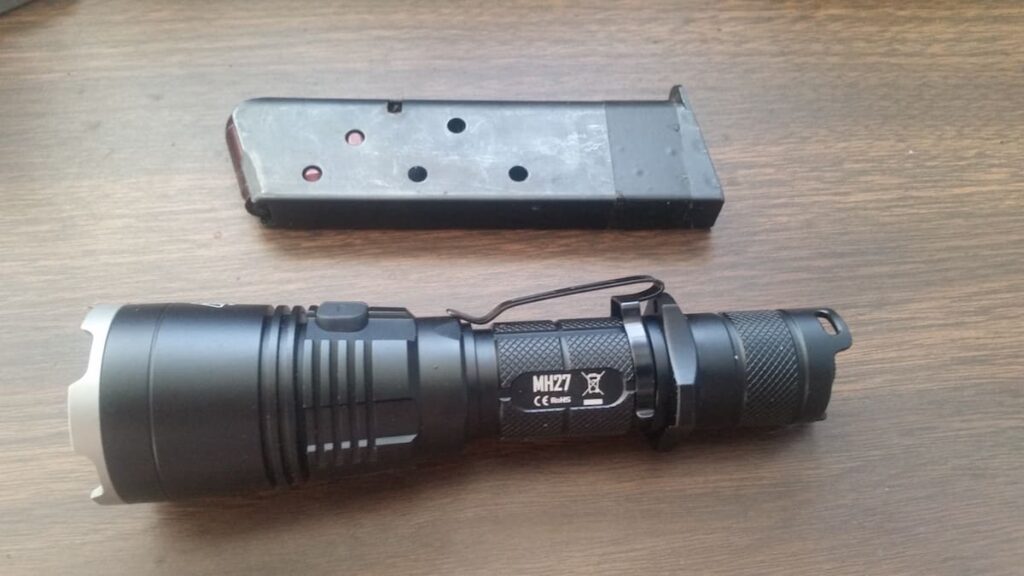 As I write this, SHOT 2017 is wrapping up and a lot of you are salivating over the latest whiz-bang tactical toys that you saw either in person or via the many folks covering the event. Some looking useful, some were pointless; we’ll talk about that in another article. For right now, I have a piece of gear that I can strongly recommend. Thanks to my friends at BestLight, I got my hands on a NiteCore MH27 LED, and I’m damned impressed.

This is a flashlight for serious use: tactical, LEO/Emergency Responder, or outdoor.  Powered by either a single rechargeable 18650 or two CR213s, the MH27 is a robust light with a host of features useful to those operating under extreme circumstances.

The first thing that grabbed me is the look and construction. This is a beautifully made light—the body is aircraft-grade aluminum and the machining and anodizing are immaculate. The controls are simple and easy to use: a tailcap for on/off, and a pair of +/- switches for toggling between modes. Here’s where the MH27 really shines, pun intended: the multiple LED setup enables varying modes of brightness with white light, and three alternate color modes: red, green, and blue. These colors are more than gimmicks: red preserves night vision, green is less visible to game animals, and the blue is close enough to ultraviolet that previously unseen details pop into view. For a hunter tracking a wounded animal in low-light conditions, this would be a godsend.

NiteCore also included some replacement parts, including extra gaskets and rubberized covers for the tail switch and other controls. I always appreciate it when companies allow for the fact that with hard use some parts will wear out eventually and spare me the trouble of ordering them separately.

Speaking of wear and tear, this thing is robust. You could likely drive a car over the body without harm—though I don’t suggest doing so intentionally—and the manufacturer says it’s waterproof up to 2 meters and impact resistant up to 1.5 meters. So don’t worry about running it through its paces during your next round of training, the light will be fine.

The only problematic feature is the bezel of the light. I say problematic because it’s neither a pro nor a con, but rather one of those features that could be either depending on the user. The bezel is large and heavy, with aggressive teeth. This allows for powerful throw and projection, and would likely do a lot of damage if the light were used as a self defense tool. However, it can make it awkward to carry depending on circumstances, so bear that in mind.

So in summation: I’m damn glad I have this light. It’s a powerful tool with multiple functions, and there have been a lot of moments in my life when I would have given a lot to carry this thing.  If you’re looking for a new EDC light or a reliable source of illumination for your gear bag, the NiteCore MH27 is definitely something to consider.