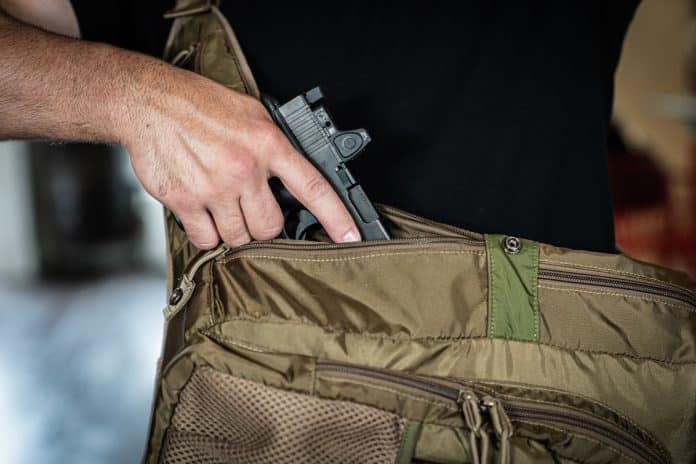 There has been an explosion of issued concealed carry permits within the past decade. There are now many millions of American’s carrying handguns. While relatively few carry on a daily basis, many carry at least occasionally. The various modes in which we can carry a handgun are utilized to a greater or lesser extent among many. And one of the more controversial options is off-body carry. This refers to carrying a gun with you, but in a manner not affixed to your person. Usually, this involves the carry of the gun in a bag, purse, or backpack. There are some benefits to this form of concealed carry for certain situations, but there are many downsides. And opting to carry off-body should be approached with reservation.

There are many products on the market that are purpose-designed to facilitate off-body carry. These usually come in the form of a backpack, bag, or purse of some kind. These items typically look no different than other such products. But usually, they have a dedicated pouch, compartment, or holster built into the interior to hold a handgun. Such products often work well for this purpose, though you can certainly off-body carry with regular bags of any kind.

However, if you utilize a backpack or purse that does not have a dedicated mechanism for a handgun, you must carry the weapon safely. The gun must be housed in a secure holster so that it cannot be inadvertently fired. Or the gun needs to be stored unhampered. Carrying the gun with an empty chamber makes it less ready for action. And the deployment of the gun will take longer. However, a chambered gun that is not secured in a proper holster is a no-go. If the gun is going to be chambered and ready, you are better off utilizing a dedicated off-body product designed to retain the gun safely.

There are some instances where off-body carry may serve a legitimate purpose. The first circumstance would be to accommodate attire that simply cannot conceal a firearm. This is quite common for women when they need to dress formally. It is also common for runners or other athletes who find it challenging to wear a gun on their person while doing such training. For some applications, there may be a need to keep the weapon off your body, like in an office setting where your dress clothes can’t accommodate the weapon. In all such circumstances, a dedicated off-body pack might be used, or a gun might be placed safely within a regular purse, briefcase, or pack.

There is the argument that having the gun with you, even if it is off-body, is better than having no gun at all. There is certainly merit to this, but you must do it right. The pack that holds the gun needs to stay attached to you to ensure safety, such as a pack that you might wear when running or hiking. In such circumstances, the pack will most often stay attached to your person, even if the gun is not.

Keeping Control of Your Gun

The most obvious problem with off-body carry is the safety concerns of having a handgun in a pack that may at some point be out of your direct control. This is why I find off-body carry solutions for the office less convincing. A work bag or briefcase is not realistically going to be under your control at all times. Likewise, purse carry poses the same issue: women usually do not hold onto their purse at all times.

Off-body carry may also appeal to people who are carrying in environments where you want to avoid detection or are subject to searches or excessive scrutiny of your person. Of course, under such conditions, a pack will usually be searched as well, or draw more attention. The gun carried in a pack may be easier to discard quickly, if need be, but we are now discussing the carry of handguns under circumstances where it is legally forbidden, which I do not suggest.

There are a number of down-sides to off-body carry. The first to consider is that an off-body gun will always take longer to deploy than a pistol worn on your person. Unless you preemptively have your hand on the hidden gun within the pack or purse. This is possible in some circumstances. Generally, in a reactive situation, you will be far behind the power curve compared to accessing a gun on your body. This may be relative to the situation. A runner with good situational awareness may have time to see a threat coming and be able to get their hand into their pack to access the gun. Someone in an office, with a hidden gun in a briefcase that is below the conference table, or worse yet, in their office while they are in the conference room, is going to be slow to access.

The second and most significant downside to off-body carry is that you are likely to have times throughout the day that the gun is not under your direct control. When analyzing the negligent discharges that happen each year, a large percent occur when unauthorized individuals access the gun in a pack or a purse. This often occurs when a child accesses a gun that is in a purse. For example, the mother turns away from the shopping cart in which her purse and child are. Then a curious child rifles through the purse and discovers the gun. Not good. If you have the discipline to have the purse slung over your shoulder at all times, fine.

Do you ALWAYS keep your purse or pack on at all times?

Realistically, I don’t know anyone who will keep their purse or pack on them at all times. And there are plenty of times when in public that doing so may raise suspicion. Therefore, the greatest downside to off-body carry remains the reality that the gun may not be under your control at all times.

In conclusion, I submit that off-body carry may serve a purpose. For example, facilitating carry for an athlete while training in the field. Outside of this, however, I urge significant caution and consideration before choosing to off-body carry. As a responsible armed citizen, it is your job to keep control of the handgun at all times. Unless the purse or pack that contains the gun is affixed to you, the gun is not under your control. Proceed with caution.