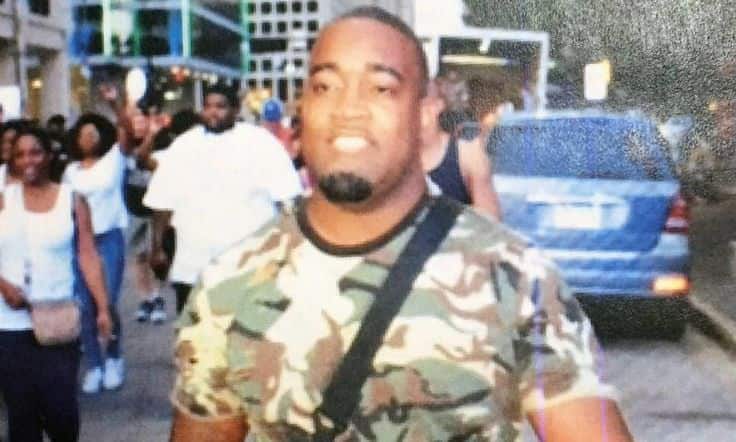 Shortly after shots rang out in Dallas at a Black Lives Matter protest, Mark Hughes found himself in a precarious situation.

Hughes was openly carrying a rifle at the protest, an act which is perfectly legal in Texas. But as the confusion and pandemonium of the situation spread, photos of Hughes began showing up on social media.

The Dallas Police Department tweeted a photo of Hughes dressed in camo and shorts, describing him as a suspect and asking the public for help in locating him. Later Dallas Police Chief David Brown described Hughes as “a person of interest who witnesses at the scene say was involved in the shooting.”

Hughes surrendered his rifle and turned himself in to the police when he found that he was a person of interest.

After the shooting started Hughes’ brother, Cory, told him “’Give your gun to this cop because we don’t want an accident. We don’t want them to come around the corner and see you with a gun and start shooting at you,’” Cory Hughes told CBS 11.

Police detained Hughes and questioned him for about 30 minutes before finding he was not involved.

Hughes now claims he was “defamed” by the police and that he has received thousands of death threats over Facebook.

However, Hughes was not the only open carry advocate arrested in the wake of the shootings; one other man and a woman who was with him were also detained, which led to early reports that there were multiple shooters. The other man was not allowed to legally carry a firearm and was arrested on a misdemeanor charge while the woman was later released. An estimated twenty to 30 people also openly carried rifles at the protest.

After the actual shooter, 25-year-old Micah Johnson, was killed, the police and even President Obama found time to question the efforts of the open carry advocates.

“Imagine if you’re a police officer and you’re trying to sort out who is shooting at you and there are a bunch of people who have got guns on them,” Obama said on Saturday.

“Someone is shooting at you from a perched position, and people are running with AR-15s and camo gear and gas masks and bulletproof vests, they are suspects, until we eliminate that,” Brown continued. “Doesn’t make sense to us, but that’s their right in Texas,” he said.

C. J. Grisham, the founder and president of Open Carry Texas, disputed the claims of President Obama and Chief Brown, saying that in videos of the shooting, “you can see that police are walking right past people who are open-carrying rifles and it’s not a problem. So obviously it’s not that difficult to tell who the good guys and the bad guys are.”

Regardless of the law, openly carrying a rifle in public can lead to some sticky situations. Always remember to be respectful and compliant to law enforcement officers.

Do you think it was wise for open carry advocates to carry rifles at the Black Lives Matter protest?