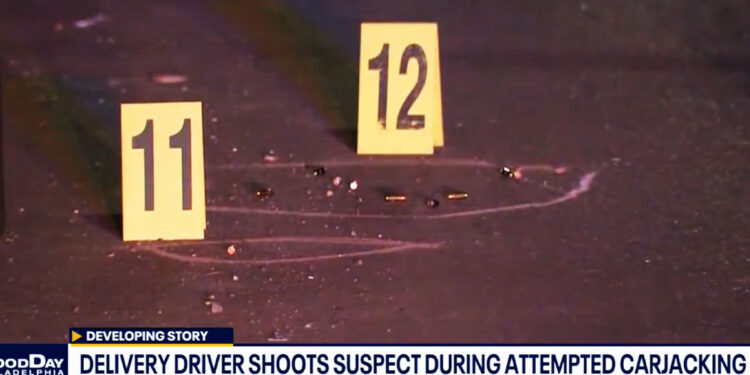 Delivery drivers are out there trying to make a living. But they are driving vehicles that are worth money which is why there have been numerous carjackings as of late in Philadelphia. Well, this carjacker got more than he bargained for when he tried to steal a pizza delivery driver’s car.

The delivery driver drew his concealed carry gun and shot multiple times at the suspect. It is unclear how many times the suspect was hit, but he was taken to the hospital and is in critical condition.

Delivering food can be a dangerous job. You are driving around to random places people random people. You are driving around in a valuable vehicle. You’re also usually carrying around cash. We’ve covered stories where food drivers have been set up for robberies. The only way to protect yourself is to carry a gun. And hopefully, your employer allows it.

Wife Hit During an Exchange of Gunfire Between Intruder and Homeowner; Police Find Suspect Hiding Inside Home

Wife Hit During an Exchange of Gunfire Between Intruder and Homeowner; Police Find Suspect Hiding Inside Home

If the (assumed company owned) vehicles are THAT valuable, I would bet they are outfitted with a device that can remotely disable them within minutes, making them much less valuable unless the thiefs have a way to tow them. Perhaps some are also outfitted with valid employee face identification tech required to start and/or continue driving the vehicle for more than say, 5 minutes. (note: disabling system would produce an alert before disabling the vehicle giving any valid employee still driving, some time to drive the vehicle to a safe location (e.g. a populated parking lot, gas station, etc). It could even automatically call a security service or the pizza company so they could as needed call police, etc)

They would also have GPS locator capability so police could be vectored to the vehicle as fast as a given city’s police respond.

The perp is in critical condition? Dang. Needs to be dead.