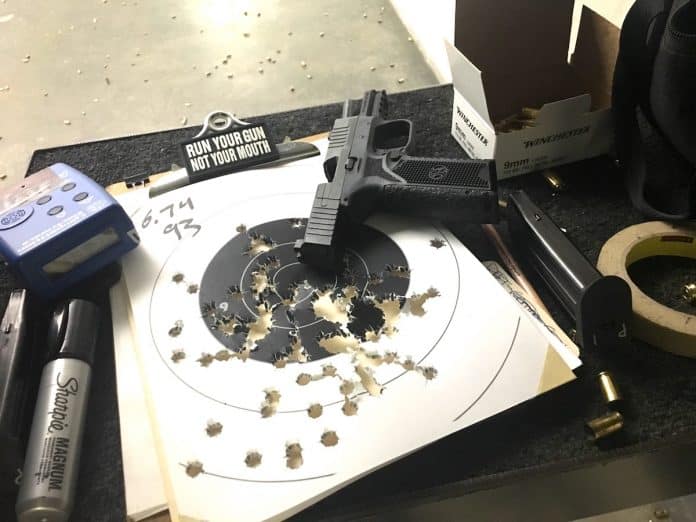 Depending on where you live, indoor ranges might be the most readily available shooting option available. In my neck of the woods, unless you join a private gun club or own a large chunk of land somewhere, indoor ranges are basically all that there is. Using an indoor range can sometimes present interesting challenges due to more stringent rules above and beyond the typical firearms safety rules. While I understand why those rules are there, it really can be frustrating for the people who have the training background and experience to be able to do things like drawing a handgun safely, but they get lumped in with everyone else anyway.

When limited to restrictive ranges, dry fire is where the game is at for working any manipulation of the handgun like the draw stroke, reloads, et al. It isn’t quite as fun, but you can make a lot of progress with a good dry fire routine. When we do hit the range, our goal should be to confirm the skill we have tried to build in our dry fire and to practice the skill areas that we cannot in dry fire, like recoil management.

Every range session should start with a cold drill. This is a drill that is shot and scored with zero warmups. It is the accurate indicator of our skill. The Test, or the 10-10-10 checks a lot of the boxes that we need it to. It is a long string of fire to test our recoil management, confirms our trigger press and sight work we have done in dry fire, and you can easily track it over time. It requires a B-8 target (there are plenty of printable versions available online), ten rounds, and a shot timer.

If you don’t have an actual shot timer, there are a few apps for smartphones that will work well enough to run PAR times. Those apps tend to not do well at actually tracking shot times, so just listen for the start and stop beeps. Place the target at ten yards, and you have ten seconds to fire your ten rounds for a score on the B-8. Passing is considered 90 points or better within the PAR.

While we may not be able to work an actual draw stroke, we can work some of a draw stroke. The last half of the draw stroke, from when the hands meet at the gun to when the shot breaks, can typically be worked on a range that does not allow drawing from a holster. We can apply a PAR time to this one as well, and progress the drill by increasing the number of rounds fired per repetition. This is, in essence, a modified version of the late Todd Green’s Accelerator drill. We can use the same B-8 as we did for the 10-10-10, by moving to seven yards, and now the goal is just to get the hit somewhere on the target. First five reps are one round each, with a one second PAR.

We are working on the back half of the draw stroke, so we should start from a high compressed ready, about where the hands would normally meet during the draw stroke. Present the gun to the target along the eye-target line, picking up the sights on the way and break the shot as the gun reaches full extension. One round in one second should be a doable thing for most people. After those five reps, we keep the same PAR but each rep is two rounds now and we do five more repetitions.

The goal is to work on picking the sights up quickly and really starting to manage the gun. After those five reps we step it up one more time, and go to three rounds per repetition, still with the same one second PAR. Again, we are pushing our recoil management skills, ability to get on the sights quickly, and press the trigger well enough at speed to get a reasonable hit.

Like the 10-10-10, another staple in the firearms training world is the Half & Half. The brainchild of Kyle Lamb of Viking Tactics, this is actually intended as a carbine drill and meant to be shot on a USPSA A-zone.

We are going to increase our target size a bit by using the same B-8 as before with the goal of just keeping the hits on paper, and shoot it with a pistol. One of our primary training points, when we do our live fire, should be to work the skill areas we cannot work on in dry fire practice, one of the most critical being recoil management.

This is another drill with long ten round strings of fire and PAR times. The drill starts with the target at 20 yards and calls for ten rounds in ten seconds starting from a ready position. The goal is to make PAR and not miss, emphasis on the not miss part. The second string of fire halves the distance and halves the time, but keeps the same round count, so ten rounds at ten yards in five seconds. The third string halves the distance and time again and maintains the same round count. The final string of fire is where we really start to see if our recoil management skills and trigger manipulation are where they need to be.

We have worked our ability to manage the sights, trigger, and recoil at various distances. All that is left is to work the same set of skills with one hand. The next drill is called a progression drill, and something that Mike Seeklander uses a lot in his classes. It is intended to help prevent getting into the habit of always shooting a set number of rounds per repetition.

The way it works is that the number of rounds fired progress with each repetition. In this case, we are going to do five repetitions.

On the first rep, we only fire one round. On the second rep two rounds. And on the third rep three rounds. You get the idea.

Once we do five reps using our strong hand only, we start over and repeat the drill using our weak hand only. There is not a PAR time for this drill. The idea is work on running the gun faster. So we should be shooting as fast as we can while still maintaining our hits on our target at five yards.

There we have it, a 100 round practice session intended for use on indoor ranges with restrictive range rules. We have checked our skill cold with a drill we can use over time to track performance. Next, we have worked on the second half of our presentation and building speed. After that, we worked our speed at a distance with the Half & Half. And lastly, we have worked our recoil, sight, and trigger management weak hand only and strong hand only. It costs us a range fee and 100 rounds of whatever flavor ammo we like best. And it only took about 20 minutes of our time.

Give it a try, and let me know what you think in the comments.