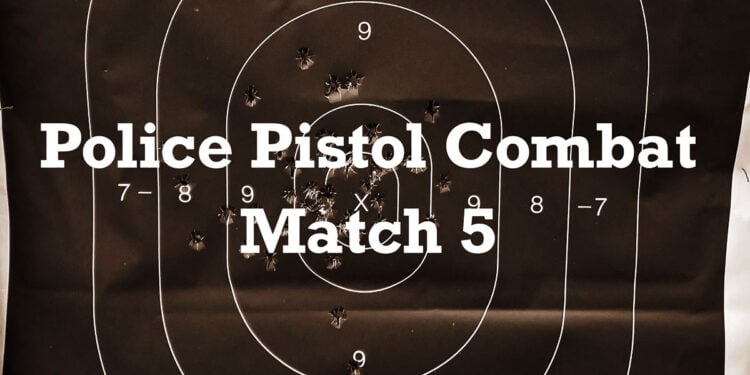 What is now called NRA Police Pistol Combat (PPC) matches are the competitive shooting modality of yesteryear. Its predecessor was created in the late ’50s, and the NRA’s involvement with PPC started in the early ’60s. Jim Cirillo of the famed NYPD Stakeout Squad was a PPC national champion. In the ’70s and 80s, PPC was the “combat shooting sport”, but it was eventually supplanted by the action pistol sports like IPSC/USPSA and IDPA.

Believe it or not, though, PPC continues on as one of the NRA’s Law Enforcement programs. Unfortunately, to participate in official NRA PPC matches, you have to be a law enforcement officer of some type. Since all of the “matches” or courses of fire used in PPC matches are standardized, though, we can at least shoot the same course of fire and see how we stack up. It may not be the most practical form of shooting, but it is a skill challenge and a pretty lofty one for most people.

Which Course of Fire?

There are several PPC “matches” or prescribed courses of fire. Match 5 (or Match 12 if shooting semi-autos) is the longest course of fire at 60 rounds fired over 4 strings of fire. It is also the most difficult, with timed strings out to 50 yards. It is really the meat of PPC, so of course, the one everyone needs to try.

In an actual PPC match, there is not a “passing” standard associated with the various courses of fire, it is just whoever scores the most points wins. In the event of a tie, the X count is used as the tie-breaker. Looking for some sort of scoring standard, I learned that police officers in Oklahoma wanting to be certified as firearms instructors have to shoot the Match 5 course of fire and score 80% (540) to pass. Sounds good enough to me. That is what we will deem a “passing” score.

How Hard Can It Be, Really?

While certainly dated, this is actually a fairly difficult marksmanship challenge. The 10 ring on a B-27 is about the size of a 3”x5” index card. The 9 ring is about the size of a piece of 8.5”x11” printer paper. Over 1/3 of all the rounds fired are from the 50 yard line. Hitting a piece of printer paper from 50 yards, even with only moderate time pressure, is something very few of us practice or have much exposure to. In reality, the same is probably true for the 25 yard shots as well. There is only a small subset of defensive shooters who spend much time working a reasonable accuracy standard at 25 yards.

Next time out to the range, be brave, tackle a challenge that has been around for over ¾ of a century. Then let us know how you do in the comments.