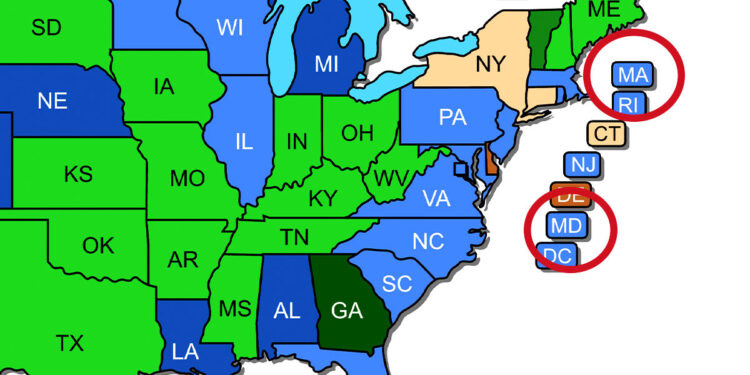 Two more states are now Shall Issue after they released statements removing the ‘Good Cause’ standard when reviewing concealed carry permit applications. We have updated our Concealed Carry Maps accordingly and will do so as other May Issue states address how the Supreme Court ruling affects their state.

“Over the course of my administration, I have consistently supported the right of law-abiding citizens to own and carry firearms, while enacting responsible and common sense measures to keep guns out of the hands of criminals and the mentally ill.

“Last month, the U.S. Supreme Court struck down a provision in New York law pertaining to handgun permitting that is virtually indistinguishable from Maryland law. In light of the ruling and to ensure compliance with the Constitution, I am directing the Maryland State Police to immediately suspend utilization of the ‘good and substantial reason’ standard when reviewing applications for Wear and Carry Permits. It would be unconstitutional to continue enforcing this provision in state law. There is no impact on other permitting requirements and protocols.

“Today’s action is in line with actions taken in other states in response to the recent ruling.”

After the Supreme Court’s Decision in New York State Rifle & Pistol Association v. Bruen The Attorney General’s Office and the Executive Office of Public Safety and Security issue this joint advisory to provide guidance to licensing authorities and law enforcement officials on how the Supreme Court’s decision in Bruen affects Massachusetts’s firearms licensing laws. We are proud to continue to partner with you in implementing and vigorously enforcing Massachusetts’s gun safety laws. These laws help keep our state a safe place to live, raise families, work, and visit.

On June 23, 2022, the United States Supreme Court issued its decision in New York State Rifle & Pistol Association v. Bruen. The case involved New York’s requirement that applicants demonstrate “proper cause” in order to obtain a permit to carry a concealed weapon in most public places. The Court held that New York’s proper cause requirement violates the Second and Fourteenth Amendments. Although Bruen concerned a New York law, the Court specifically identified the “good reason” provision of a Massachusetts law, G.L. c. 140, § 131(d), as an analogue to New York’s proper cause requirement.

Licensing authorities should cease enforcement of the “good reason” provision of the license-to-carry statute in response to Bruen. Authorities should no longer deny, or impose restrictions on, a license to carry because the applicant lacks a sufficiently good reason to carry a firearm. An applicant who is neither a “prohibited person” or “unsuitable” must be issued an unrestricted license to carry.