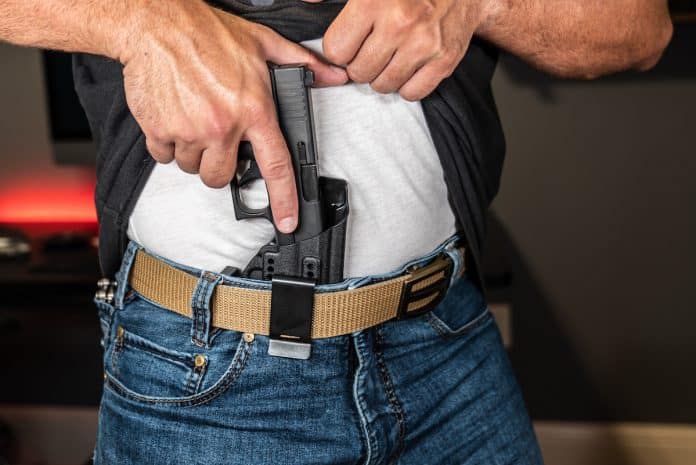 An essential skill for using a handgun in a defensive capacity is a fast, safe, and efficient draw stroke. While fast is good, having a draw that is predictable and consistent is equally, if not more, important. However, most of us get preoccupied with the standard draw that we most often conduct while on the range, typically to a two-handed grip in an ideal shooting stance. This is the foundation of our skill, but it is hardly the only draw stroke that factors into the overall skillset of the concealed handgun. In fact, if you surveil any amount of video captured gunfights, such a perfect draw stroke rarely materializes.

If unfortunate enough to need to deploy your concealed handgun on any given day, the chances of being able to do so the way you do on the range, under ideal conditions, is unlikely. If we consider the factors that can influence our environment and circumstances, it becomes obvious that being able to access the gun under many such conditions is important. I propose that there are at least four basic draw strokes that we need to know in order to deploy the gun under these conditions, and there are possible variations on each of these four that should be practiced and considered. Bear in mind, this only refers to drawing your gun from a primary carry mode on your waistband, so if you carry in other body locations, your draw requirements will increase. What are these four draw strokes?

The vast majority of those who carry a gun spend little time practicing to deploy the pistol from concealment. Those who do practice this skill typically only focus on the default draw, as is done on the range. Standing in our shooting stance, we draw the pistol to a two-handed grip. Obviously, if able to do this draw during a defensive situation, then do so. Many people utilize both hands to clear the cover garment and access the gun, so the default draw relies on both hands to access the pistol. Obviously, the modern shooting technique relies on utilizing both hands to maximize speed and accuracy. This default draw should indeed be practiced extensively, but it is only one of the potentially needed draw skills.

The next critical draw stroke to practice to proficiency is one that relies on only one hand. There are many reasons to practice drawing with your dominant hand only. If an assault befalls you suddenly, there is no telling what you may be doing at the time. Perhaps you have a young child in your arms, perhaps you are holding onto someone or something that you cannot release. Maybe your support hand is occupied fighting off a contact distance threat, or maybe it is injured and rendered useless. Being able to access the gun with your dominant hand only, and deploy the gun and fire with dominant hand only, is a critical skill.

Depending on your carry position and typical draw stroke technique, your single-hand method may be similar, or quite different. Generally, you will find that going to a single-hand draw when you typically use your support hand to clear the garment will slow you down. The most important thing is to develop a consistent and safe method for drawing the gun with only one hand.

An expansion on this single hand draw stroke is what might be termed a “combative draw stroke.” This refers to your method for deploying the gun while in a contact distance struggle with an opponent. Obviously, that is a skillset in and of itself which is outside of the scope of this article. But a combative draw stroke will rely on the technique involved in your single-handed deployment of the gun.

The primary point of concern here is to train this support hand only draw stroke safely. When accessing the gun with your support hand, the gun typically needs to be turned around to facilitate a firing grip. There are techniques for doing this, such as placing it between your knees so that you can re-grab the gun, or spinning it on the holster and against the body. You should only learn to do this under the direction of a good instructor and then start only with dry fire until you can do it consistently and safely. While doing this with live fire a few times under instruction is good, this is a technique that is best practiced dry.

Another variation of the draw stroke that is rarely practiced, yet utilized quite often in the real world, is a surreptitious draw. This refers to drawing the gun discreetly and getting it into your hand without a present threat noticing. This might be a foreign concept to many but think of scenarios in which a threat might be in the vicinity, such as an armed robbery. If you think things will turn violent, you might have the option of drawing the gun so that it is in hand without the threat noticing.

As you can see, practicing the draw goes far beyond just working on your default draw stroke that you use on the range under ideal conditions. These four variations on this skill are important, and all demand some attention and repetition.