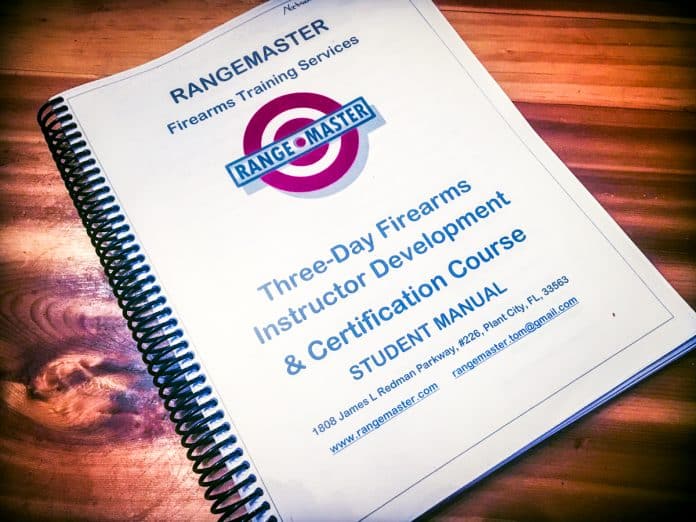 Several decades ago, Tom Givens started up a place called Rangemaster in Memphis, TN. It isn’t a secret to most people. But just in case, Memphis likely does not qualify for the “most peaceful city in the south” award. Not by a long shot. In that environment, Tom refined what Rangemaster was, and over several decades developed his brand into what it is now. Rangemaster, the place, was closed several years ago. Tom then took his show on the road having retired from a long career in law enforcement. He is now one of the premier instructors on the national circuit. And one of the very few that offers instructor development training with this Rangemaster Instructor Development Course.

The Rangemaster Instructor Development Course is a 3-day program, crammed with five days of information and learning. The course is information dense, and the underskilled or inexperienced is not likely to fair well. Boondocks Firearms Training Academy hosted the course I was able to attend in Clinton, MS. The facility is amazingly well put together and intended to be strictly a firearms training facility. The classroom area was very nice. The live fire range we used was equally wonderful. It is essentially an outdoor range with a roof over all but the 25-yard line. That came in handy on the last day of the class when it decided to rain on us.

Day one started in the classroom with Tom giving his intro, and explaining why he teaches an instructor development class. It is important to understand where Tom is coming from, and why he thinks this is important. That gives some insight into why he maintains the standards that he does. There has been a shift in recent years in firearms purchasers. In the past, consumers purchased firearms for sporting or hobby purposes. But more recently they have been purchased for self-defense according to survey data collected by the NSSF. Add to that an incredible influx of new gun buyers. That leaves a large segment of the gun-owning public that has little clue about how to safely handle a firearm. Much less effectively. Those are the people that need competent instructors.

Tom’s purpose with his instructor development course work is to produce the best instructors possible. People who are truly subject matter experts in the how-and-why of defensive handgun shooting. And also have the understanding and ability to transfer that knowledge to another person effectively.

Safety Was Covered First but Also on How to Teach Safety

We had 17 students in this class. It was a balanced mix of experience levels. And all mostly civilian firearms instructors who teach either as a primary or secondary source of income. The first lecture of the class is what any reputable firearms related class covers at the beginning – Safety. Tom offers his perspective on four core firearm safety rules, how to best implement them, and how to teach them. The rules themselves should not be new information for anyone in any firearms related class. Especially one touted as an instructor level class. The real value here is Tom’s perspective on how to best teach the rules.

Rangemaster staff has had over 48,000 students in classes, and not one serious firearm safety-related incident. That is pretty good evidence that Tom knows how to manage the safety of a class effectively. Being taught how to teach started here, and it didn’t end until class dismissed on day three.

Once firearms safety was thoroughly covered, Tom got into what makes a good defensive handgun. He also covered the different types of handguns that students commonly bring to classes. One of the more interesting parts of this class was Tom’s historical perspective. Both in terms of handgun design evolution and shooting technique evolution, and how the two sort of mesh together. This perspective is especially useful when Tom starts getting into shooting technique. People who have been around competent instruction before will be familiar with the techniques that Tom teaches. There are only so many ways to shoot a gun.

And generally speaking most people actually concerned with sound shooting technique are shooting guns in remarkably similar ways. Again, what makes Tom’s lecture on technique interesting is the historical background he provides. He explains why something is the way it is. And then he discusses how to best teach it to other shooters. After all, this is an instructor development class. The goal of most people in the class is probably not going to be becoming a better shooter. Although that is likely a byproduct of this class. Ultimately, you want to learn how to better teach people to be better shooters.

Day One is Over

The classroom portion for day one wrapped up mid-afternoon. It covered:

That last part is important. Different students paired up over the three days of class. We coached each other when shooting drills or qualifications. If there is a technique issue, be sure to point it out. Try to offer a solution, and then coach them through the correction process. Throughout the three day course, I paired up with five different people. Training with different students serves to improve our shooting and to exercise our ability to coach other shooters. In this specific case, the vast majority of the students in the class were outstanding shooters. So coaching becomes even a harder task with the errors are smaller and much less noticeable. The first day we spent about three hours on the range. We fired around 250 rounds working fundamental skills at relatively close ranges. The class wrapped for the first day right at 6:00 pm as advertised.

This course I took was my first exposure to Rangemaster and Tom Givens in an actual class. From the start, I realized the weight associated with instructing. That is because Tom understands the gravity of teaching people to defend themselves with a firearm. There are no second chances, and there is no room for a mistake. Tom makes that very clear and takes his instructor development course work very seriously. I received the message loud and clear. I attended this course to work and get business done. And that is precisely how it went.