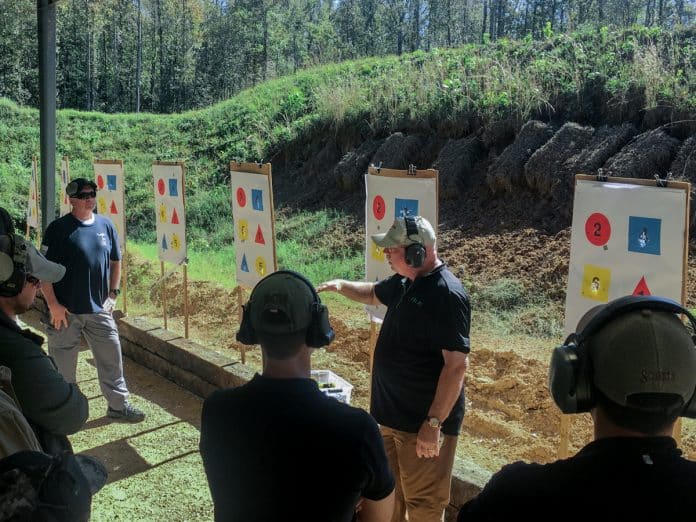 Day One of the Rangemaster Instructor Development course set a very clear tone, all business. You can read about that more in Part 1 of this review of Tom Givens’s Course. Day Two carried that forward on the range with a solid six hours of work. We put nearly 500 rounds put downrange before heading back to the classroom for a couple of hours at the end of the day. The primary focus of the day was working critical skills in that three-yard to seven-yard window where typical self-defense shootings tend to take place. An appropriate amount of distance shooting was mixed in, as well as decision making/target identification.

Tom introduced low and moderate levels of stress with an introduction to testing and using scored drills to assess student progress with the Rangemaster Bullseye Course and the current FBI handgun qualification course. The FBI qualification is one of the courses of fire that must be passed at 90 percent to receive a certificate at the end of the three-day program. Tom used the run at the FBI Qualification on day two for benchmarking and for making sure that students were about where they needed to be in terms of shooting skill. The scored runs for record would be conducted on the final day of the class.

The purpose behind testing, apart from documenting skill level, is to provide some measure of pressure testing and assuming student success, confidence building. Applying a pass/fail set of criteria (minimum score, time limit, accuracy standard), and requiring people to shoot it and succeed or suffer a consequence is a great way to apply some stress. Another side of that same coin is to make people shoot one at a time in front of their peers, on a similarly timed and scored drill. This brings all of the focus onto that one person. It forces people to shoot to their skill level and succeed, or the pressure overcomes them, and they look like an idiot in front of the class.

It is akin to public speaking, except we are shooting guns. No one wants to be the slowest, or be the only guy or gal to miss the target or screw up the course of fire. Even more so, there is no class where that is truer than in an instructor development class full of people who presumably know what they are doing. The drill that Tom uses for this is his Casino Drill. It requires a set of targets to be shot in a specific order, a specific number of times and throws in a couple reloads just for good measure. It is a fun, but challenging drill.

To give an idea of how close the skill levels were in this class among the students, several people were all within a quarter second of the winning time. The difference between the winner and 2nd place was only 1/100th of a second. The class winner gets a cool challenge coin noting their success, but that really isn’t the point. Throughout this entire process, Tom is teaching us how to apply pressure to our students and explaining why we should be applying pressure. He is, in essence, demonstrating to us how to teach. 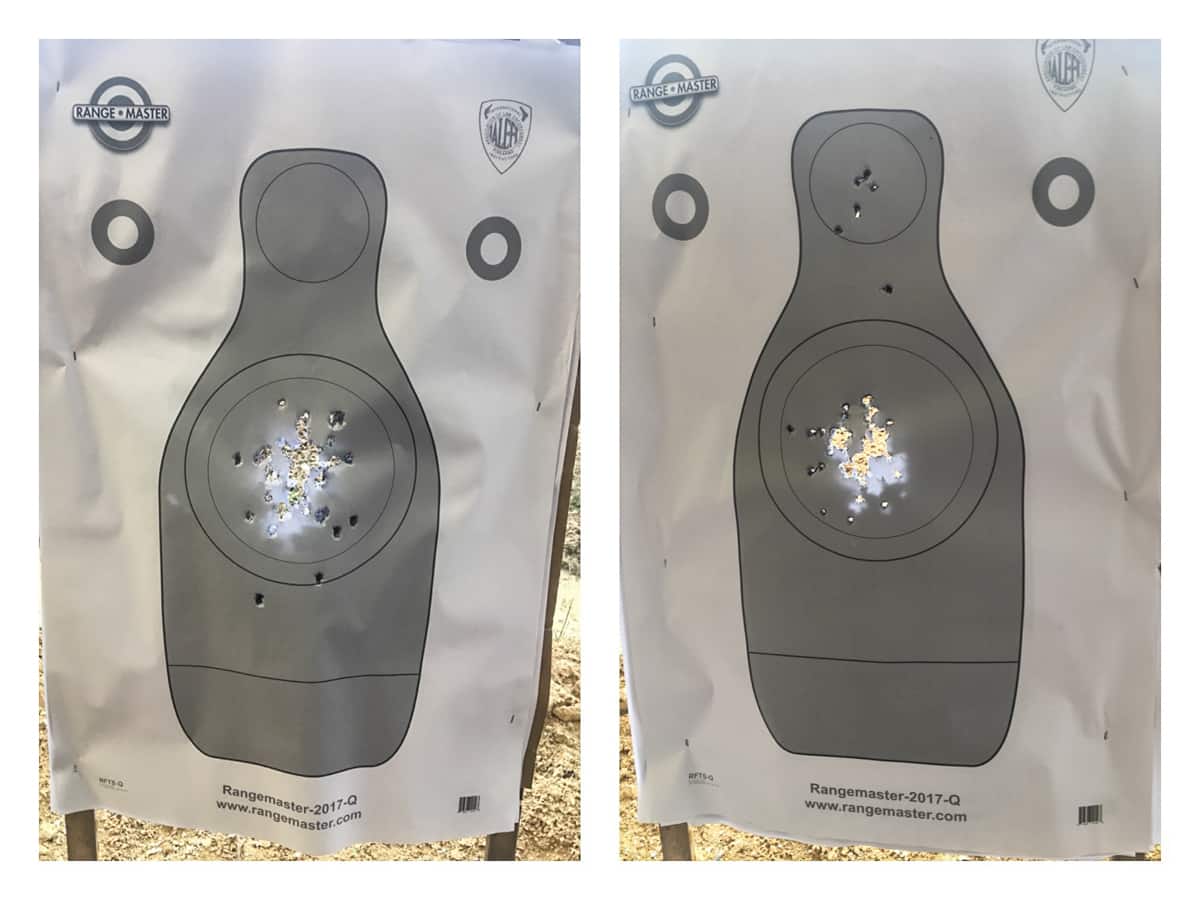 The accuracy standard is much higher on the Rangemaster qualification, and the rounds fired distribution is much closer to what might be seen in real life, mirroring statistics of actual shooting incidents. These qualifications are Tom’s way of confirming that the people getting certificates from his instructor development course actually know how to shoot a gun. The scores are recorded and included on the student’s certificate at the end of the class.

After qualifications, it is back in the classroom for two of the most important lectures of the entire class in my view. First was a lecture on identifying the threat to civilian self-defenders. And the second lecture was on the legal use of force. To correctly identify the threat, we must understand our own biases, work to get around them, and source relevant research to properly form our opinions. I found this to be a particularly interesting block of instruction. The usual sources of information that most use to back up their claims are not always the best sources. They are subject to flaws in voluntary reporting, or biases associated with political pressure to project a specific picture to the public.

Tom uses very carefully sourced statistics to very clearly define the common threat encountered by the civilian self-defender. Throughout the course, Tom repeatedly made that point that the hardest part of any defensive firearms instructor’s job is convincing people that they need to carry a gun on their person, all the time. This is the part of the class where he gave us the tools we need as instructors to make that case.

The last block of instruction for the class covers the legal use of force. This is an area where many people have a poor understanding of what is actually required to justify the use of force, and how to articulate the use of force properly. I would rank this part of the class as easily one of the most important. Tom does an outstanding job making what is generally considered a complex subject understandable to the average person. At the end of the day, if you are a defensive firearms instructor an understanding of basic legal principles is critical to the success of your students.

The final exercise of the class is a reasonably comprehensive written test. According to Tom, this is where they see the highest number of failures in the class. At the beginning of day one of the class, students are provided a nearly 200-page student manual. We were instructed to study the manual after class each day. Just like the firearms qualifications, the written test must be passed at 90% or better. It is not a test that can be passed without significant study time. Prospective students be warned. I don’t think Tom was lying when he said they see more failures on the written test than any other part of the class.

This was my first in-person exposure to Tom Givens or Rangemaster. Based on what I had heard and read, I expected this class to be good. However, the class I experienced was exceptional. It exceeded my expectations in terms of quality of the information, and the quality of the instruction received. I picked up a few tidbits on the range. But the classroom is where I personally found most of the value. By my calculation, we spent almost exactly 12 hours in the classroom. 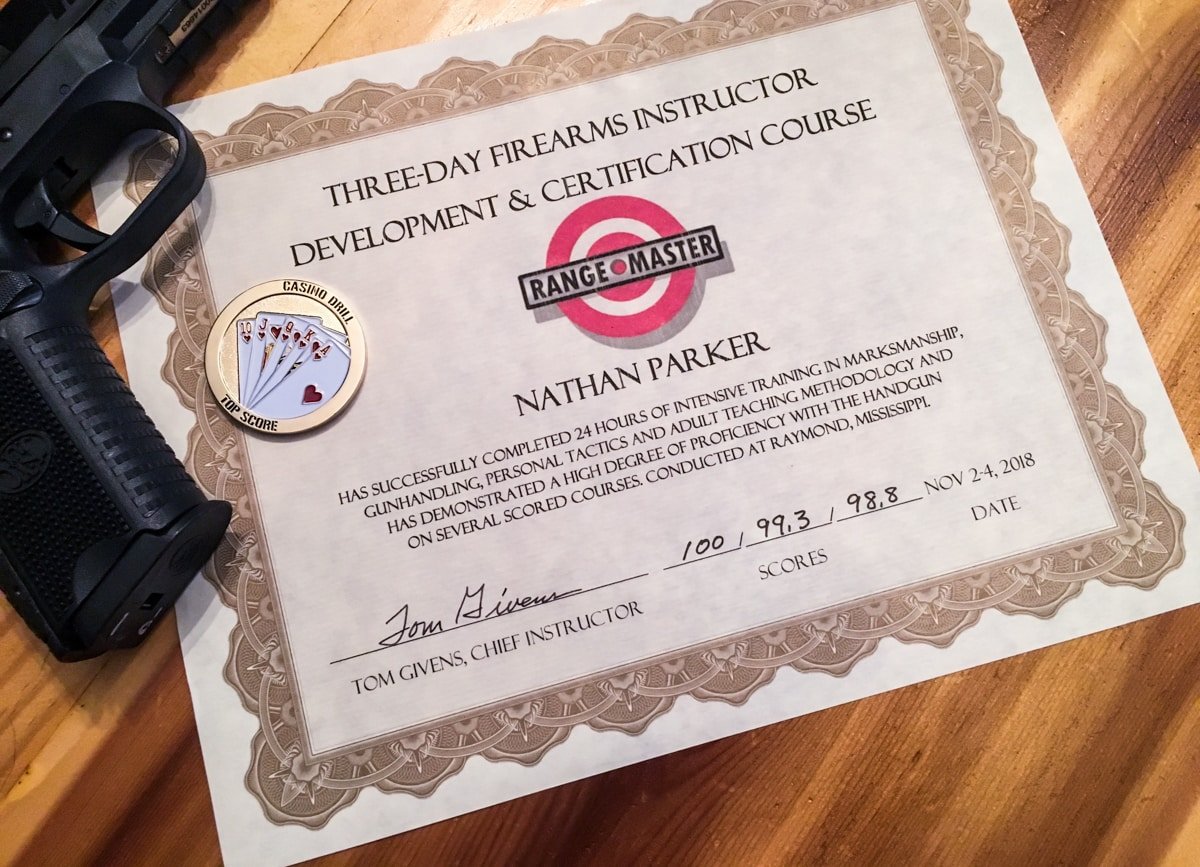 For those 12 hours, I came away with over 30 pages of notes. The density of the information is incredible. That also brings me to another point, the pace of the class. I have been in more than a few classes, including other instructor development classes. Tom’s Instructor Development class has by far been the quickest paced class I have taken. There is minimal downtime anywhere in the course. If you decide to take a Tom Givens class, be sure you come ready to work. Between the relatively high testing standards and the pace of the course, he allows nothing less.

For more information on Tom Givens and his courses visit Rangemaster.