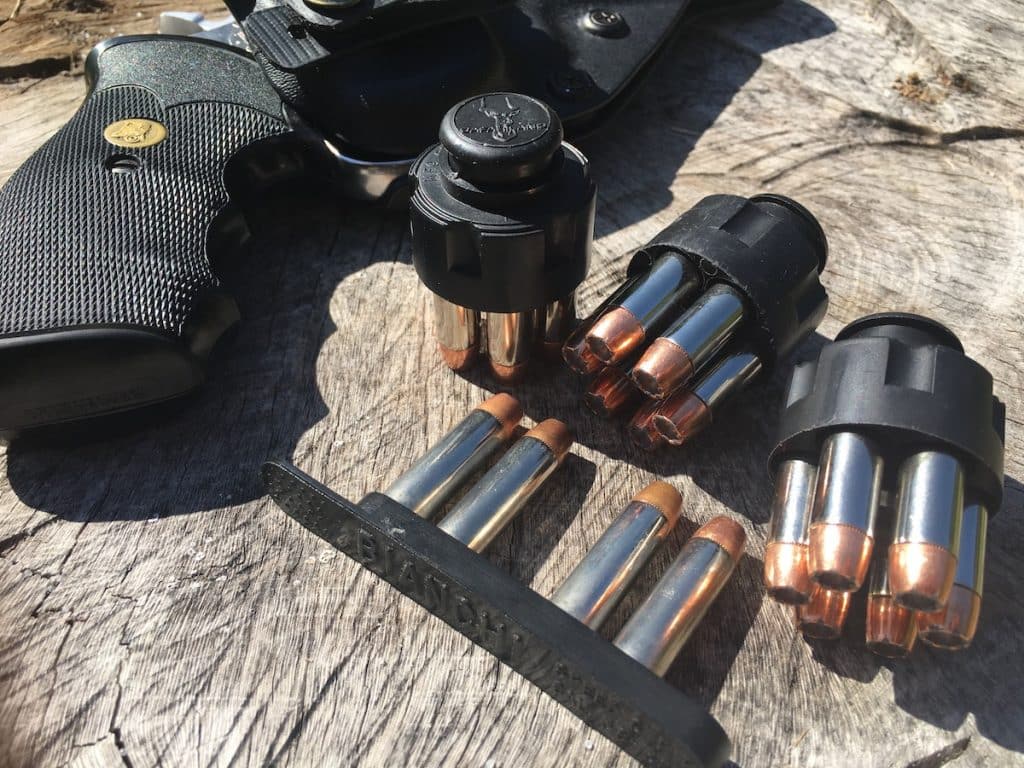 You can reload revolvers numerous ways. I can think of at least a handful of variations off the top of my head. This article is not about the best way to reload a revolver; it is merely one take on it, and why I use the method I do. Over the past several months, while trying to learn how to squeeze what performance I can out of the revolver, I have experimented with a few reloading methods trying to find the best one for me. In the process, I developed a list of criteria for what I wanted out of a reload technique.

I hesitate to use the word fast with a revolver. Comparatively, revolver reloads are not fast except for a couple of particular instances, like if I were Jerry Miculek, which I am not. However, I still need the reload to be efficient and as timely as possible.

Compatible with both speedloaders and speed strips.

Reloading with a speedloader is reasonably easy. There are not many techniques that do not work well with speedloaders. Speed strips can be a bit different though because of how they are used loading two rounds at a time, and I may need to retain a speed strip mid-reload and get back to shooting.

The reload has to work and be as fumble free as I can make it. Revolver reloads are inherently complex, and if at all possible, I don’t want to add any complexity if I don’t have to.

Based on that list, I settled on the method that was heavily influenced by Michael de Bethencourt and his technique for reloading a snubnose revolver, coupled with what is seen in use by many competitive revolver shooters. I open the cylinder with the same technique as Michael, using the support hand thumb to activate the cylinder release and the shooting hand index finger to push the cylinder out of the frame of the revolver. The index finger will maintain contact with the cylinder throughout the loading process, and I lift the shooting hand thumb to be placed on the back of the hammer. Unlike Michael, and more like the action revolver guys, I do not lift the revolver as much. I elevate the muzzle quickly while keeping the gun center line of my body, hit the ejector rod, and drive on. So far this has not caused any issues with the ejection of the empty cases, but I am using a “service sized” revolver with a full-length ejector rod. Mileage may vary on smaller revolvers with shorter ejector rods.

Once all of the empty cases have been extracted, I rotate the gun, so the muzzle is pointed at the ground to facilitate loading new cartridges with either a speedloader or speed strip with the non-dominant hand. Traditionally, the revolver would be transitioned to the non-dominant hand and the loading task accomplished with the more dexterous hand. The general logic is that the dexterity of the primary hand facilitates the loading process. Personally, I found it to be inconsequential in terms of reliability, and nearly one second slower on average if I switched hands. I also think that changing which hand the gun is in introduces the potential for a failure point. Often on the draw, one of the primary failings is not acquiring a proper master grip on the firearm before drawing from the holster. Switching which hand is holding the gun introduces that same potential for failure by requiring the gun to be regripped before shooting can start back after the reload. Others, however, may not get the same results, so if you are looking for a reloading method that is as quick and reliable as you can manage, I would suggest giving both methods an earnest try.

Once reloaded, the cylinder is closed with the support hand, and back to work I go.

Again, this is but one way to reload a revolver and the method that I have found to be the quickest and most reliable for me personally. Give it a try, experiment with it, and see how it works for you. If you use another reloading method or have some specific variation, let me know in the comments. I am always looking for something better, and maybe I will like your method a little more.