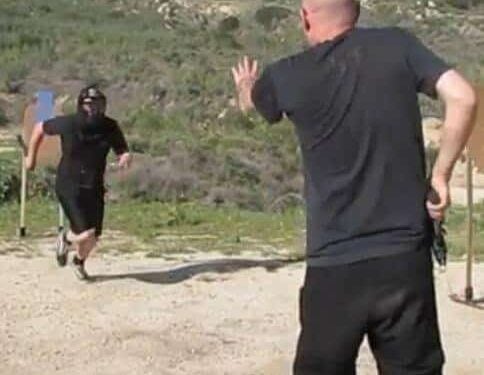 Several of the fastest wide receivers and running backs in the National Football League can run 120 feet (40-yard dash) between 4.24 and 4.27 seconds. It is well-documented that many football players can run 120 feet in about 4.5 seconds. Football players at most positions and average-fit people can run about 20 feet in about 1.5 seconds or slightly less. This seems almost unbelievable, but it is true. So can some “bad guys.” So, is the 21-Foot Rule a sufficient guideline for deciding at what point and when to draw, present, and use your defensive gun before being overcome by the “bad guy?” Is it a safe distance for adequate reaction time to stop the threat? Some think so and some think not. Some think it should be a 30-Foot Rule and some jurisdictions have changed to it, e.g. certain jurisdictions in Texas, Georgia, Florida, and others.

This month I attended two NRA advanced and intermediate-level concealed carry courses near Atlanta, GA, Personal Protection Outside the Home. One of the instructors, a middle-aged female (average build & physical fitness), guided me in a 7-yard special drill. At the range, we were positioned back-to-back and she had her hand on my shoulder. I was the “good guy” and she was the “bad gal.” When she removed her hand from my shoulder, I was to unholster my gun from beneath my concealment shirt and fire 2 non-sighted shots at the target in front of me down range at 21 feet, while she (as the attacker) ran in the opposite direction up range. She stopped as my first shot was fired. As the good-guy shooter, I was successful only if one of my shots hit someplace in center-mass target and if she as the bad-gal runner did not cover 21 feet. Time is a very important personal-protection variable. We don’t want a “tie” with the attacker and defender in terms of time. The defender needs to win the time race. No excuses for this keyboard commando, but I tried to be quick and she covered about 24 feet before I accessed my concealed gun, drew it, and fired my two rapid shots. Both my shots hit center mass, but it took me too long to do it. In reality, I would be severly injured or dead, especially if the attacker was a lean and fit 25-year-old. This really hit home for me and I had been practicing my presentation, accuracy, and was not under undue stress. I was even aware in advance that my decision would be to draw and then that I would need to fire quickly. Luxuries usually not available when involved with your dynamic personal-protection situation. Being assaulted by a quick, on-rushing maniac or a crazy with a knife, gun, or other weapon is certainly different than practicing range shooting skills on a paper plate from the seven-yard line.

The Tueller Rule and Drill

For many years since 1983 when Sergeant Dennis Tueller, of the Salt Lake City, Utah Police Department, developed his 21-Foot Rule and the Tueller Drill, this distance was, and is, still accepted as a safety guideline for assaults. Tueller setup a training drill where he placed an average volunteer attacker armed with an edged weapon/knife 21 feet away from an officer with a holstered handgun. On the signal, the attacker ran toward the officer to stab him and Tueller timed the attacker over the 21 feet. He determined the attacker could easily cover the 21 feet and reach the officer in 1.5 seconds. His results were widely published and subsequent validation by others have supported his results. His  police training video is entitled “How Close is Too Close?” The training objective was to determine whether the officer could draw and acurately fire upon the assailant to stop the threat before the attacker stabbed him. Was the 21 feet an adequate response parameter for deciding when to shoot or not and, if so, to draw and shoot? As you can imagine, this is highly controversial and states and jurisdictions vary a lot, as do the court decisions. There are a lot of variables to consider and many influencing factors. So, use caution when drawing your conclusions and, especially, about using the 21-Foot Rule, the 30-Foot Rule, or ANY rule for your actions. They are merely generalized guidelines and NOT absolute rules nor based on forensic research and all possible facts. Each individual SITUATION must dictate your defensive reaction, safe distance to engage the threat, and your response! Be very careful!

The question then is… Is 21 Feet enough of a cushion (reactionary gap) for you to prepare and do what you have to do to quickly defend yourself from the assailant? Many shooters believe that they can draw and deliver an effective hit on a charging assailant when the assailant starts his assault from a distance of seven yards. Experienced shooters at the range have told me “no problem,” but I have my serious doubts. Some range drills for some of my students have proven to me and them that this is not so under most situations. Also, consider whether or not the attack is in your home or on the street. Recognize that the rooms in a typical home are mostly about 21 feet or less from wall to wall, so you will probably be even closer inside your home, considering the space taken by furniture.

Tueller addressed the “reactionary gap” and concluded that sudden action is usually faster than a defensive response or reaction for humans. The closer an assailant is to you, the less time you have to defensively react to any aggressive action the assailant makes. Remember, one shot rarely stops the threat, so accurate hits are also important while you are under the time pressure.

Some Research and Court Guidance About the Rule

In 2014, Dr. Ron Martinelli, forensic criminologist, revisited the 21-Foot Rule related to police officers and concluded several key things. He said that it takes on average .58 seconds to experience the threat and determine if it is real. Then it takes an average of .56 to 1.0 seconds to make a response decision to act. Then comes access to the gun, draw, presentation, and firing, which consume more time. Some say it takes about .50 to 1.00 seconds to access and draw the gun. Of course, the location of the gun, the type of holster and concealment, and practice affect this. Others say it takes anywhere from .25 to .31 seconds then to actually press the trigger to fire it. So these factors alone add up to a minimum average requirement of about 1.89 seconds (up to 2.39 seconds or more) for me … which is more than the 1.5 seconds for the bad guy to reach you. And you have to have good hits to stop the bad guy. Further, he recognized that if the sidearm is secured in a Level III holster, it will have a slower draw-to-target acquisition time than drawing from a Level I holster or another type, e.g. pocket, ankle, or small of the back. So someone’s experience and competency with his or her holster system and particular handgun are also critical factors.

Dr. Bill Lewinski with the Force Science Research Center at Minnesota State University has also re-examined the 21 Foot Rule and made some conclusions for the police which are noteworthy for all:

Without a doubt, each deadly-force, high-risk encounter in a rapidly-changing situation is unique. This has been recognized and restated in the 1989 U.S. Supreme Court ruling in Graham v. Connor for the police. In essence, the Graham standard guides that force should be applied in the same basic way that an objectively reasonable officer would in the same circumstances. Further, that the most important factor to consider in applying force is the threat faced by the officer or others at the scene. Seems this is important to judicious use of deadly force whether you are a police officer or not. Situationally dependent and reasonable.

It seems obvious to me that many factors and situations are involved in determiing if the 21-Foot Rule is applicable. The distance, time, and accuracy factors can be influenced by other things like the fitness level of the attacker, the mental state of both attacker and defender, the level of training and weapon or handgun proficiency of both participants, drugs, the terrain and location of the encounter, the weather, ambient light, full-duty gear, dress, gloves, and so many other variables. Be careful out there.

What are your thoughts about the 21-Foot Rule, your safe distance for engagement, and why do you believe what you believe?

© 2015 Col Benjamin Findley. All Rights Reserved. This article may not be reprinted or reproduced in whole or in part by mechanical means, photocopying, electronic reproduction, scanning, or any other means without prior written permission. For copyright information, contact Col Ben Findley at ColBFF@gmail.com.