Beretta has been making quality firearms for years. In fact, I own a few Beretta firearms that I absolutely love. Recently, they have released the Pico chambered in .380 Auto to compete in the concealed carry market. Today we’re going to review this diminutive shooter.

First off, let’s talk about the size. This thing is small. The barrel is 2.7” and the overall length is only 5.1”. It is only 4.94” tall and 0.725” wide. Small. Very small. It weighs in at 11.5 ounces with an unloaded flat-plate magazine. It comes with two magazines, one flat, and the other with a finger extension. Both carry six rounds for a total capacity of 6+1. It has a nice three dot combat site system installed. The sights are dovetailed in and kept in place with a set screw, making them both adjustable (rear) and replaceable without taking it to a gunsmith.

It is sold in a cardboard box, with a nice little zip case that holds both the gun and the spare magazine. The box also contains a cable style gun lock, manual, warranty guide, a maintenance addendum discussing where to oil the slide and hammer face (terrible replication) and a nice warning from the Massachusetts Attorney General that tells you that if your gun is lost or stolen, it can be used by someone other than you. That’s valuable information.

Beretta has introduced a modular build concept with this gun, like its (slightly) bigger brother, the Nano. There is a small take down device on the right side that only needs a quarter turn and the slide slips right off. The guide rod and barrel come out conventionally. The guide rod is surrounded by two springs, an inner and outer. There are two springs presumably to help cut down on recoil for +P ammo that this gun is capable of handling.
Removing the take down pin entirely allows the user to remove the trigger assembly (Beretta refers to this as the “chassis”). This is the part that is actually serialized and represents the firearm to the Feds. There are rumors that Beretta will soon release different color grip assemblies. With this system, you can change out the grip assembly for a different color and it’ll just set you back the cost of the part, instead of having to buy an entirely new gun just for a color change. You don’t like the grip? You can stipple it yourself. If you screw it up, you can just order another assembly for about $20-$40 bucks and start over. In my opinion it’s a great concept.

The slide can be reinstalled very easily by just aligning the slide with the rails and sliding it back on. The pin will automatically rotate back into place once the slide is pushed to the rear.

The build materials are nice but not necessarily unique. While the grip assembly is made from polymer, the slide assembly is stainless steel, slide catch and guide rod, magazines and springs are also made from stainless. The overall finish is exceptional. The design of the gun from a concealed carry stand point is great. There are no parts that stick out enough on the gun to snag on anything. Even the sights are small, but easy to get a quick sight picture.

Here is where I start to take exception with this gun design. The magazine release is small and ambidextrous, however, instead of simply punching the button, this needs to be pushed down, which is not ergonomic at all. I found that changing the magazine was cumbersome at best. It was exceptionally difficult to use my strong hand thumb to press the lever down. It was easier to hold the gun with both hands and pull the release down with my trigger finger and thumb. Not exactly speedy.

The slide stop is also troubling. While its profile is great for keeping it from snagging, it is also exceptionally tough to manipulate. In addition, since there are two recoil springs, they resist pulling the slide back into the stop, making this difficult to use with small and/or weak hand grip. Once you are able to get it set, the low profile of the lever makes it troublesome to release. It can only be done when the magazine is out, or when there are rounds in the magazine. It cannot be released with an empty mag in place. The slide does have some very nice serrations on the rear to assist with gripping it to pull it back.

The trigger is double-action only (DAO) and is made of metal. It is smooth on the surface and contoured on both sides. The forward slope is nice and fits a trigger-puller nicely. The trigger pull, however, is terrible. It exceeds my scale which maxes out at 13 pounds. It stacks at the end of the pull until the break. The break happens at virtually the absolute edge of the trigger guard which makes you end in a slightly awkward position because of the distance from the rear of the grip to the now depressed trigger. It’s not overwhelmingly problematic, but it is a nuisance. The reset point is all the way back at the top of the swing. There is no detent or other indication that is has reset, it just magically resets. Now, I know that a trigger that is DAO on a pistol with no manual safety should be long and a bit stout, but I think this is probably even worse than the LC-9 trigger that I complained about in a previous article. At over 13 pounds, trigger pull is excessive in my opinion, to say the least.

The grip is small. When I say small, I mean that with the flat plate magazine inserted, I can only get my middle finger tucked up under the trigger guard, with my third and little finger dangling off the bottom of the grip. Not a great way to keep a good grip on a firearm. My wife’s smaller hands allow for a two-finger hold under that trigger guard. With the extended magazine installed I can cram all of my fingers on the grip. The grip is largely smooth on all of the surfaces, with some slight stippling on the rear edge of the grip. It doesn’t offer much in the way of providing some extra traction. At the rear of the trigger well there is a nice bevel that allows for a good area to place your strong hand thumb. So, ergonomically, I don’t find this an easy gun to manipulate. You may find it easier if you have smaller hands, but if you have any issues with hand strength, this is probably not the gun for you. 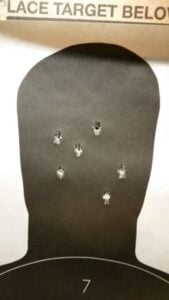 I decided this gun should be tested with both ball ammo and hollow points. For the ball ammo we used a box of Sellier and Bellot FMJ 92 grain ammo. It fired each and every round flawlessly. Felt recoil was minimal and the gun proved to be very accurate at 7 yards. The magazine changes proved to be just as difficult as I had experienced on the bench. Because of the way it has to be manipulated, it’s difficult to keep the muzzle pointed downrange while attempting a magazine change. Definitely a range master’s nightmare for a new shooter.

I also decided to work with some HPR hollow point ammo. We used HPR’s 90 grain JHP ammo, which is designed to have a lighter recoil. HPR designed this ammo with female shooters in mind according to their website, which is why it is designed to have a softer recoil and the reason I wanted to test it with this model Beretta. This ammo and the Pico are not compatible. Every single round was an FTE. I could not get the gun to run this ammo at all. I spoke with HPR reps who speculated that since their ammo is slightly less powerful, the springs were no allowing the round to properly actuate the slide and chamber another round as designed. Which leads me to believe that this gun will not work well with any ‘soft recoil’ ammo. Overall, given the proper ammo, this is a very accurate and reliably shooting gun.

I’m on the fence with this gun. On the one hand the trigger is terrible, the magazine release is awkward and the slide stop is difficult to deal with. On the other hand, the modular design is great and given the proper ammunition, it is accurate and reliable with low felt recoil. Perhaps Beretta will take another look at the overall design and make some improvements. You’ll need to go shoot one for yourself to make a final decision. Shot one? I’d love to hear your comments below.