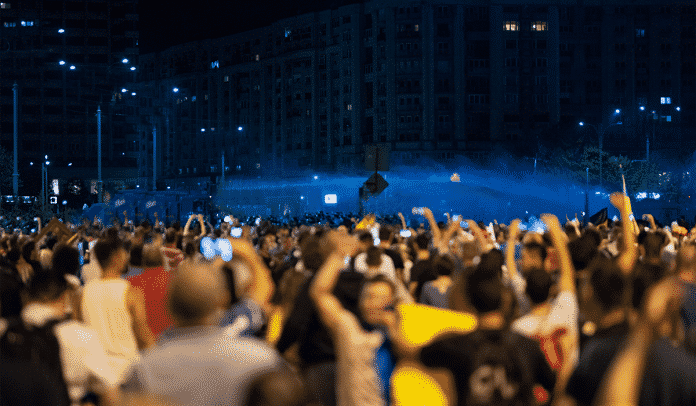 By its very nature, a crowd can be unpredictable and dangerous. Currently, our nation is again swept with civil unrest. For the armed citizen, the best solution to dealing with such demonstrations is to avoid them at all costs. However, it is possible to get caught in the middle of a demonstration through no fault of your own. If forced to defend yourself in such a situation there are several legal considerations that should be foremost on your mind. Dealing with the anxiety created by a large and aggressive crowd can lead to poor decision making.

In such chaos, circumstances that would otherwise be more straightforward can become convoluted. However, even in the midst of an aggressive crowd, there are two legal frameworks that are necessary for the self-defender to maintain in order to justify a defensive gun use or even a defensive use of less-lethal weaponry. The fact that chaos ensues when a crowd runs wild does not lift these legal obligations from the citizen.

If you find yourself caught in a situation you were unable to avoid, in which you are surrounded by a crowd that is acting violently, you could face the confusing challenge of being forced to defend yourself. An overriding consideration under such a circumstance is to maintain your role as the innocent party. This is where a number of people have gone wrong when forced to defend themselves.

A recent shooting happened in New Mexico, where a man shot a rioter who swung at him with a skateboard. At the time of this writing, we don’t know the final decisions and outcomes of this incident, so I offer no conjecture on such, but I simply point to this high-profile incident as an example of the complications involved.

In the microcosm of the shooting a legitimate case of self-defense can be made, as a skateboard to the head absolutely constitutes a lethal threat, thus warranting a lethal response. If the self-defender does not get charged then all is well for him. However, there is a video that shows what transpired before the shooting, and it is here that we find evidence that might hurt this individual’s defense.

Prior to the shooting, in which the self-defender shot someone who swung a deadly weapon at him, this person was getting aggressive with other people in the crowd over the vandalism of a statue. This video evidence might be used to compromise the legal standing of this armed citizen. This example simply illustrates that the best tactic is to not be there in the first place, and if caught in such a situation, leave immediately. Showing yourself as the innocent party is much easier to do if you are, indeed, innocent of any aggression or escalation of the violence.

While I personally find the destruction of statues and other public property reprehensible, I am determined to suggest that the armed citizen avoid taking part in such protests, or anti-protests. Such situations and environments are simply rife with possible physical and legal dangers. Consider the above example; imagine if the same individual had simply been minding their own business and walking by when accosted, compared to being part of the violence proceeding the shooting. Which circumstance will work out better for legal defense?

Proportionality refers to the principle of meeting a threat with only the force necessary to neutralize the danger. A lethal threat to your life, or the life of another innocent party, is legitimately met with a lethal force response. Even here, however, lethal force is legally acceptable only to the point of ending the threat. If the threat is neutralized, executing the attacker while already down and rendered immobile is not justified. Likewise, chasing down and executing a threat that runs away at the first sign of resistance is not justified. Such concepts may seem straight forward, but in the chaos of mob activity, much can arise to convolute good decision making.

Similarly, riots and protests can foster scenarios where a lethal response is not justified, but a less-lethal response is. Self-defense with empty hands or self-defense with a less-lethal tool like pepper spray may serve a purpose, but here also the self-defender can easily make decisions that will have a significant legal ramification. Even in terms of using open hands or OC spray, a miscalculation can quickly lead to a charge of assault. Somebody screaming obscenities at you, but not physically threatening you, is not a justification for punching or spraying that individual. An aggressive shove, however, or certainly a punch, may warrant such a response.

Legally, in self-defense, the response needs to be proportional to the aggression. A lethal threat justifies a lethal response, a non-lethal, but aggressive action justifies a less-lethal response. In either case, the chaos of crowd activity can lead to clouded judgment, but the laws of self-defense are not suspended during demonstrations.

We live in dangerous and confusing times. Avoidance is the best possible way to deal with civil unrest, but if you are caught in a violent crowd despite your best efforts to avoid it, act with prudence and within the law. Lethal force is the last option when there is no other choice. If pressed into a bad situation in which you must use force to defend yourself, by all means, protect yourself and your loved ones. However, if at all possible, avoid violent crowds and don’t be there in the first place.